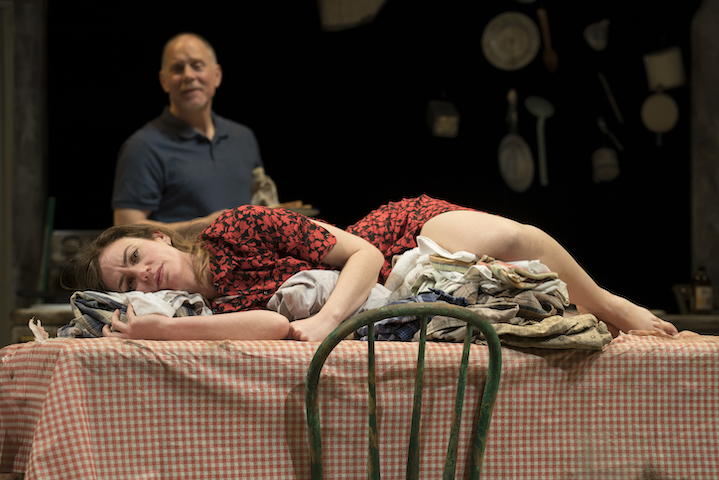 Any play that begins with a scenic coup de théâtre that causes you to say “wow” before a single word of dialogue is spoken had better be prepared to follow up with an ever-higher series of wow factors. When that doesn’t happen, as in the only occasionally effective revival of Sam Shepard’s 1977 Curse of the Starving Class, the play itself becomes little more than an extended anticlimax.

Curse of the Starving Class, the first of Shepard’s quartet of dysfunctional “family dramas” that riveted audiences in the late 70s and early 80s (the others being Buried Child, True West, and Fool for Love), is getting its first New York revival in 20 years. Terry Kinney (The Price), a frequent Shepard collaborator, directs.

Kinney’s unexciting, emotionally uninvolving production starts with a bang as Julian Crouch’s naturalistically detailed (and overly expansive) set of a decrepit kitchen on a rundown, failing California avocado farm suddenly cracks and crumbles before our eyes, accompanied by impressive sound and music (created by Rob Milburn and Michael Bodeen)­­. It settles into a dusty ruin in which pieces of wall hang suspended along with pots, pans, utensils, and other daily detritus. This symbol of familial and social disintegration is further shattered near the end by a pair of hired thugs; the events in between only fitfully match these moments.

As in so many Shepard plays, extreme realism mingles with surrealism and symbolism. There are rambling, richly imagistic monologues; fiercely aggressive situations; and captivating visuals, like a scene-stealing maggoty lamb or a refrigerator into whose empty interior the play’s family members keep searching. They deny they’re part of “the starving class,” but they’re clearly hungry for spiritual and emotional fulfillment. The titular curse refers both to what Richard Gilman called “the Dark Side of the American Dream” and women’s menstrual cycle.

Broader themes concern capitalistic greed’s desecration of the land and its people and the disintegration of the American family. Despite its tragic arc, the play incorporates considerable humor; this production, though, too rarely realizes those comical dimensions.

The plot itself is rather familiar, its central situation depicting the Tate family, headed by a violence-prone, disheveled, alcoholic fool of a father, Weston (David Warshofsky, Biloxi Blues); his having kicked in the kitchen door the night before is the impetus for Crouch’s scenic deconstruction. Weston’s fed-up wife is Ella (Maggie Siff, TV’s “Billions”) and their offspring are the sullen Wesley (Gilles Geary) and the angry, straight-A’s teenager, Emma (Lizzie DeClement), who’s having her first period. 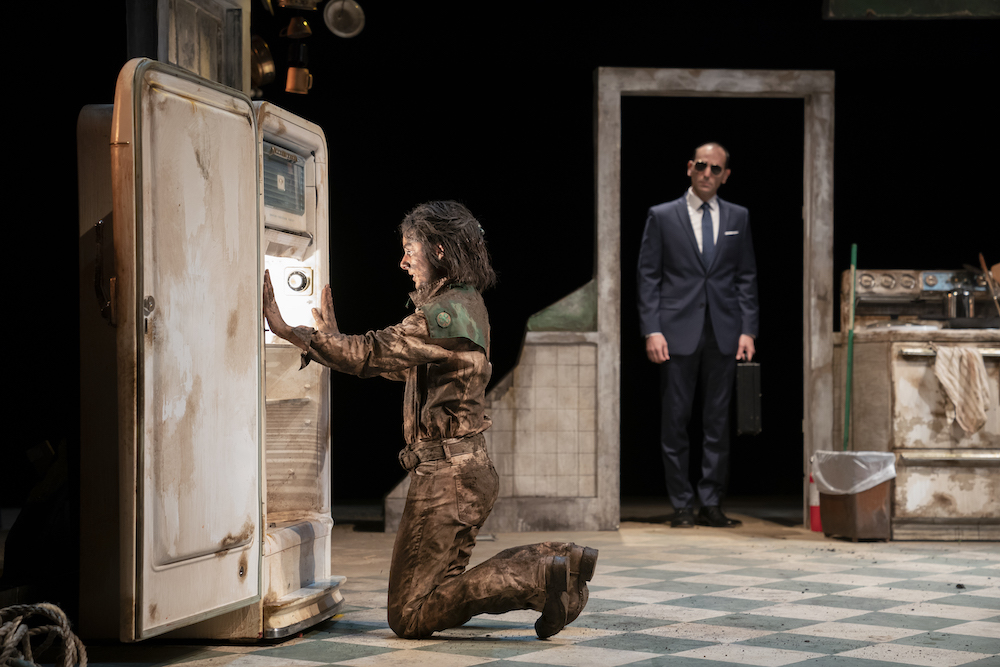 The household is a snake pit of vituperative relationships. As a Tate frustratedly asks, “What kind of family is this?” Ella, Wesley, and Emma each dreams of escape: Ella by traveling to Europe, Emma by fleeing to Mexico, Wesley by going to Alaska (although he’s the only one willing to stay). All comes to a head when Ella’s plan to sell the property to a shady lawyer, Taylor (Andrew Rothenberg), clashes with the similar idea of the debt-ridden Weston, who’s sold it to someone (Esau Pritchett) with plans to turn it into a steakhouse.

Few moments find the right balance between Shepard’s earthy realism and his poetic demands. Natasha Katz’s exquisitely modulated lighting captures the shifting moods much more effectively than the prosaic performances, which sometimes makes it difficult to accept the reality behind the more theatrically exaggerated scenes. Emma, for example, having been dragged by her horse so severely that we can see barely a clean spot on her, shows no sign of injury, while characters asleep on the kitchen table keep snoozing despite enough sound and fury to wake the dead.

It’s interesting to see Maggie Siff, so glamorous on “Billions,” play dowdy in curlers and cold cream, although she looks a bit spiffier (as costumed by Sarah J. Holden) as the play progresses. Like her costars, she gives a straightforward but not especially distinctive performance. And the casting of Flora Diaz, a diminutive actress using a Hispanic accent, in the small role of policeman Sergeant Malone seems more a distracting bow to political correctness than to the play’s dramatic needs.

This revival of Curse of the Starving Class may not be cursed but it certainly doesn’t cast any spells.