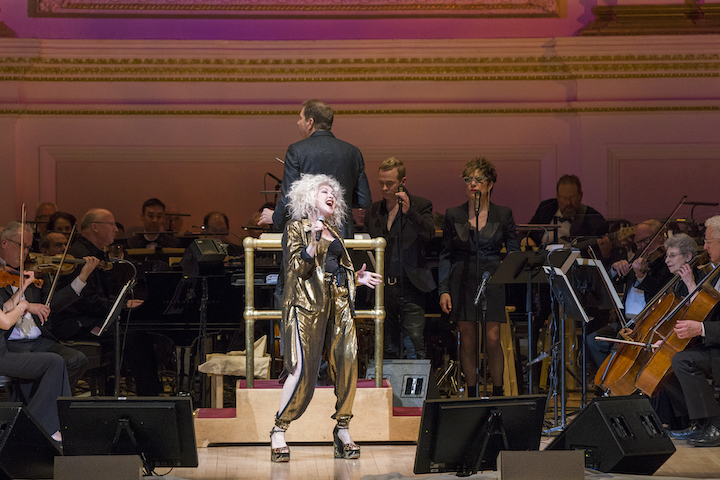 Pop icon Cyndi Lauper is making waves this season. The singer-songwriter recently said farewell to the Broadway company of Kinky Boots, for which she wrote the music and lyrics. The musical won six Tony Awards and played more than 2,500 performances. But the spotlight on Lauper is still shining bright, as her body of work and advocacy was celebrated at The New York Pops’ 36th Birthday Gala.

Titled, Hat Full of Stars: The Songs of Cyndi Lauper, the packed house at Carnegie Hall’s Isaac Stern Auditorium was thrilled by an array of stars from Broadway and the music industry. Led by music director Steven Reineke, The New York Pops is the largest independent pops orchestra in the United States, and it was thrilling to hear its full force interpret Lauper’s songbook.

Standout performances included the instrumental opening “Hat Full of Stars,” arranged and orchestrated by Greg Anthony; the electric Lena Hall with the children of Ronald McDonald House New York singing “The Goonies ‘R’ Good Enough; and several selections from Kinky Boots, including one of its original stars Stark Sands singing “Soul of a Man” and the powerhouse vocals of Alex Newell (Once on This Island) singing “Hold Me In Your Heart.” Lauper closed out the evening, singing “A Part Hate,” a song that was originally written for her debut album She’s So Unusual.

Lauper, who has been a longtime LGBTQ ally and advocate, will be performing at the WorldPride opening ceremony on June 26, 2019, at Barclays Center in Brooklyn, New York. The concert kicks off dozens of events throughout New York City and will feature host Whoopi Goldberg, Chaka Khan, Ciara, Billy Porter and more.

West Coasters can get their Lauper fix, too! She’ll be performing with the Hollywood Bowl Orchestra on July 12-13, 2019.