Top Posts
Ingrid Michaelson Rings in the Holidays for Two...
Review: ‘& Juliet’ Is A Daffy, Absurdly Joyous...
Jinkx Monsoon & BenDeLaCreme’s ‘The Jinkx & DeLa...
Review: Victoria Clark Shines in the Refreshingly Original...
Review: Mike Birbiglia Astounds in ‘The Old Man...
A Sondheim Stocking Stuffer: New Book Offers Insightful...
From ‘Tattooed Lady’ to ‘KPOP,’ Plus A Quick...
Museum of Broadway Will Open Its Doors November...
Previews Have Begun for One-Man ‘A Christmas Carol’...
Strong Performances Aren’t Enough to Save ‘Almost Famous’
Home Beyond Broadway ‘Cyrano’ – a New but Imperfect Take on Unrequited Love
Beyond BroadwayReviews 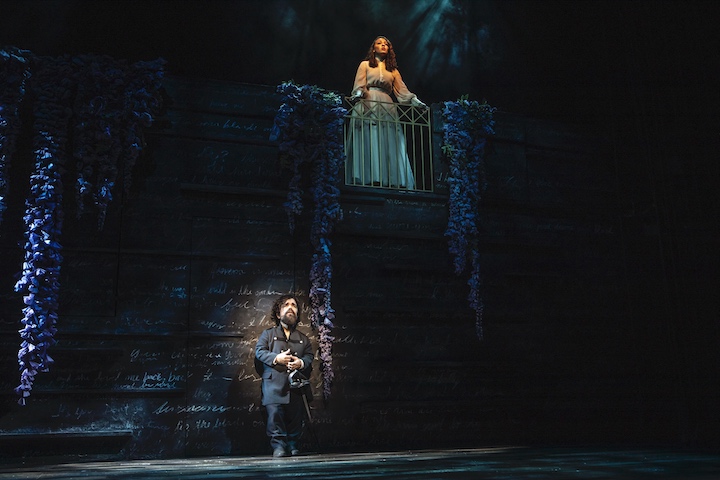 Though Cyrano (Peter Dinklage) presents a great front — charming those around him with humor and witty repartee, exemplifying courage and adeptness on the battlefield, and sacrificing deeply of himself for the happiness of true love — these three words can change the course of a man’s life.

They are spoken by De Guiche (Ritchie Coster), an arrogant aristocrat who sees Cyrano as a minor roadblock in his pursuit of Roxanne (Jasmine Cephas Jones), whose romantic interests lie in the handsome but intellectually challenged Christian (Blake Jenner). 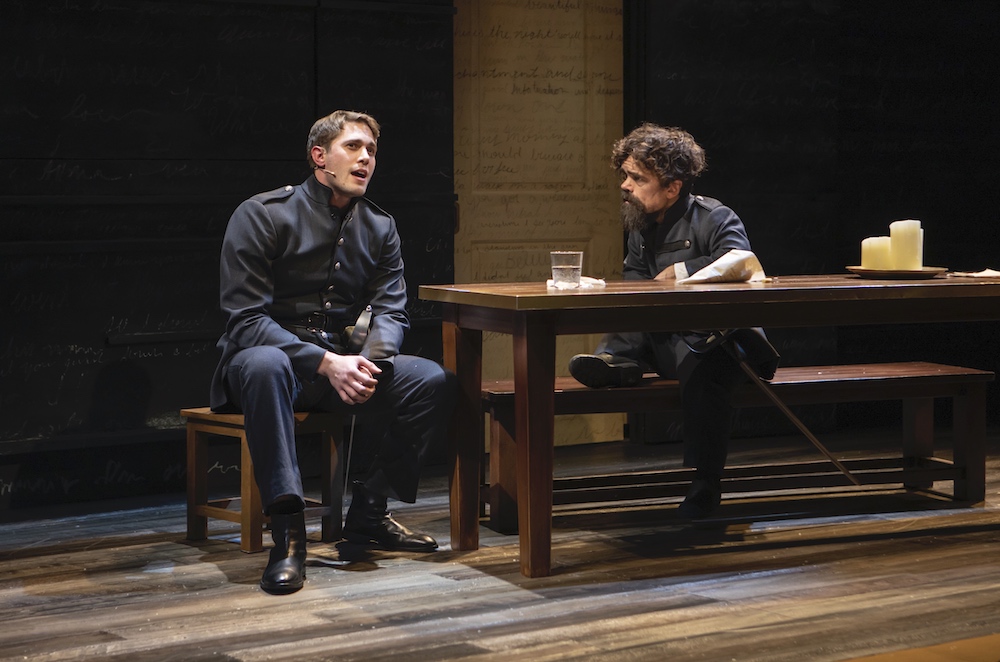 Director Erica Schmidt has adapted Edmond Rostand’s 1897 play Cyrano de Bergerac into a historically ambiguous mash-up of style and substance. Such intersections are not unfamiliar to theatergoers. Duncan Sheik and Steven Sater based their Tony-winning pop musical Spring Awakening on the 19th-century play of the same name. Here, Schmidt delivers a moody, 12-actor chamber piece, underserved by a forgettable score.

Featuring music by Aaron and Bryce Dressner and lyrics by Matt Berninger and Carin Besser (all associated with the Grammy Award-winning indie rock group The National), Cyrano’s score rarely lifts off the page, except for when Jones injects the material with a melancholy lilt. Dinklage, on the other hand, loses Cyrano’s command when he opens his mouth to sing, the lyrics spiraling into a murky baritone that misses the mark on what music in musicals should do: reach beyond the emotional breadth of what a character would normally speak.

Dinklage finds more solid ground in Schmidt’s words, which purposefully intersect modern quips with the poetic lyricism of Rostand’s original. He proves again (having last appeared on the New York stage in Classic Stage Company’s A Month in the Country) a cerebral mastery of the text. He equally commands an emotional depth as he says, “I have told you nothing, my love” to Roxanne as she questions the source of years of romantic correspondence.

But it is in this juxtaposition that Cyrano as a musical fails to compel. Unlike the megahit Hamilton playing uptown, Schmidt’s adaptation loses its sense of place through its anachronisms, occasionally buoyed by Jeff and Rick Kuperman’s choreography.

The director-choreographer brothers (MCC Theater’s Alice by Heart) creatively play with time and space, best exemplified when Cyrano, Christian and De Guiche find themselves on the front lines of the siege at Arras. Though Schmidt underserves its historical context leading up to their deployment, the atrocities come to life through haunting, suspended imagery — reminding us that the ravages of conflict linger long after the dust settles on the battlefield. 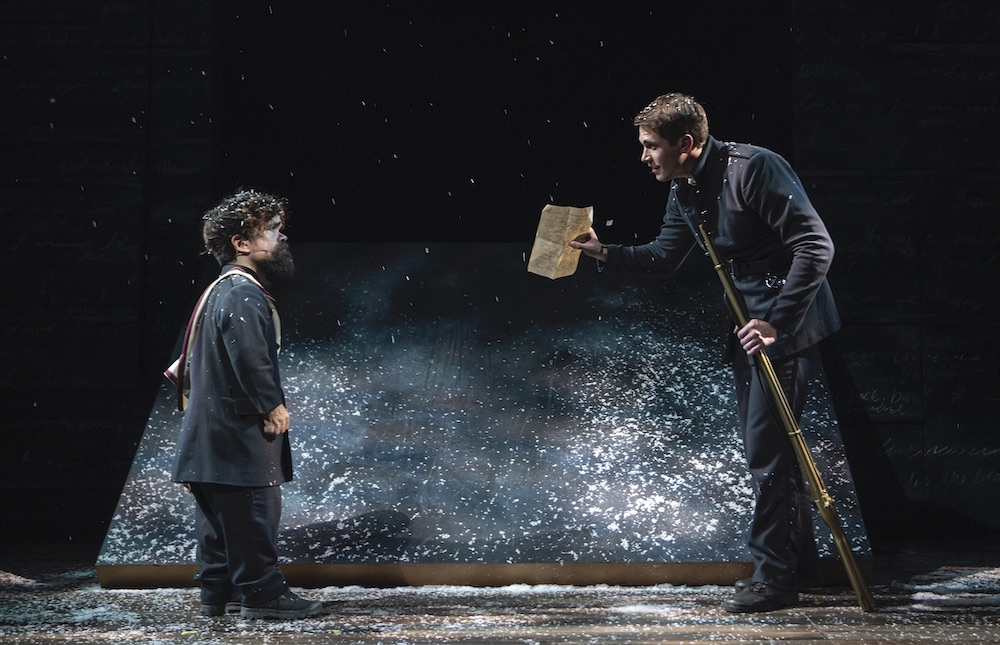 The New Group’s temporary home at the Daryl Roth Theatre doesn’t do the production any favors, its sprawling makeshift proscenium an awkward configuration for Christine Jones and Amy Rubin’s simple yet effective scenic design. Those sitting outside of the center section (particularly in rows closest to the stage) may need chiropractic adjustment after the 100-minute, intermissionless show.

Cyrano, regardless of its musical shortcomings, presents a timely commentary on who and how we love. How quickly in this “swipe right” era we diminish the value of one another. Cyrano proclaims pride as his last defense for denying Roxanne his true love. But perhaps it is fear. Love does not exist without loss. And that’s a lesson worth revisiting.