Top Posts
‘Company’ to Hit the Road on North American...
Meet the Full Cast of ‘Shucked,’ Coming to...
Full Cast for ‘Parade’ Announced
Stephen McKinley Henderson Gives the Performance of His...
The McKittrick Hotel Announces the Return of ‘The...
Broadway Stars Honored with Academy Award Nominations
Taylor Trensch, Danny Wolohan, and More Join the...
A Gay Road Trip Comes to The Brick...
Maude Apatow of ‘Euphoria’ is the Next Audrey...
Tony Award Winners to Star in ‘Hercules’ at...
Home Beyond Broadway Papa, Can You Hear Me? “Daddy” Reverberates Off-Broadway
Beyond BroadwayReviews 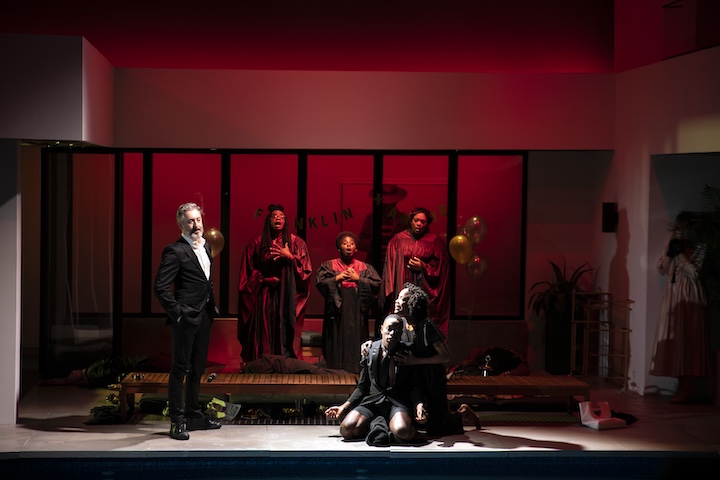 “I want that,” was my first thought upon entering The Romulus Linney Courtyard Theatre. Matt Saunders’ Bel Air-inspired, mid-century residential pool, surrounded by glass, concrete and clean lines is a theatrical version of my dream backyard. But as playwright Jeremy O. Harris proves in his new Off-Broadway play “Daddy,” dreams and the reality to achieve them come at a price.

Harris has saturated the New York theater scene this season with Slave Play at New York Theatre Workshop earlier this year, this production (presented by The New Group and The Vineyard Theatre), and countless interviews and profiles from the New York Times to Brooklyn Rail, among others. A crafty headline writer for Out dubbed him “the queer black savior the theater world needs.” Although “savior” might be a bit over-the-top, his complex, genre-pushing exploration of sexuality, power, social identity, and familial relationships is a voice that absolutely needs to be heard. 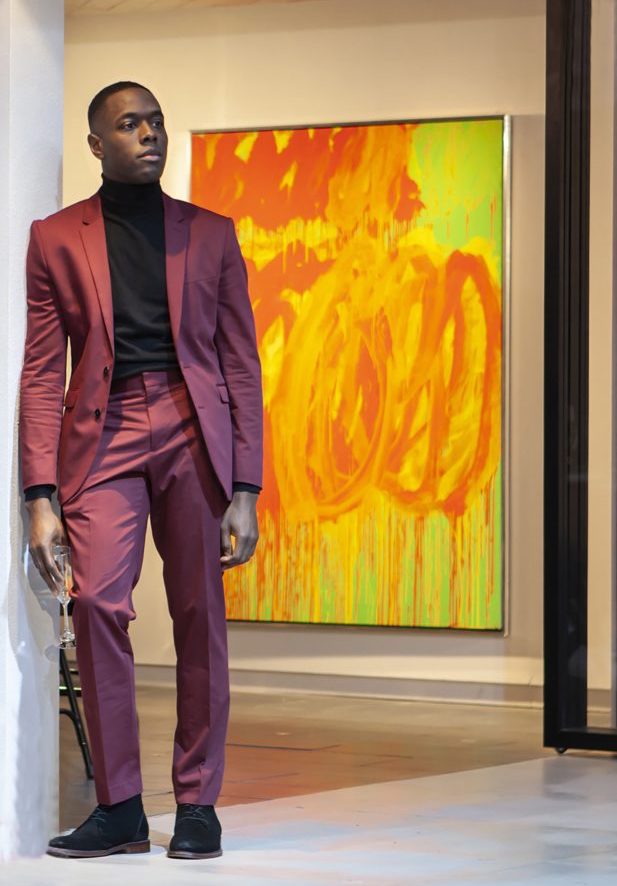 Back to that house. Billed as “Daddy” A Melodrama, Harris’s sprawling three-act play depicts what happens when Franklin (Ronald Peet) quickly moves into his one-night stand’s luxe digs after a drug-fueled night of revelry.

The fascinating complexities in Harris’s play come from the sexually and intimately charged relationship between the two men, particularly after Franklin’s mother Zora (Charlayne Woodard) arrives for his gallery exhibit opening, a collection of what she calls “coon babies.”

Through three acts that vacillate between intimate realism, melodrama, karaoke (George Michael’s “Father Figure” is featured prominently throughout), and a mini gospel choir (Carrie Compere, Denise Manning and Onyie Nwachukwu) we come to learn that Franklin’s estranged father may not have been the dead-beat dad that his mother portrayed him to be.

Once Franklin’s underlying trauma begins to emerge, Harris offers strokes of absurdism that, at least for this reviewer, result in a tempering of emotional connectivity. We repeatedly hear Franklin’s cell phone ringtones and voicemail message, implying, perhaps, the long-reaching efforts of his biological father to connect.

Harris is onto something in terms of the impact of fatherhood. Dr. Diann Cameron-Kelly’s “Generative fatherhood and children’s future civic engagement,” published in the Journal of Human Behavior in the Social Environment, makes the case that “generative fathering, as a protective factor, helps nurture and guide the child toward understanding the world and how it works, and helps the child forge an engaged role within society.” Conversely, one might argue that the lack of a paternal presence can have devastating effects.

In his script, Harris mentions David Hockney’s “Portrait of an Artist (Pool With Two Figures)” for stylistic reference. And while that might be realized in“Daddy”’s visual identity, Harris’s play feels more like Jackson Pollock: abstract, messy, yet utterly captivating.