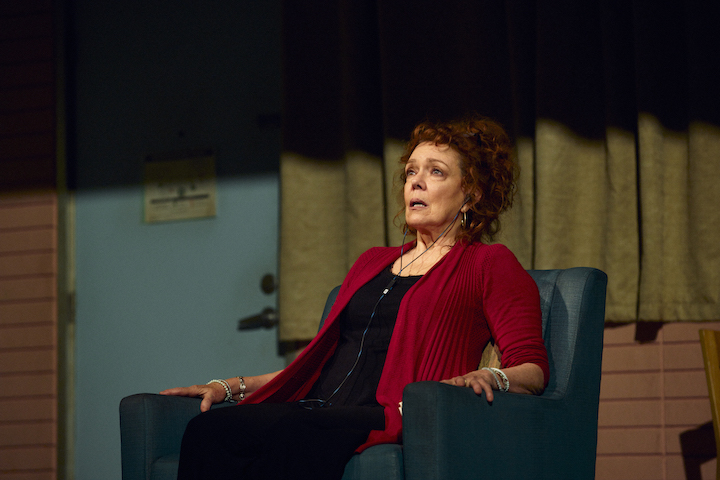 When The Broadway Blog first reviewed the Off-Broadway production of Dana H., critic Matthew Wexler described it as “nothing short of mesmerizing.” According to last night’s opening night at the Lyceum Theatre, the Broadway transfer is equaling as compelling.

Playwright Lucas Hnath (Hillary and Clinton, A Doll’s House, Part 2) asked fellow theater-maker Steve Cosson to interview his mother about a series of events that took place more than two decades ago. Those taped interviews have been spliced together to create an audio track. Not a word of dialogue is spoken by actress Deirdre O’Connell, but rather, impeccably lip-synced — a description that barely scratches the surface of O’Connell’s riveting performance.

Here are some perspectives on the Broadway transfer:

“The show will have audiences leaning forward to hear each and every revelation — and, following this Broadway run, it seems likely to find welcoming homes in many cutting-edge venues around the country.” — Frank Rizzo, Variety

“Some small productions work best in the spaces where they were built. Moving a play from a little theater to a big one is risky — an intimate show’s magic can fail when you try to scale up in size. Not so with Dana H., though, the unlikely crown jewel in this bizarre Broadway season. The breathless, brilliant show has somehow only gotten stronger in its Broadway transfer.” — Helen Shaw, Vulture

“…But Dana’s words, and O’Connell’s performance that is by turns steely and vulnerable, goes to a deeper level of why and how. Her mesmerizing account of a five-month waking nightmare pulls us so deeply into the psyche of abuse that we fully comprehend the utter surrender, the no-way-outness.” — Greg Evans, Deadline