Top Posts
‘Company’ to Hit the Road on North American...
Meet the Full Cast of ‘Shucked,’ Coming to...
Full Cast for ‘Parade’ Announced
Stephen McKinley Henderson Gives the Performance of His...
The McKittrick Hotel Announces the Return of ‘The...
Broadway Stars Honored with Academy Award Nominations
Taylor Trensch, Danny Wolohan, and More Join the...
A Gay Road Trip Comes to The Brick...
Maude Apatow of ‘Euphoria’ is the Next Audrey...
Tony Award Winners to Star in ‘Hercules’ at...
Home Beyond Broadway What Makes a Marriage? ‘Daniel’s Husband’
Beyond BroadwayReviews It is bad form for theater critics to leave a performance early, but there is no rule stating that they can’t wish to leave before the final bow. Within 30 minutes of Daniel’s Husband, now playing at Off-Broadway’s Westside Theatre, I made that wish.  My inner monologue went something like this: “Haven’t audiences seen the same tired and clichéd depictions of fabulous, successful white gay men in their spectacular apartments, sipping wine and expensive scotch, discussing art, exchanging bitchy bon mots and burning the tops of creme brulee (in this case, Rosemary Vanilla Bean Creme Brulee) Are you kidding me?”

Then, like life itself, Michael McKeever’s play changed in an instant — and I was hooked.

I pushed Primary Stages’ critically praised drama from my radar when it played downtown’s Cherry Lane Theatre last year, a decision based solely on the synopsis and my poor, hasty judgment. “Certainly,” I reasoned,  “There can’t be anything new or enlightening to add to the conversation on gay marriage, right?”

“The entire concept of marriage, I find it outdated, musty and fundamentally wrong  An antiquated contract based more on financial and communal gain than the result of any true emotional connection… An archaic institution — forged in that crucible of all things evil: religion — that, over the years, has been distorted into some putti-infested, Victorian-laced, curly-cue covered concept created by Madison Avenue for the sole purpose of — once again — making money.”

Daniel, on the other hand, is a fearless romantic: To discuss the plot any further would reveal too much. What I can say is that it completely caught me off guard unlike any other time in the theatre. As I sat stifling tears and dabbing my eyes, I realized that I wasn’t alone in my reaction. Nonetheless, I dashed to the exit and wept uncontrollably for a few minutes.  Since then, I still cannot seem to shake this play from my mind.

Daniel’s Husband is not merely about gay marriage. It is about marriage and commitment between any two consenting adults. Our philosophies and ideologies may be our own, but in cases like this, they are nothing more than pipe dreams if they do not align to legal principles.

Casting director Stephanie Klapper and director Joe Brancato have maintained the same cast from the Primary Stages run. It turned out to be a wise decision. Broad-shouldered Montelongo exudes supreme confidence at the top of the play. By the end of this emotionally draining piece, he has dwindled into a vulnerable soul full of doubt and disillusion. Spahn is also delivering a heart-wrenching performance (an often overused descriptive, but one that seems entirely appropriate in this case.) Leland Wheeler and Lou Liberatore provide some early comic relief but also offer more poignancy as the play progresses. Daniel’s mother Lydia (Anna Holbrook) is a tricky role to play. She is completely overbearing and yet Holbrook allows us to see underneath her veneer of affluence and control. Below the surface, Lydia is a determined mother who would sacrifice her own life for the sake of her children.

Collectively, the ensemble is superb, bringing truth and authenticity to McKeever’s high stakes drama. Brian Prather’s picture-perfect set offers a stark contrast to the messy nightmare these characters must face.

Daniel’s Husband embodies what quality playwriting should do. It surprises, engages, entertains, and challenges your own worldview without being didactic. In hindsight, I’m glad I stayed committed to this 90-minute relationship.

Our cast is giving you the inside scoop on what you can expect to experience at #DanielsHusband. Performances begin tonight at the Westside theatre! 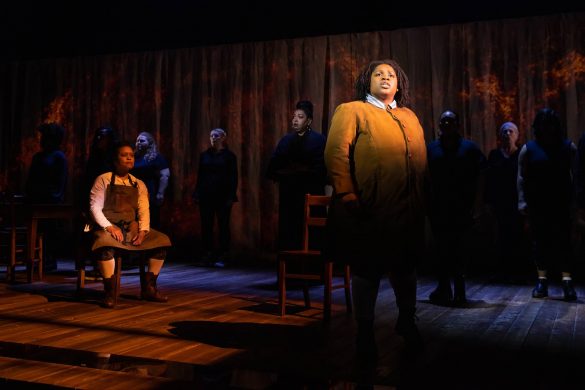