Fifty Shades of Grey takes on an entirely new meaning in David Byrne’s American Utopia, a theatrical concert inspired by his 2018 album of the same name and now featuring a globally sourced ensemble of musicians, singers and dancers.

Fans of Byrne’s nearly 50-year career are flocking to the Hudson Theatre to see the Grammy winner (for the score of The Last Emperor), and what they’ll find is a charming theatrical take on Byrnian philosophy.

“These songs don’t describe this imaginary and possibly impossible place,” Byrne describes in his description of the album, “but rather they attempt to describe the world we live in now — and that world, when we look at it, as we live in it, as it impacts on us — immediately commands us to ask ourselves — is there another way? A better way? A different way?”

His sense of humor peeks throughout the percussion-heavy score, with political nods both subtle and assertive:

I see the states, across this big nation
I see the laws made in Washington, D.C.
I think of the ones I consider my favorites
I think of the people that are working for me

Byrne, born in Scotland, then arriving in the U.S. with his family by way of Canada, recognizes that the American Dream is not without a price. Throughout the evening, he calls the audience to action, encouraging all to register to vote in the lobby through a collaboration with HeadCount. 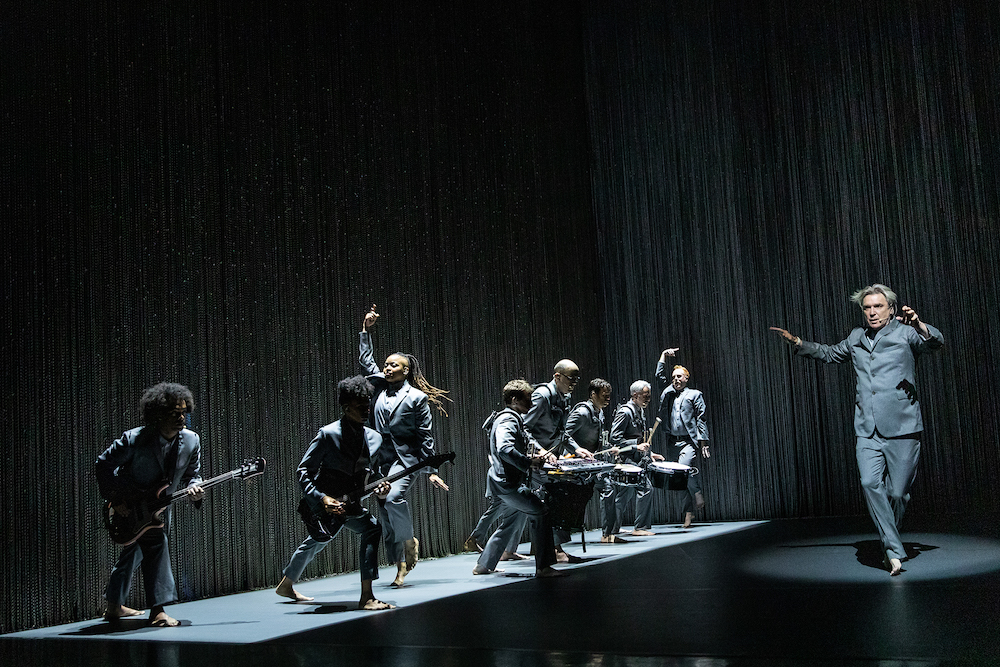 In addition to tracks from American Utopia, Byrne interjects the song list with fan favorites, like “Once in a Lifetime” from Talking Heads’ 1980 album Remain in Light. Heard in the context of the evening, “you may ask yourself, well how did I get here?” takes on new meaning. He also, with permission from Janelle Monae, performs “Hell You, Talmbout.” The powerful call-and-response, first performed at the 2017 Women’s March on Washington, reminding us of the traumas from discrimination and police brutality.

David Byrne’s American Utopia, though shaded with gravitas, is ultimately an optimistic call to action. The powerhouse team of creative consultant Alex Timbers, choreographer Annie-B Parson (the pair collaborated on Byrne’s Here Lies Love), and musical directors Karl Mansfield and Maro Refosco, bring Byrne’s songs to life. Singer-dancers Tendayi Kuumba and Chris Giarno frame Byrne in an ever-shifting cocoon of movement, at times a jangled mass of limbs and at others with fluid grace. Outfitted with cordless mics, the ensemble moves freely throughout the space, each offered moments in the spotlight.

No credit is given for the simple yet effective set design, three massive chain walls that rise from the floor into the theatre’s rafters. Its symbolism — a penetrable barrier that separates us from them, or this world from the next — reverberates throughout American Utopia.

“We’re on a road to nowhere,” sings Byrne and his merry band. But how we get there… well, that’s the magic of David Byrne’s American Utopia.