Top Posts
‘Company’ to Hit the Road on North American...
Meet the Full Cast of ‘Shucked,’ Coming to...
Full Cast for ‘Parade’ Announced
Stephen McKinley Henderson Gives the Performance of His...
The McKittrick Hotel Announces the Return of ‘The...
Broadway Stars Honored with Academy Award Nominations
Taylor Trensch, Danny Wolohan, and More Join the...
A Gay Road Trip Comes to The Brick...
Maude Apatow of ‘Euphoria’ is the Next Audrey...
Tony Award Winners to Star in ‘Hercules’ at...
Home Beyond Broadway David Greenspan to Perform Tour de Force Production of Gertrude Stein’s ‘Four Saints in Three Acts’
Beyond Broadway 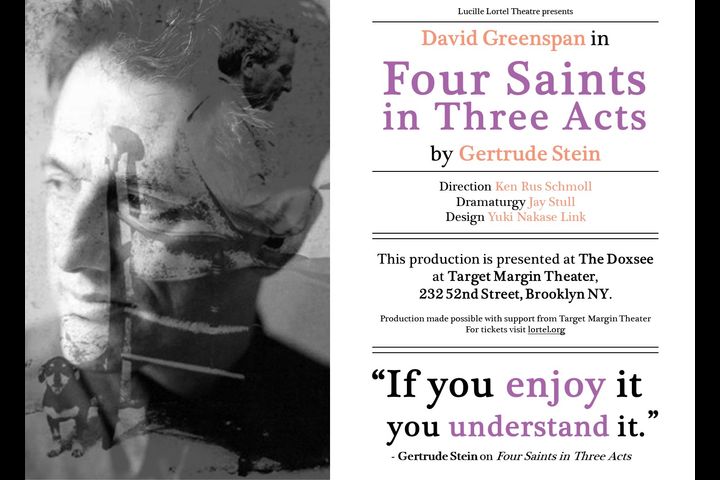 Four Saints in Three Acts is a culmination of Greenspan’s more than decade-long journey into creating a tour de force trilogy of solo interpretations of plays from the 1920’s. These previous works included various genres such as The Patsy, a playful comedy by Barry Connors and Eugene O’Neill’s experimental six-hour dramatic play, Strange Interlude. In Four Saints in Three Acts, Greenspan concludes this ambitious series with his interpretation of a radical libretto by famed modernist writer and art collector Gertrude Stein. Originally set to music by Virgil Thomson, Greenspan will perform the script only, allowing a lyrical interpretation to set the tone for an evening where sound and words delight the senses.

Four Saints in Three Acts is noted for its non-linear structure that speaks to the internal and external lives of artists embodied by the play’s “saints.” In this work, the saints occupy and inhabit every word and syllable, toying with the playfulness of language and creating unconventional expressions and depictions of the human experience. With no discernable plot, the work exemplifies Stein’s love of “emotion and time” rather than “story and action” and allows audiences to enjoy a lyrical journey that doesn’t end at a finite destination.

Through Greenspan’s perfectly honed delivery employing rhythm, cadence, wordplay, and rhymes, coupled with raw physical motion, audiences will bathe in a range of emotional moments through the sheer enjoyment and pleasures of language, sound, and performance.

“If you enjoy it, you understand it,” Gertrude Stein had said on Four Saints in Three Acts.

“ Four Saints in Three Acts is an opportunity to release yourself from the boundaries of traditional theater through David Greenspan grappling with the singular theatrical imagination of Gertrude Stein. By turns hilarious, absurd, and introspective, this work takes you on an unexpected ride via language and through human experience,” said Ken Rus Schmoll, the play’s director.

“I am convinced that the script itself for Four Saints in Three Acts has theatrical merit and that performing it without the music will bring out its unheard nuances and subtleties — both dramatic and comedic,” said Greenspan.

The production of Four Saints in Three Acts is made possible with support from Target Margin Theater. Performances run September 15 – October 9, and tickets can be found here.