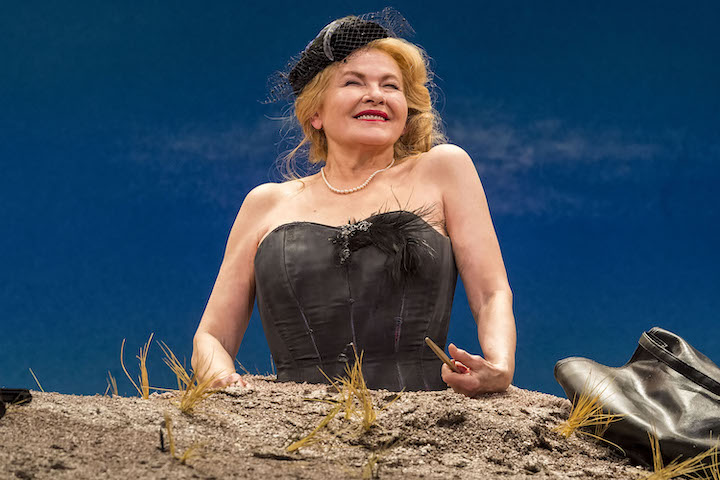 Fear not. Though the title Happy Days may first evoke the classic 70s sitcom starring Henry Winkler and Ron Howard (or the 2006 stage musical of the same name along with other screen-to-stage adaptations that most would rather avoid), Center Theater Group’s presentation of Samuel Beckett’s dystopian allegory (originally produced at Yale Repertory Theatre) breathes new life into the modernist playwright’s work, thanks, in large part, to a stunning Dianne Wiest.

Happy Days shines a blinding light on a corseted dame named Winnie (Wiest), found inexplicably buried from the waist down in a sloping mound of thirsty, mostly dead land that could easily be seen as a patch of Earth in the current era of climate change (Izmir Ickbal’s scenic design is eye-popping).

A close distance away is her husband Willie (Michael Rudko) who, while physically unconstrained, functions with some restrictions of his own, namely voice and visibility. He remains silent and out of Winnie and the audience’s view for the majority of the action.

Far be it for the loquacious Winnie, cut off from her legs and loins in Act One then entrapped up to her neck in Act Two, to suffer such a fate! She is wholly expressive and intentionally optimistic: a woman who fixes her gaze on the sunny side of the street, metaphorically and in this case literally, since there are really no other options. Words, words, words… spotlighted by the scorching sun, running upside down and all around the mountain of her brain and heart. Words that reinforce soothing daily habits or elicit “happy memories,” Emily Post-like positive self-talk, a recount of sexual trauma, and philosophical musings such as, “The sadness after song. Have you run across that, Willie? In the course of your experience. No? Sadness after intimate sexual intercourse one is familiar with, of course.”

When Happy Days opened in 1961 at New York City’s Cherry Lane Theatre, women were joining the second wave of feminism and organizing around the issue of reproductive freedom (the FDA approved women’s oral contraception for the first time in 1960). The theater was entering a new era, too, moving away from naturalism and into the realm of the absurd (see Martin Esslin’s 1962 Theatre of the Absurd for more on Beckett’s position as a defining voice in this canon). Cut to 2019 and recent attempts at restricting and controlling women’s bodies through draconian state laws against abortion. Against this social backdrop, looking at Winnie and her hijacked womb, uterus and ovaries feels absurdly disturbing. (Chicago’s Jackalope Theatre Company recently tackled this subject matter in the compelling In the Canyon last season.)

Happy Days functions as a long monologue with speed bumps (well-paced and pointedly executed under James Bundy’s direction) as Winnie’s words progressively accelerate but fail her. In an effort to self soothe, her free appendages handle personal items found in a black tote — from a looking glass to a revolver — or hold a parasol overhead until at one point it bursts into flames (an odd moment that brought a confusing puff of white smoke, but no fire).

Winnie’s mental state is compounded by continuously blaring bells and relentless sunshine (Steven Strawbridge’s extreme lighting walks a fine line between necessary theatricality and audience discomfort), which illuminates her surface but can never reveal her depths. In Wiest’s more than competent hands, layers and nuances heighten the storytelling, which swings from funny to strange to heart-wrenching. Most of the laughs come from Wiest’s masterful changes in intonation, rhythm and articulation (“What?” and “No, no” in this production have the same landing effect as her iconic “Don’t speak!” line from the film Bullets Over Broadway). The way in which she handles the text’s twists and turns, and obliges Beckett’s rigorous stage directions while still conveying spontaneity over premeditation, is extraordinary.

Wiest, a veteran actor of both stage and screen (she won Oscars for the aforementioned Bullets Over Broadway as well as Hannah and her Sisters), proves once again what a fierce and disciplined artist she is by showcasing the triple play of humor, vulnerability and strength that has defined her career. With more than a few sections of text drawn from Shakespeare, Milton, and other classical authors, plus language that may fly directly over some audience members’ heads (words like “setae,” “emmet” and “gossamer,” to name a few), her delivery becomes necessary to stay connected to the action.

Two themes emerge in Beckett’s work. First, our existential fate. Winnie contemplates, “Shall I myself not melt perhaps in the end, or burn, oh I do not mean necessarily burst into flames, no, just little by little be charred to a black cinder?” And second, how we define ourselves as couples rather than individuals. In her anticipatory grief, she questions, “What would I do if you’re gone? What would I do between waking and sleep?”

Winnie asks, “Do you know what I’d be if I could see you? I’d be a different woman. Unrecognizable.” Yet she yearns to be seen and heard. Winnie’s immobilization and exposure to intense heat and light are not the worst of her conditions. Is Winnie dying inside because she is not witnessed in her totality? In Beckett’s world, this appears as a literal representation, but when she wonders, “Was I lovable, once, Willie? Was I ever lovable?” it’s easy to recognize that we’ve all been buried in such thoughts of self-doubt.