Top Posts
‘Company’ to Hit the Road on North American...
Meet the Full Cast of ‘Shucked,’ Coming to...
Full Cast for ‘Parade’ Announced
Stephen McKinley Henderson Gives the Performance of His...
The McKittrick Hotel Announces the Return of ‘The...
Broadway Stars Honored with Academy Award Nominations
Taylor Trensch, Danny Wolohan, and More Join the...
A Gay Road Trip Comes to The Brick...
Maude Apatow of ‘Euphoria’ is the Next Audrey...
Tony Award Winners to Star in ‘Hercules’ at...
Home Beyond Broadway “Disaster!” Takes a Bite Out of Off-Broadway
Beyond BroadwayBuzzReviewsShow Folk

Broadway Blog editor Matthew Wexler risks it all at the Off-Broadway hit, Disaster! and catches up with co-creator Seth Rudetsky.

Shortly after Jaws was released and I was old enough to swim at the public pool, I quickly took on the role of that fateful swimmer chomped to bits in the opening scene. Much to my delight, several years later Piranha was released and I could succumb to a watery death all over again (that is, until the lifeguards became tired of my antics).

Clearly I wasn’t the only one obsessed with disaster movies. There was quite a string of them… Airport, The Towering Inferno, and the grandmother of them all — The Poseidon Adventure. Imagine all of them wrapped up into one gloriously ridiculous musical peppered with hits from the ’70s including “Feel So Good,” “Daybreak,” “Hot Stuff” and “Nadia’s Theme.” The list goes on and I wouldn’t dare reveal much more for fear of ruining their most unexpected interjections throughout the course of Disaster!, a new musical playing at St. Luke’s Theatre. The cast of “Disaster!”
(photo by Jeremy Daniel)

Written by longtime collaborators Seth Rudetsky and Jack Plotnick, Disaster! is one big guilty pleasure and holds nothing back. While it’s heavy on schtick, Rudetsky says the show was inspired by the great hits of the ’70s and a crazy idea: “What if we did every single disaster movie ever?  We wanted it to be a show that had characters that go on a journey. [It’s about] teaching people how to love – and by the end they realize how to love someone else.”

Rudetsky is no stranger to the artistic form of musical theater. Unlike many industry professionals who pursue careers onstage or behind the scenes, Rudetsky has built a ricochet career that has included playing piano for more than a dozen Broadway shows (he was a piano performance major at Oberlin Conservatory), radio host on Sirius XM, stand-up comedian, staff writer for The Rosie O’Donnell Show, published author and TV host. All of that (and then some) has been poured into Disaster!, in which he also appears.

Casting is half the battle and Rudetsky and team have assembled a collection of seasoned pros and new talent. “People know if they’re going to do something with me they know it’s going to be good. I’m obsessed with talent, not stars,” he admits. Longtime Broadway belter Mary Testa (whose role will be taken over by Annie Golden then Judy Gold) is one of many Rudetskians… a visit to his TV channel reveals candid conversations and exclusive concerts with the likes of Sutton Foster and Patti LuPone. Other stand-out performances in Disaster! include Jennifer Simard as Sister Mary and newcomer Charity Dawson as Levora.

Disaster! is almost too good to be true. When poised with the question of a possible transfer, Rudetsky, who is happy in the old-school St. Luke’s Theatre, says, “There’s lot of talk about everything. I like the proximity of everybody. It’s a little gem of a show. I’m loving it right now where it is.” But as history shows, “where it is” doesn’t last long for Rudestky, who simply just loves the theater and will undoubtedly be dipping his toe into something new before we know it. And if there are piranhas in the pool? Well, that’s OK, too.

Take a sneak peek — don’t say we didn’t warn you! 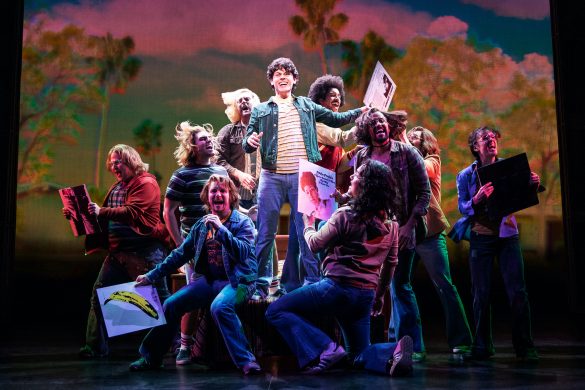