You’ll be happy to know that teen angst, in all its heightened and fleshy glory, is alive and well on Broadway in the stunning revival of Spring Awakening, playing at the Brooks Atkinson Theatre through January 24. This new production, originally conceived by The Forest of Arden Theatre Collective and Deaf West Theatre, is a wildly impactful and visceral production that goes straight to the heart and doesn’t let go.

German playwright Frank Wedekind’s play—a controversial exploration of sexual discovery and repression, first appeared onstage in 1906 and over the course of the last century has been repeatedly censored due to its sensitive subject matter. Steven Sater (book and lyrics) and Duncan Sheik (music) used the source material for a new musical that opened on Broadway in 2006, snagging nine Tony Awards. Nine years later, Spring Awakening is as potent as ever, thanks to a triumphant cast that includes deaf actors and their singing counterparts. The plot follows Wendla (Sandra Mae Frank, voice by Katie Boeck) as she begins to question the changes in her body. Her longtime friend Melchior (Austin P. McKenzie) slowly becomes an object of desire and the pair begin to explore their sexual identities, resulting in a conflicted encounter that many might constitute as rape.

Meanwhile, other local teens cope with their trials and tribulations: Moritz (Daniel N. Durant, voice by Alex Boniello) must face his father after being expelled from school; Martha (Treshelle Edmond, voice of Kathryn Gallagher) admits to being abused at home; Ilse (Krysta Rodriguez), somewhat of an outcast, runs away to join an artist colony; Hanschen (Andy Mientus) manipulates his sexuality to seduce Ernst (Joshua Castille, voice of Daniel David Stewart). Though the plotlines are clear, Sater’s book is more of a mosaic that offers different perspectives when examined through the trajectory of a single character or taking in the repressive society as a whole.

While the teens seem to be running the show, the production is blessed with a handful of “adult” actors that set the bar high and create enough dramatic tension to propel the plot forward, including Academy Award winner Marlee Matlin, Patrick Page, Camryn Manhein, and Daniel Marmion. It’s blissfully impossible to discern where director Michael Arden and choreographer Spencer Liff’s work begins and ends, for the results of their collaborative efforts are so visually stunning it may take your breath away. Sheik’s pop score pummels through the theater, with pinpointed falls of silence communicated through American Sign Language.

It is this sensory overload that makes Spring Awakening soar.

Anyone who has been around a gaggle of teens can attest to witnessing bodies on the verge of discovering themselves, gangly movement and general awkwardness. There is something almost anachronistic about the punctuated and deliberate “voice” of American Sign Language. These actors—by necessity—are keenly in touch with their bodies and the nuances of each specific gesture, and so magnify the stakes for the entire company.

Spring Awakening, as evident by the handful of teens waiting in tears by the stage door after the performance I saw, is palpable. 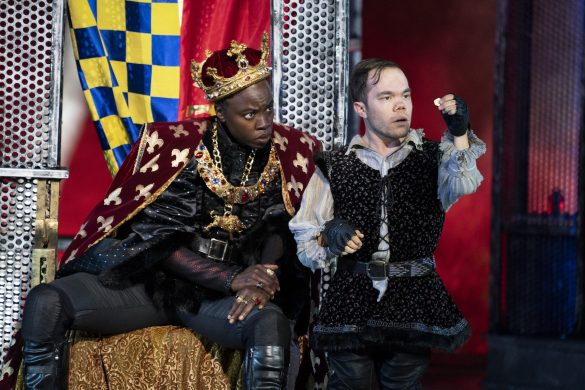