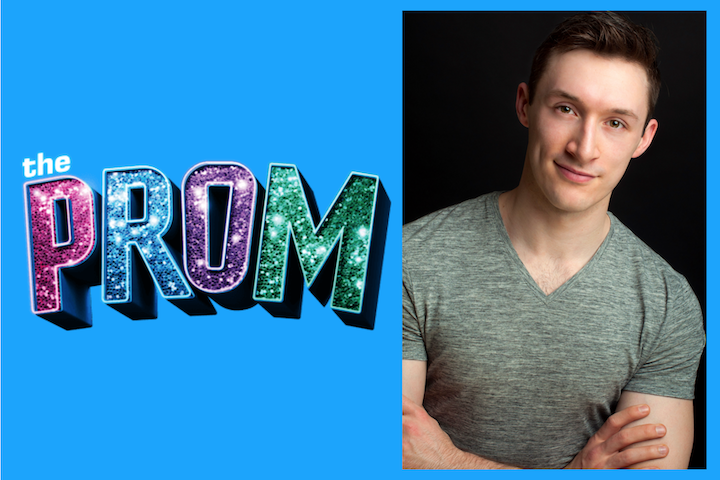 Looking for a Broadway dream date? The Prom has been nominated for seven Tony Awards (including Best Musical) and offers a charming story about a group of narcissistic actors who head to the Midwest to help a lesbian high schooler overcome her small-minded town. The multi-talented cast wows with high-energy production numbers (choreographed and directed by Casey Nicholaw), including this month’s Theater Buff, Drew Redington.

The Broadway Blog chatted with Drew about his audition experience, performing in The Prom, and some of his favorite spots around New York City and beyond.

What was your audition experience like for The Prom?
I joined The Prom last January when they did the second lab. Initially, I went to the Equity Chorus Call for the lab and had two more callbacks following. At my final callback, I danced and sang for the entire creative team then got a call a few hours later letting me know I got both the lab and the Broadway show.

The ensemble in The Prom plays a bunch of different characters. What’s a rundown of your track and do you have any lightening-speed quick changes?
Along with playing a few partygoers, I also play Kevin, a high school jock who is one of Emma’s bullies in the show. I have a song where I get to ask my girlfriend to the Prom, and it is fun to carry that storyline through the show. I only have one big quick change for the finale, and I probably change my clothes in 20 seconds, then have to rush back onstage.

What has been your favorite experience with the show so far?
My favorite experience would be working with the most genuine and down-to-earth cast I have ever met. This company is truly one of a kind, and I have never experienced one like it in my whole career. It is rare to find a cast so special. I love seeing them every day.

Who would be your ultimate Broadway star prom date and why?
Bernadette Peters. She is so sweet and kind, but I know we would shake up the dance floor.

If I weren’t a performer, I would be:
Forensic Scientist

The best post-show cocktail in New York City is at:
House of Brews (I love beer!)

After you’ve hit all the traditional sites of New York City, you should totally go to:
Walk the High Line! It’s a great way to see New York City.

If I could live anywhere else in the world it would be:
Chicago

My workout “secret” is:
One hour max, nothing less, nothing more.

When I’m looking for a date, nothing attracts me more than:
Someone with a great smile and someone who smells good.

My favorite website to visit that you may not have heard of is:
Blu Dot Furniture

People would be surprised to learn that I . . .
Unicycle

When I was 10, I wanted to be just like:
Any Broadway performer, third hoofer on the right to the leading man.

Ten years from now I’d like to be:
Polishing my EGOTs!