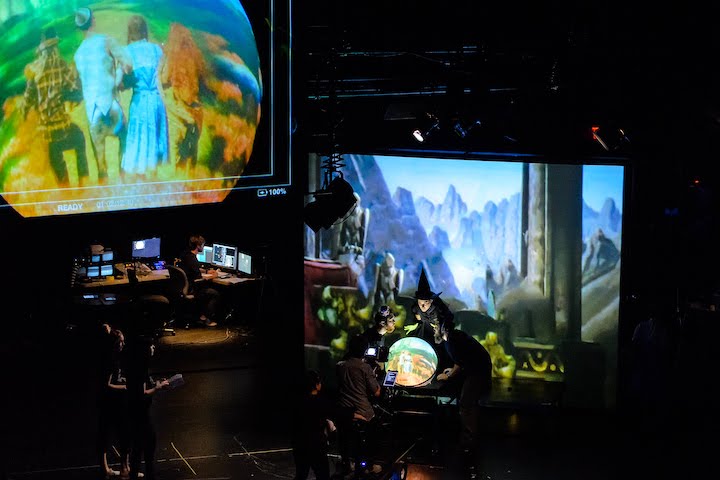 As the mobile phone has evolved from a communication device to appendage, its use has become a dreaded nuisance in the theatre. From the annoying ring at an inopportune time in a show to annoying texting audience members who deserve the full Patti LuPone treatment, cell phones have become the theatrical equivalent of a crying baby on a long flight.

So, it came as a shock when upon entering NYU’s Skirball Center last weekend, that house staff members not only gave out the theatre’s Wi-Fi log-in to patrons but instructed them to make sure their cellphone had enough juice to make it through the performance of Elements of Oz.

For the next two hours, colorful plastic plants grew, a twister touched down, flying monkeys swarmed overhead, and munchkins chattered – all by way of an augmented reality app created especially by The Builders Association specifically for this show. 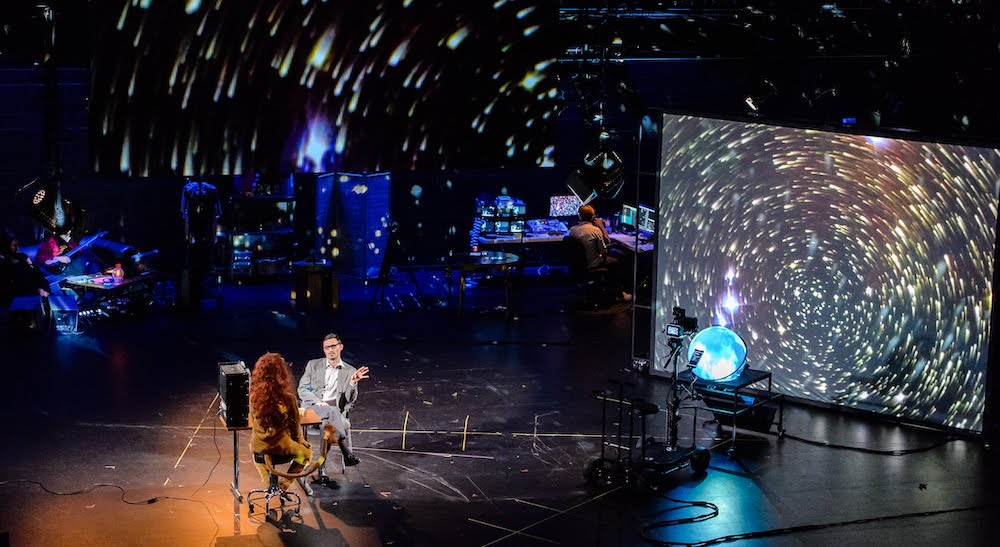 Created in 2015 by the OBIE Award-winning performance and media troupe, Elements of Oz is an exploration into the popular world created by author L. Frank Baum – specifically the classic 1939 MGM film version of The Wizard of Oz. Actress Moe Angelos (Five Lesbian Brothers) greets the audience, speaking into a selfie stick broadcast onto a screen above her. Acting as a tour guide of sorts for the evening, Angelos takes the audience on a trip over the proverbial rainbow to explain some of the history behind the film.

Angelos is aided by Sean Donovan (Cabin) and Hannah Heller (Strange Window), along with numerous YouTube testimonials from various Oz “experts” including one very flamboyant gay man who claims that the movie’s enduring LGBTQ appeal comes from the fact that it’s “about two women who are trying to kill each other over a pair of shoes.” 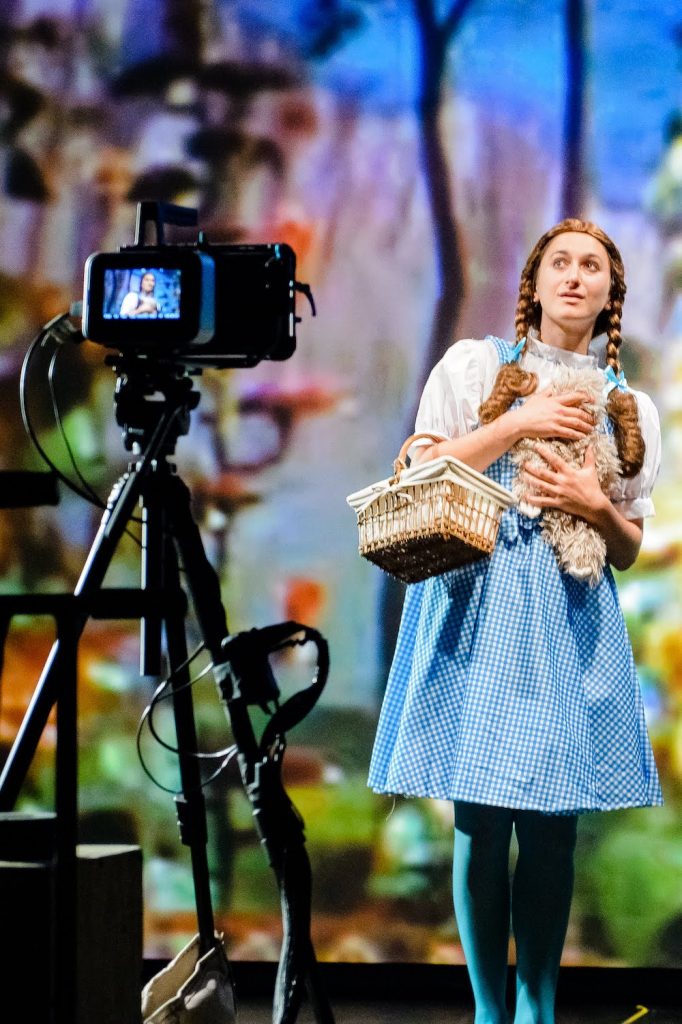 Throughout the performance, the three actors dive in and out of the iconic characters from the film. Each one (including the mustachioed Donovan) takes a turn wearing Dorothy’s blue gingham dress as they deconstruct, pre-construct, and reconstruct numerous classic scenes. The Builder’s Association team of technical wizards, in record time, splice the action together and we get to see the often-hilarious reconstructed scenes.

Like the winding yellow brick road itself, the show takes some odd but interesting turns. One theory that the Emerald City is really a metaphor for gilded age politics and wealth becomes abruptly punctuated by a recreation of an interview between Mike Wallace and a chain-smoking Ayn Rand. Similarly, later in the show, Satanic Verses author Salman Rushie (portrayed by Donovan) explains the worldwide phenomenon of the film to none other than the Cowardly Lion.

The evening is loaded with lots of insider tidbits. Safety standards were pretty lackadaisical on the set of the movie. So much so, that the emergency room at the Culver City Hospital was kept busy for months with injured flying monkeys and a severely burned Margaret Hamilton (who, ironically, was reportedly the only person who was kind to teenage Judy Garland during filming). If that wasn’t bad enough, it turns out that Dorothy’s house wasn’t the only deadly thing dropped on the soundstage. The snow the production used to wake Dorothy and the Cowardly Lion from their poppy-induced slumber was made from 100 percent pure asbestos.

Elements of Oz reminds audiences, among other things, that for better or worse, there’s no place like home, gadgets and all.

ELEMENTS OF OZ (5 minute Trailer, 2016) from The Builders Association on Vimeo.

NYU Skirball will continue to present audacious and visionary national and international performing arts events in the coming year. The arts center’s Winter/Spring 2020 season opens on Thursday, January 23 with a two-week run of the Wooster Group’s acclaimed A PINK CHAIR (In Place of a Fake Antique), directed by Elizabeth LeCompte, and concludes with the New York premiere of the Requiem Pour L, a joyful music/dance meditation on life and death from Belgium’s les ballets C de la B.