Top Posts
Stephen McKinley Henderson Gives the Performance of His...
The McKittrick Hotel Announces the Return of ‘The...
Broadway Stars Honored with Academy Award Nominations
Taylor Trensch, Danny Wolohan, and More Join the...
A Gay Road Trip Comes to The Brick...
Maude Apatow of ‘Euphoria’ is the Next Audrey...
Tony Award Winners to Star in ‘Hercules’ at...
‘New York, New York’ Finds its Two Leads
Full Casting Announced for Oscar Isaac-Led ‘The Sign...
Disco Pop Musical ‘Here Lives Love’ to Bow...
Home Buzz Chuckles From the Past: ‘Enter Laughing’
Buzz 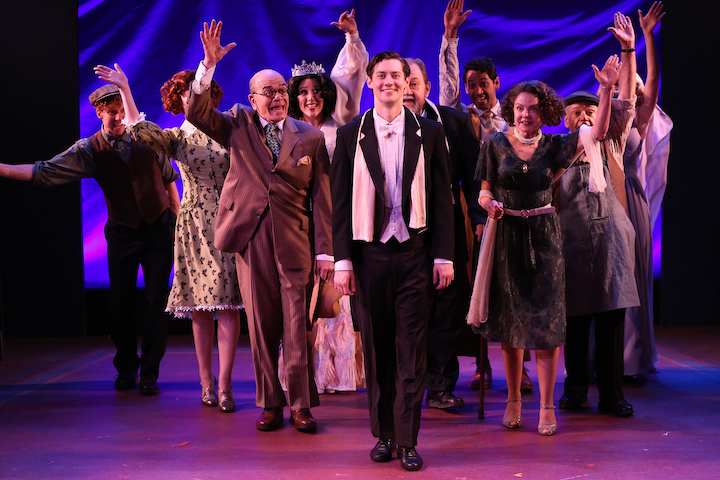 Enter Laughing: The Musical, which debuted under Stuart Ross’s sprightly direction at Off-Broadway’s York Theatre in 2008 to very warm reviews, has returned to the York, with Ross again at the helm. It’s a generally diverting (if slightly problematic) show, whose roots are in Enter Laughing, a novel by comic genius Carl Reiner that was dramatized by Joseph Stein (Fiddler on the Roof) into a hit 1963 comedy of the same name. 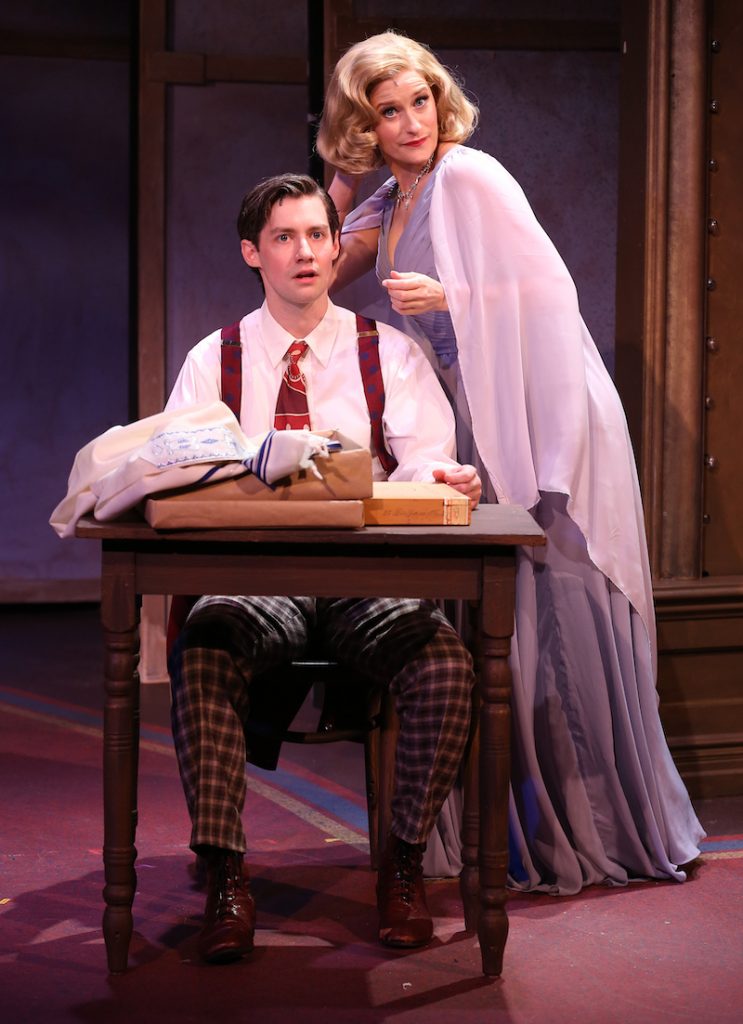 It, in turn, was musicalized in 1976 as So Long, 174th Street, during the same season that birthed A Chorus Line and Chicago. The result was a 16-performance flop, with a book by Stein and music and lyrics by Stan Daniels; its 2008 revision, retitled, surprised everyone by how funny it was.

Enter Laughing, set in the late 1930s, is about David Kolowitz (Chris Dwan), a talentless teen from the Bronx, who wants so badly to be an actor that he rejects his hardworking parents’ insistence that he become a pharmacist. The 29-year-old Alan Arkin was hilarious as the original David, 44-year-old Robert Morse was miscast in 1976, Josh Grisetti was a crowd pleaser in 2008, but Dwan, appealing and musically talented, is a bit shy in the natural clown department; despite his hard work, he’s not especially convincing as a Depression-era Jewish kid. Fortunately, he’s supported by an ensemble that nails all the other roles.

David, a cute schnook in a James Monroe High School jacket, works as a machinist for Mr. Forman (Ray DeMattis). He’s got a buddy, Marvin (Joe Veale), who supports his ambitions; a loyal girlfriend, Wanda (Allie Trimm), who has to contend with his roving eye; the sexy, Billie Dawn-like Miss B (Dana Costello), a secretary who catches that eye; and, of course, those pushy parents, Emma (Alison Fraser, Squeamish) and Morris (Robert Picardo). Wanda’s jealousy is further aroused by Angela Marlowe (Farrah Alvin), the seductive actress-daughter of Harrison Marlowe (David Schramm), the egregiously hammy actor-director and booze-hound who casts the hopeless David because of Angela’s interest in him. 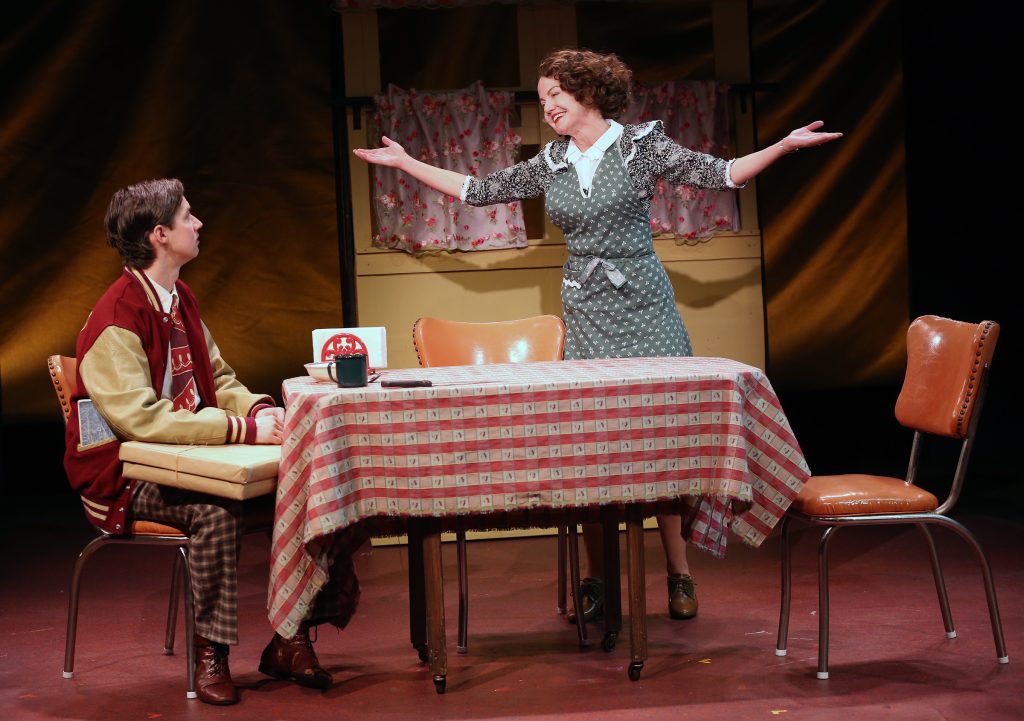 David’s naivete inspires laughs, but his ignorance needs a natural comedian to make it seem plausible. It’s a struggle believing that someone with acting aspirations—even one whose sole accomplishment is an awful impression of Ronald Colman—wouldn’t know the difference between stage directions and dialogue (as per the title: “enter laughing”), or what a “cue” is. Such cuelessness (I know) helps push the material over the top, especially when the play being rehearsed is performed.

In that scene, David enters, wearing a clownishly oversized tuxedo, sees the audience, is struck dumb, and incites a series of mishaps of the kind much more risibly enshrined in The Play That Goes Wrong. Ultimately, David’s romantic, family, and career aspirations are happily resolved.

In contrast to what I’d heard, I found the book weaker than the score. Funny as it often is, the script is simply too silly and overstated, while each of the 15 songs is musically catchy, with cleverly entertaining lyrics. If I had to cite just two, one would be Emma’s “My Son, the Druggist,” in which she lays a Jewish mother’s giant guilt trip on David. The other is “The Butler’s Song,” a risqué patter routine in which a fantasy butler—memorably limned by David Schramm—tells Greta Garbo how long she’ll have to wait before “movie star” David has time to sleep with her. A sample:

Enter Laughing: The Musical is a pleasantly old-fashioned, even nostalgic, musical farce, whose modest book carries the weight of its stereotypical characters, period references, romantic tsuris, and laugh-worthy lyrics. Whether or not you enter or leave laughing, there’s enough comic material here to get your yocks off in between.