Top Posts
‘Company’ to Hit the Road on North American...
Meet the Full Cast of ‘Shucked,’ Coming to...
Full Cast for ‘Parade’ Announced
Stephen McKinley Henderson Gives the Performance of His...
The McKittrick Hotel Announces the Return of ‘The...
Broadway Stars Honored with Academy Award Nominations
Taylor Trensch, Danny Wolohan, and More Join the...
A Gay Road Trip Comes to The Brick...
Maude Apatow of ‘Euphoria’ is the Next Audrey...
Tony Award Winners to Star in ‘Hercules’ at...
Home Beyond Broadway Culture Meets Camp: Les Ballets Trockadero De Monte Carlo at the Joyce
Beyond BroadwayReviews 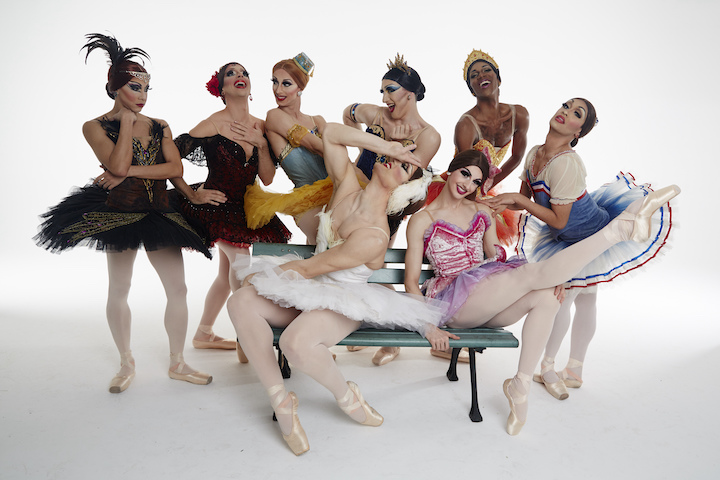 If you like your culture with a bit of camp, the world-famous, all-male ballet troupe Les Ballets Trockadero De Monte Carlo brings its considerable dance skills and ample slapstick humor to The Joyce Theater for a three-week run that’ll stuff your stockings with holiday cheer.

Known colloquially as “The Trocks,” the classically trained troupe observes balletic tropes while turning gender roles on their head. The male dancers perform all the roles, from jaunty prince to timid maiden, complete with tutus and pointe shoes. It’s nice to know there’s a place for genderfluid little boys to realize their prima ballerina dreams.

The show run is divided into two programs, with Program A running December 14–19 and Program B running December 21–26, followed by alternating programs December 28–January 2, 2022. Program A features Swan Lake Act II, the New York premiere of Nightcrawlers, and Walpurgisnacht, plus a pas de deux. Program B is advertised as ChopEniana, Le Grand Pas de Quatre, Majisimas, and a premiere pas de deux.

But that doesn’t mean what you see is always what you get. We arrived to discover that the pas de deux was now a pas de trois and that Nightcrawlers would be followed by the summary execution of the swan.

So, the dancers took the stage to act out the story of Odette (Nadia Doumiafeyva), a beautiful princess transformed into a swan by evil wizard Von Rothbart (Jacques d’Aniels, aka Joshua Thake). Prince Siegfried (Boris Mudko) is hunting with his confidante Benno (Tino Xirau-Lopez) when he encounters the Queen of the Swans and her entourage, transformed by the wizard.

The Prince tries to catch the Queen, but she shimmies by in a series of passes that unfolds like an old Harold Lloyd silent movie, all near-misses and slapstick. Around her, swans of all shapes and sizes (including some with hairy armpits) spring into formation to attack the advancing archer Benno, to great comic relief.

Exhibiting some lovely pointe work, the Queen swans onstage among a glissando and executes a perfect set of jetés, arabesque spins and dips as the other swans hop backward doing temps levé. They finish with the Prince holding the Queen around the waist and spinning her as she does incredibly complicated fouettes. She looks like the quintessential music box ballerina (with a slight tuck) and ends the show with a series of six perfect chaîné spins.

In the end, despite the Prince’s ministrations, the wizard wins. This was not an unusual theme when Pyotr Ilyich Tchaikovsky first wrote this ballet in 1877; nor was the idea in Russian folklore of mortals transformed into birds, and vice versa.

Periodically, the dancers pretend the male lead is dropping the ballerina because she’s too heavy. It’s initially a funny sight gag, but one that grows old fast, especially as you realize the undeniable skill of these dancers would never allow that to transpire. 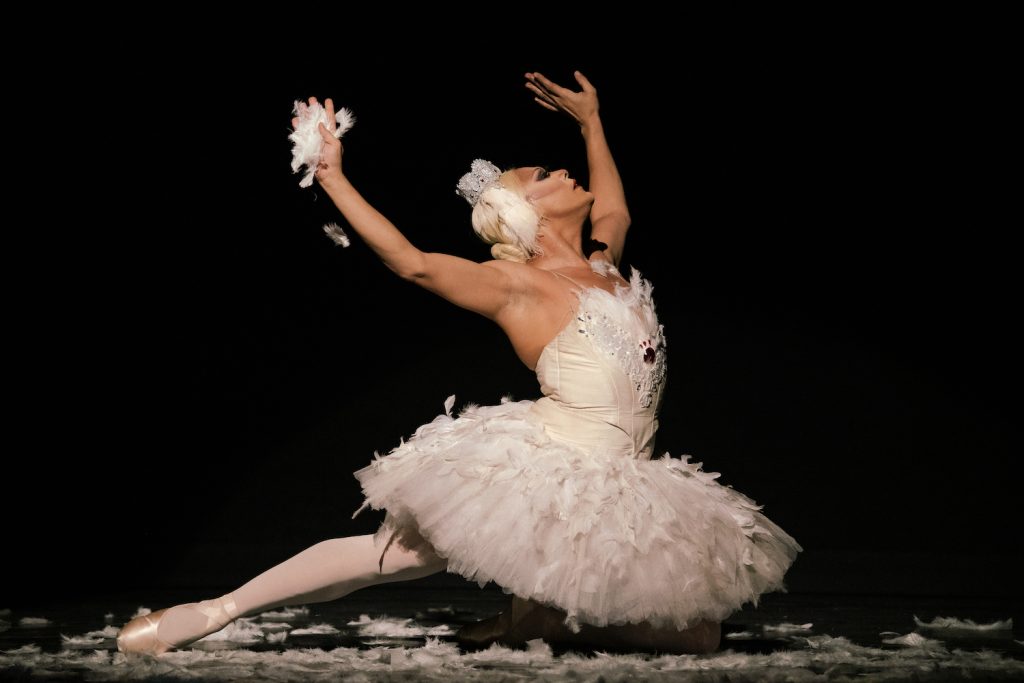 After a short intermission, the dancers return with a pas de trois—another sight gag featuring two super-tall ballerinas (Helen Highwaters and Eugenia Repelski) flanked by one short male danseur (Timur Legupski). It’s an interesting juxtaposition, to be sure, but it’s hard for a fellow to look butch with such tall dates. Nevertheless, he does his best to keep up with the dual ballerinas spinning on either side of him as they do a series of impressive leaps and complicated pointe work. At the end of the dance, rather than be lifted, the two tall ballerinas turn tradition on its head by lifting up the male dancer between them to tremendous applause.

The New York premiere of the Jerome Robbins In the Night parody Nightcrawlers follows, set to nocturns by Frédéric Chopin. Three dancers in tuxes and three in colorful silk frocks waltz and lift each other across the stage. One dancer makes a show of literally tossing his feminine counterparts into the wings, lest they steal his spotlight.

The dancers in tuxes take turns riding each other horseback-style across the stage, with the rider ‘whipping’ the horse. The dancer in green does a series of impressive across-the-back rolls, and then all three couples do a final series of spins and lifts, ending on bended knee.

The second act closes with that promised execution of the swan. The troupe’s most outrageous dancer, the sturdy Olga Supphozova, takes the spotlight en pointe, shedding copious amounts of feathers. She spins and jumps, dancing beautifully but also camping it up for applause until her final, dramatic death drop. Those ballroom queens have nothing on her.

Amid the serious moves, the dancers pop Bob Fosse jazz hands. Pan (Boris Dumbkof), clad in beautiful yellow and brown velvet pants, vies for the attention of Bacchante, and pawing turns into pattycake. The Nymphs, Fauns, and Maidens do some elegant dancing among all the clawing and pawing and finish the act with some complicated floor moves. The entire troupe caps the evening with a high-kicking encore of “New York, New York.”

Between the excellent dancing, the beautiful costumes, and the screwball comedy stylings, The Trocks show the best of balletic dancing while letting a little air out of a medium most Americans still find stuffy and inaccessible. Grab tickets now for a perfect holiday night out.

And do yourself a favor while you’re waiting for the show to begin: Take a few minutes to read the hilarious bios contained within the Who’s Who in the Company section. You’ll laugh at their names and howl over their backstories. After all, isn’t going out on the town all about having a good time?

Winnie McCroy is a longtime arts & entertainment writer who lives in Brooklyn with her wife and her highly spirited Doberman puppy, Fred. For more of her reviews, visit winniemccroy.com.