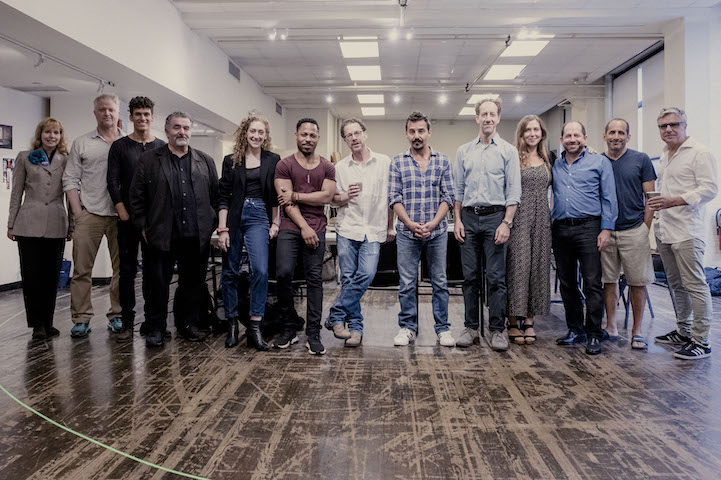 Rehearsals for Ethan Coen’s ‘A Play Is a Poem.’ (Photo: Benedict Evans)

The cast is set and rehearsals have begun for the world premiere of Ethan Coen’s A Play Is a Poem at Center Theatre Group/Mark Taper Forum. Directed by Neil Pepe and presented in association with Atlantic Theater Company, A Play Is a Poem begins performances on September 11 and continues through October 13. The opening is set for September 21.

A Play Is a Poem is a new collection of five one-acts by Ethan Coen set in the hillbilly hollows of Appalachia, the executive suites of Hollywood, a New York tenement apartment, the smoke-filled office of a Los Angeles private eye and a magnolia-scented gazebo in Natchez, Mississippi. Each place holds a different story — together, they offer an eccentric look at life across America that only Ethan Coen could deliver.

Ethan Coen has written three previous evenings of one-acts, Happy Hour, Almost an Evening and Offices, all three directed by Neil Pepe. His full-length play Women or Nothing was directed by David Cromer and premiered at Atlantic Theater Company. He contributed a play to Relatively Speaking, a Broadway trio of one-acts whose other contributors were Woody Allen and Elaine May. Coen has written a collection of stories, Gates of Eden, and two collections of poems, The Drunken Driver Has the Right of Way and The Day the World Ends. Coen has also written, produced and directed films with his brother Joel for 35 years.

Pepe’s recent directing credits include the New York premiere of Simon Stephens’ On the Shore of the Wide World, and the world premieres of George Brant’s Marie and Rosetta, Kenneth Lonergan’s Hold On To Me Darling and David Mamet’s The Penitent, all at New York City’s Atlantic Theater Company. Broadway credits include the musical, Hands on a Hardbody the acclaimed revival of David Mamet’s Speed-the-Plow and A Life in the Theatre.