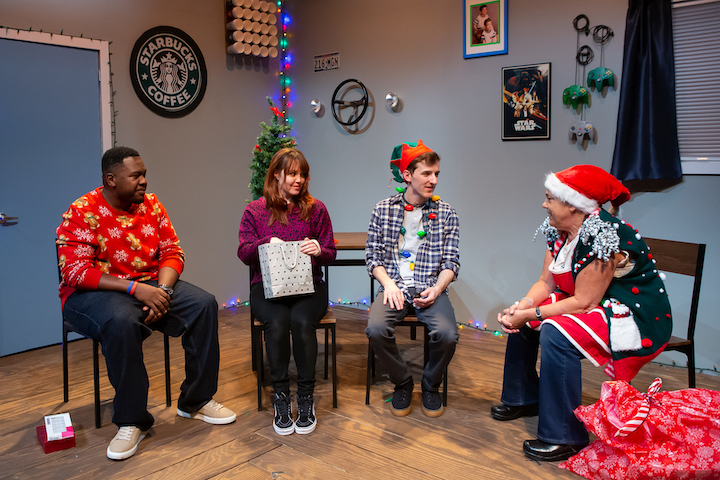 The title of Stephen Brown’s domestic dramedy, Everything Is Super Great, now at 59E59 Theaters, doesn’t translate into a super great play, but it’s still a pretty good one, funny and poignant, very well acted, with laughs and tears enough to pleasantly fill its 95 minutes.

Everything Is Super Great, presented by the New Light Theater Project in association with Stable Cable Lab Co., is set in Texas (which, surprisingly, is of no particular atmospheric importance), and looks at four lonely people coping with loss.

Tommy (Will Sarratt) is a depressed, 19-year-old computer geek who handles his issues by videotaping messages to his missing older brother, whose absence has left a hole in Tommy’s heart. Tommy has a history of angrily acting out, like setting a fire at the Applebee’s where he worked.

His mother, Anne (Marcia DeBonis), a Walmart employee who loves gifting people with pop-tarts (she has a toasting technique pop-tartists may wish to try), contends with her older son’s disappearance while handling Tommy’s fury by smothering him with concern. The more he shrugs off her ministrations, she more she ministers them. Naturally, that succeeds only in irritating him more. Against his will, she arranges for him to seek therapy with the grateful Dave (Xaviar Rodney), who once worked with her at Walmart’s, where she helped get him promoted from cashier to the electronics department.

Tommy is Dave’s first patient and soon discovers to his dismay from Dave’s unusual methods that he’s an art therapist with an MFA, whose website testimonials are all phony.

Tommy: They give out MFA’s in anger management?

Dave: Sort of. It’s a cool little hybrid form I created at school called ‘Anger Management Through the Arts.’

Stunned, Tommy inquires if that means he cures people by having them paint, to which Dave answers, hesitantly, “Not exactly…We also sculpt and create collages.” 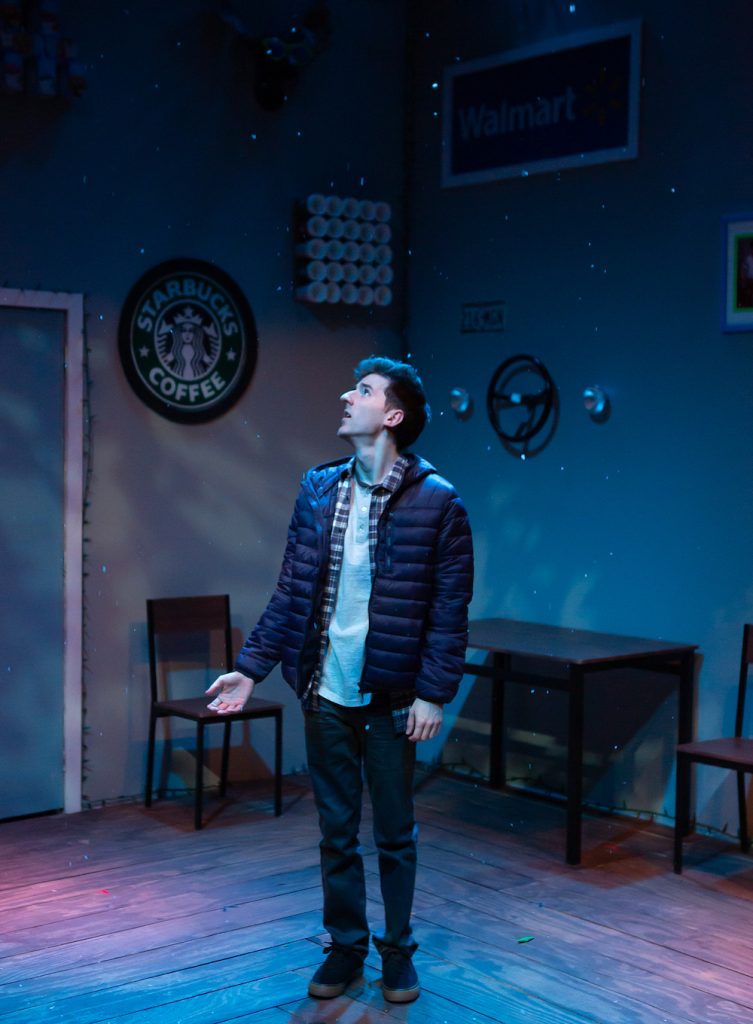 Will Sarratt in ‘Every Thing Is Super Great.’ (Photo: Hunter Canning)

Cheerfully avuncular at first, Dave soon reveals not only that he has his own anxiety disorder but that he’s fuming over his girlfriend’s having walked out on him, her whereabouts unknown. Tommy’s hacking skills come to the rescue, with amusing results.

Placing the action during the holiday season turns the heat up on the heartwarming struggle as these four to come to terms with the hurt of losing someone. Each troubled soul also manages to bring comfort to one or more others.

Brian Dudkiewicz’s simple set, which consists of two bland walls and a door and outlined in Christmas lights, heightens the good vibes on Theater C’s tiny stage. Although far from eye-catching, it denotes the episodic script’s interiors and exteriors with smooth efficiency by having lighting designer Elaine Wong spotlight various artifacts: Starbucks and Walmart signs, headlights and a steering wheel, a house address, and so on.

Director Sarah Norris elicits strong performances from the ensemble. Sarratt’s Tommy deploys just the right boyish vocal and physical mannerisms to express teenage angst and insecurity. DeBonis’s Anne is a believable combination of maternal concern, sentimentality, and quirky individuality. Rodney’s Dave has a boisterously humorous sincerity that belies his questionable methods. And Anderson’s Alice convincingly captures the pain of an overburdened young woman dealing with problems beyond her ken.

While all the characters in Everything Is Super Great suffer aching loss, they also learn, as the song goes, that people needing people are the luckiest people in the world.