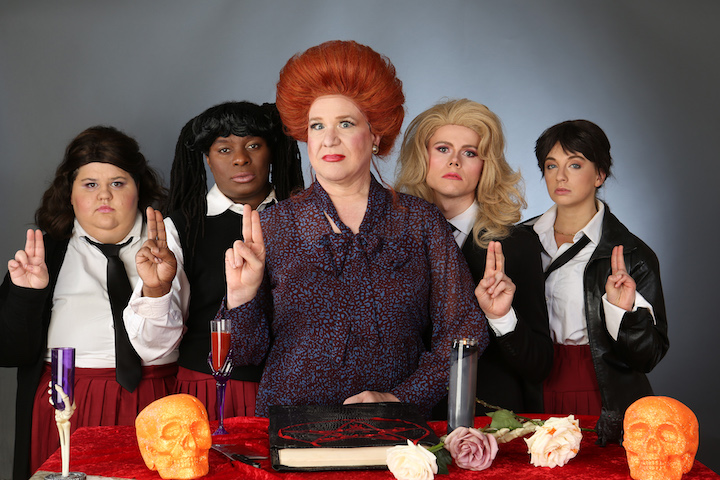 Everyone of a certain age remembers The Facts of Life, Norman Lear’s hit comedy about four boarding-school teens and their wacky house mother, which is still one of the most successful sitcoms featuring an all-female lead cast in television history. But what if the girls of Eastland Academy harbored a spooky secret that led to several classmates mysteriously disappearing? Hell in a Handbag Productions asks this question with its queer musical parody, The Facts of Life – Satan’s School for Girls, and the answer is: much hilarity.

When her kid sister Molly (Katy Campbell) stops returning phone calls, ace reporter Claudia (David Cerda) journeys to Eastland Academy and poses as a student. Her housemates embrace their new friend but allude to an “initiation” spearheaded by Mrs. Edna Garrett (Ed Jones) that Claudia must pass to be a real “Eastland girl.” As Halloween draws nigh and Claudia finds herself ensconced in boarding school life, will she unlock the satanic secret of Mrs. Garrett’s house or die trying?

Hell in a Handbag is known for loving homage to queer classics and has parodied everything from The Poseidon Adventure to The Bad Seed. The company’s episodic Golden Girls shows, once a runaway hit, now recur at least two to three times a year. However, Handbag productions can be hit or miss, sometimes sacrificing strong character-based humor in favor of cramming in specific plots and pop culture references. With The Facts of Life, writer and composer Cerda (Handbag Artistic Director and co-founder) strikes the perfect balance of witty parody and entertaining camp. 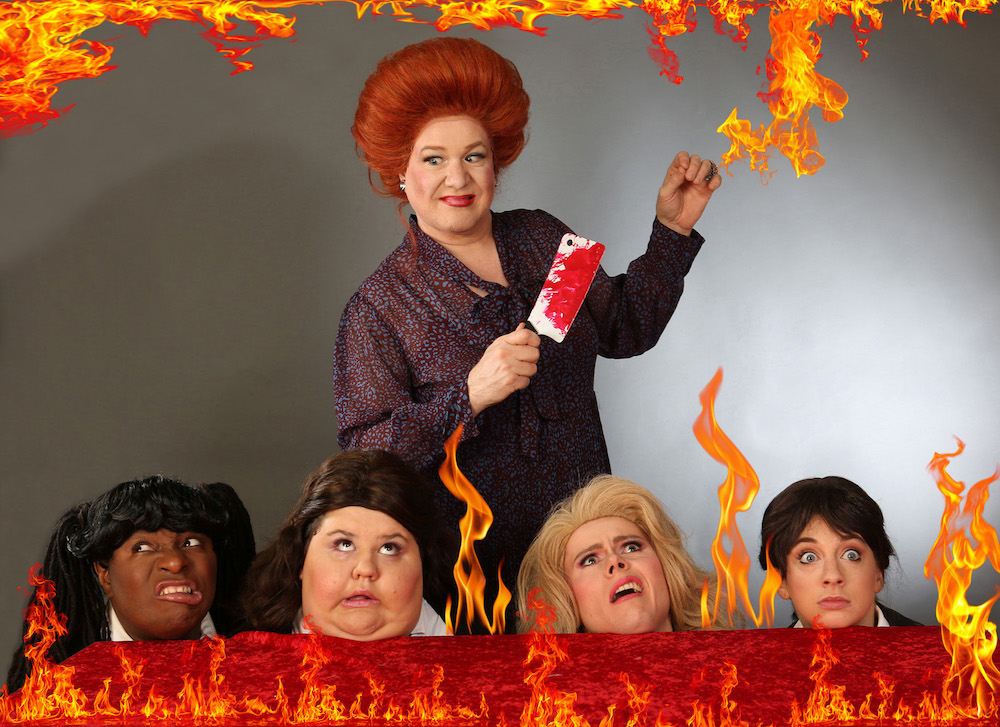 Though most of its songs are forgettable, the show is 95 minutes of pure enjoyment, both for those who grew up with Blair, Tootie, Jo, and Natalie, and those who were babies during the sitcom’s heyday. (Many funny Easter eggs are present for the former, such as Tootie’s ubiquitous roller skates — used in the sitcom’s first season to make actress Kim Fields look taller — and an 11 o’clock cameo appearance by a Diff’rent Strokes protagonist.) Mary’s Attic, the bar and performance space located above Hamburger Mary’s in Andersonville, is the ideal location for The Facts of Life. Guests can grab food and drinks during intermission and return to even more laughs about bloodlust, teen horniness and Claudia’s attempts to pass as a 16-year-old when she is, in fact, (much) older.

The cast handles the style of parody like pros. Handbag company member Jones is perhaps best known for his delightfully daffy Rose Nyland in the Golden Girls shows. His Edna Garrett does not disappoint, sporting a towering red bouffant and Charlotte Rae’s signature vocal tremor that’s present even during the darkest of Eastland rituals. Graham Heacock’s sarcastic diva Blair is spot-on, as is Alexa Castelvecchi’s tough-as-nails scholarship student Jo (in one of the show’s funniest moments, a character gleefully informs Claudia, “Jo’s a tomboy, which is the 80s sitcom word for lesbian!”). As Tootie, company member Robert Williams gleefully vacillates between charmingly naïve schoolgirl and grizzled cokehead, and recent Columbia College Chicago graduate Brenna L. Watkins channels bubbly Natalie in a way that would make Mindy Cohn proud.

The Facts of Life – Satan’s School for Girls knows exactly what it is: a confection of fake-blood-drenched silliness just in time for Halloween season. By capturing the original characters and adding a healthy dose of camp, Handbag’s latest production does just what it’s supposed to: delight.