Top Posts
Broadway Review: ‘Skeleton Crew’
‘B is for Broadway’ Feb 1 Release to...
Broadway Photographer Matthew Murphy Heads Underground to Help...
Keala Settle Heads to West End to Join...
‘The Kite Runner’ Heads to Broadway for Limited...
First Look at Audible’s ‘Long Day’s Journey Into...
Robert Cuccioli Stars in ‘A Touch of the...
Tim Rice Teases that ‘Chess’ May Come to...
‘Girl From the North Country’ Announces Closing, Sort...
NYC Broadway Week 2-For-1 Tickets Now on Sale
Home Beyond Broadway In ‘Fear,’ the pursuit of truth falls short
Beyond BroadwayReviews 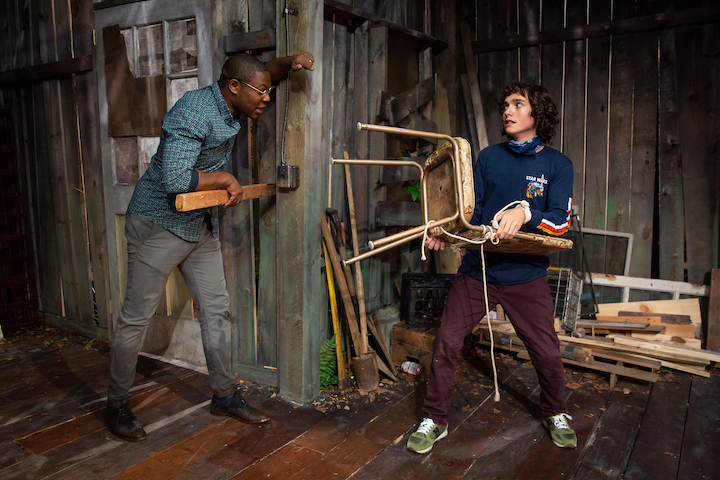 The end of October is about as good a time as any to produce a would-be chiller titled Fear, especially in a neighborhood home to the annual Village Halloween Parade. And it definitely was chilly inside the sparsely populated Lortel Theatre earlier this week, but not because of anything happening onstage in this overwrought three-hander in the tradition of Extremities and Death and the Maiden, with a thematic nod to the 2013 movie, Prisoners.

Matt Williams’s play about vigilante justice, thuddingly directed by Tea Alagić, uses the formula of two characters interrogating and mistreating a third for something the latter may or may not have done. It takes place in July in an expansive, shabby, abandoned toolshed (designed with naturalistic detail by Andrew Boyce, and carefully lit by D.M. Wood) in a forest near Princeton, New Jersey.

Phil, a middle-aged plumber — (Enrico Colantoni, TV’s “Just Shoot Me”) overdoing the full-court press treatment of working-class accent and attitude — uses a chokehold to apprehend baby-faced, 15-year-old Jamie (a quite good Alexander Garfin). He ties him to a chair, convinced the boy is guilty of foul play with a missing eight-year-old girl. Stumbling into the shed is Ethan, a tenured, full professor who teaches Shakespeare at Princeton. 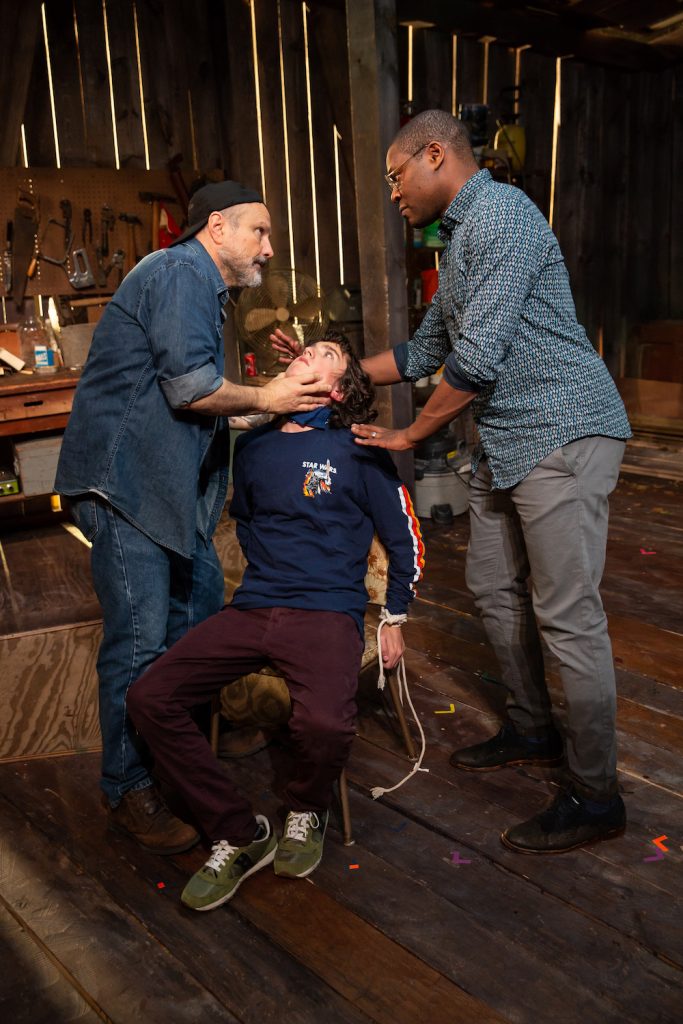 With Ethan played in stereotypically professorial mode by British actor Obi Abili (Irish Rep’s The Emperor Jones), in contrast to Colantoni’s portrayal of Phil as a loud, profane, average Joe, the play is as much a scenery-chewing competition as it is a suspenser. The central conflict is between Phil insisting on getting a confession while Ethan objects to his unlawful actions amid a search and rescue operation.

“Average Joe” is too easy a description for Phil, who, for all his aggressive verbal and physical machismo, is as verbally dexterous as his academic opposite. Comparing himself to Caliban and Ethan to Prospero, he even tosses Shakespearean references around, declaring, “Two semesters. Sacred Heart High School. I can talk about The Tempest. Or we can discuss the hellhound motif in Richard the Third if you’d like.”

Williams undercuts conventional class attitudes (further heightened by this production’s casting of a black actor as Ethan). Still, he’s unable to convincingly make his case, partly due to clumsy exposition and forced dialogue. Ethan sometimes expresses himself as if he were writing an essay: “When it comes to religion, I am inclined to agree with Diderot: ‘Man will never be free until the last king is strangled with the entrails of the last priest.’” And, would the Shakespeare-citing Phil, when he learns that Jamie is creating a graphic novel, keep calling it a “cartoon book”?

The Shakespearean issue is only one of the egregious contrivances in Fear, which assumes, for example, that only Phil’s cellphone can get service. Whenever his ringtone, playing “Superstition” (Jane Shaw did the sound design), interrupts, he steps aside for innocuous family business, allowing Ethan a chance to talk to Jamie. But when Ethan wants to call the cops, his own phone won’t work, cueing a laugh about AT&T.

Fear runs little more than an hour (despite notices that it’s 80 minutes.) When Phil isn’t drilling Jamie, our time is taken up with his nosy, neighbor-from-hell nastiness toward Ethan; his plan to waterboard Jamie (even though there’s just one bottle of water present); his descriptions of Jamie’s suspicious behavior (the lad may not be as angelic as he seems); and his concern with a horrible deed done to a neighbor’s cat.

As the drama veers toward its climax, twists and turns designed to shock appear, making us—if we’re still paying attention—question the nature of truth. The truth is, I’m afraid, that they come too late to save Fear from itself.