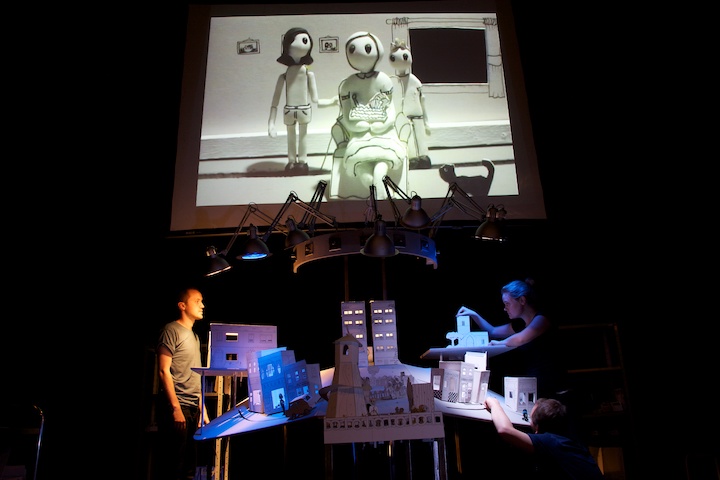 If you find yourself in the vicinity of E. 59th Street with a little time on your hands, you’ll need only 55 minutes to take in the expertly done, if dramatically thin Feral at 59E59 Theaters. This small-scale, multimedia, puppetry presentation, created by the Edinburgh-based Tortoise in a Nutshell, in co-production with Cumbernauld Theatre, was a 2013 hit in its native city before it began touring internationally.

Upstage center is a very large, slanted, drafting table, over which is a device holding half-a-dozen, long-armed, jointed desk lamps. As arranged by designer Amelia Bird, two small tables with technical consoles are at the sides, and a third table is upstage right. A projection screen hovers above the drafting table.

Throughout, Jim Harbourne, the composer and sound designer, controls what we hear from one of the side tables: this includes his own rhythmically infectious, emotionally varied music, a wide array of sound effects, and even occasional snatches of dialogue. Meanwhile, a man seated at the drafting table, his back to us, begins drawing childish, stick figure-like pictures of himself (Joe), his sister, Dawn, and his mum.

Everything he draws, as well as what ensues around him, is recorded by the small video cameras of other performers, all of it simultaneously projected on the screen. Gradually, a narrative evolves as the artist and other members of the five-person group bring his drawings to life. This involves filling the drafting table’s expanse with miniature puppets (even smaller than Lego-sized ones), and tiny, white, cardboard buildings, cars, and so on, including a tiny amusement pier jutting toward the audience.

This Lilliputian, cardboard city’s minuscule citizens are moved about by the perfectly coordinated puppetry team (Alex Bird, Arran Howie, Matthew Leonard, and director Ross McKay). Boats sail, birds cry, buses drive, animals play, people shop, kids visit the pier’s “Ghost House” and photo booth, Punch smacks Judy, and so on. We even see into the rooms in the multistoried buildings, where people go about their daily routines, like taking baths. 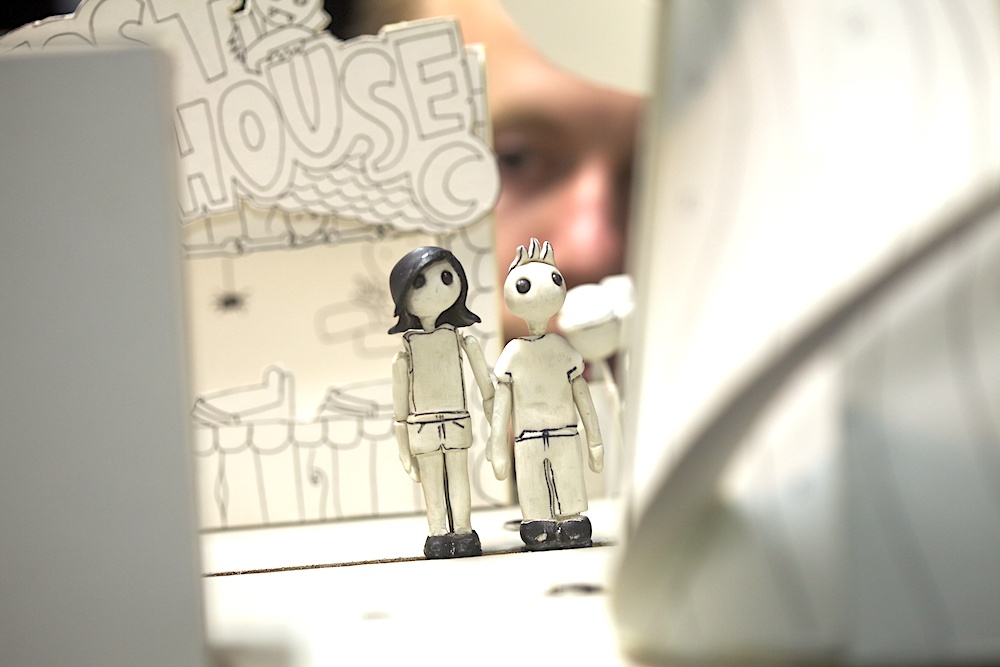 Puppets of the chief characters—their soft cloth faces weirdly featureless, except for their hair and bead-like eyes—mingle with cutouts of other people as well as small animals and birds to tell the tragic story of a tranquil seaside town. The central event is the decision of the city’s leaders to boost the local economy and create more jobs by rebuilding the seafront and converting the old pier into a “Supercade.”

Young Joe, whose crude yet perceptive, scrapbook drawings convey his strong emotions, often in color and, sometimes, with images of violent anger, is extremely excited by the Supercade. He’s doomed to be disappointed when it fails to mirror his dream of having something to do with superheroes.

Eventually, the Supercade turns into a super calamity, with politically scandalous (I caught the word “bribery”) implications, and we watch the charming town gradually become apocalyptically degraded, its buildings crumbling or graffiti-stained, its businesses closed, and the end days prophesied. Finally, the unemployed citizenry turns into a mob of feral thugs and perverts clashing with the riot gear-equipped police as the space crackles with the sound of the burning Supercade. 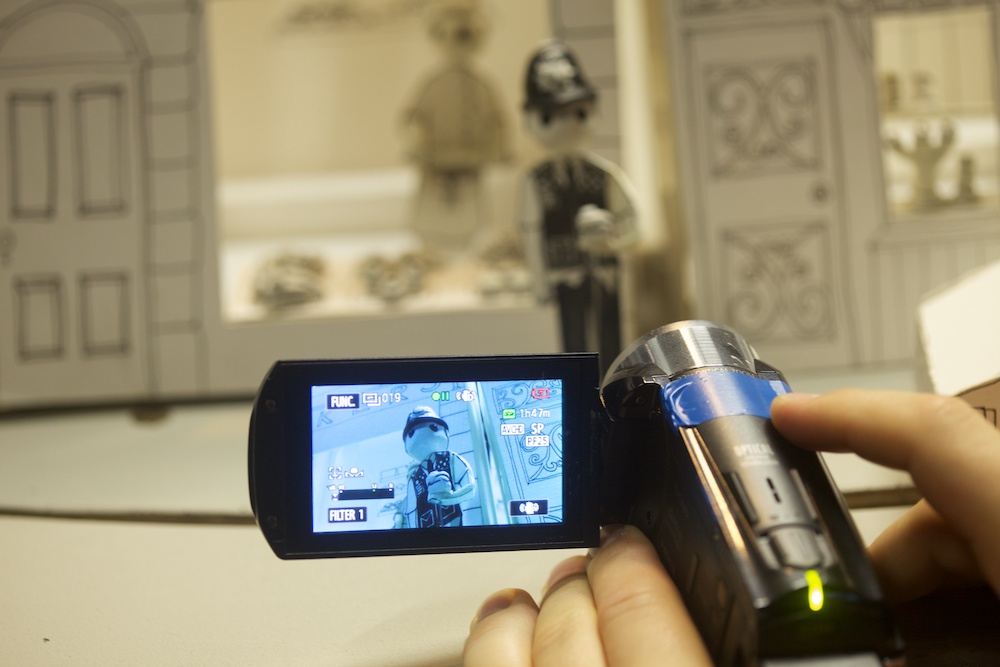 An air of primitive technique masks the great sophistication of the town’s remarkably detailed features. We can read the microscopic written signs in the close-ups made possible by the editing going on as the cameras cut from close-ups to pans to zooms to tracking shots. We simultaneously observe the puppeteers manipulating the desk lamps to create a panoply of expertly executed lighting effects designed by Simon Wilkinson.

Other than Joe’s loss of boyhood innocence as his town turns from idyllic residence to dystopian disaster, the work’s thematic points are never clearly expressed. If the intent is for us to extrapolate the idea that this imaginary town’s misadventure with big business “improvements” is intended as a universal, it doesn’t work.

But for anyone interested in puppetry done as devised theatre, and less than an hour to spare, Feral is definitely worth a look-see.