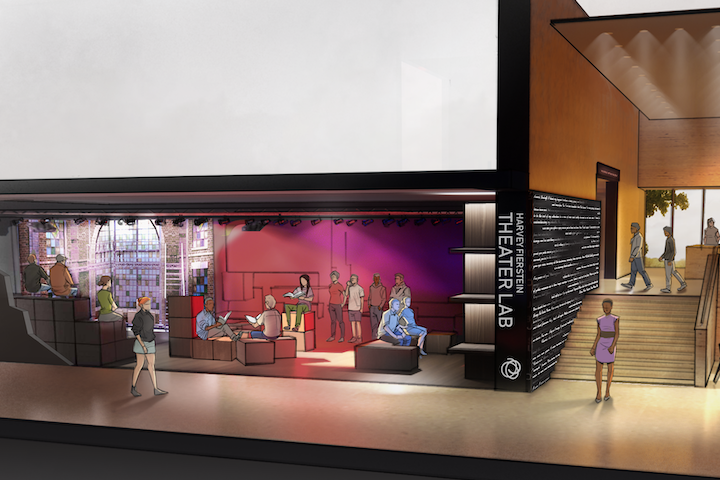 A rendering of The Harvey Fierstein Theatre Lab. (Photo: LAB at Rockwell Group)

David Rockwell said, “We are honored to be able to create this space for exploration, innovation, and imagination. Harvey’s vision of creating a new home for the next generation of theater artists is a vital part the Library for the Performing Arts’ mission to inspire and support creativity.”

“We are so honored that the Rockwell Group will design the Harvey Fierstein Theatre Lab,” said Jennifer Schantz, Barbara G. and Lawrence A. Fleischman Executive Director of The New York Public Library for the Performing Arts. “Not only are we excited that this partnership will lead to a free and innovative laboratory where our theatre archives will inspire new works, but we are also thrilled to be a part of the historical collaboration between David Rockwell and Harvey Fierstein.”

The Harvey Fierstein Theatre Lab will be an immersive learning environment inside the Theatre on Film and Tape Archives (TOFT). Creating a safe space for risk and artistic exploration, the Lab will invite the next generation of theater artists to see themselves as part of the canon, learning and leaving their mark alongside those who came before. Designed for high levels of flexibility, the Lab’s modern black box design will facilitate a range of activities, from class visits, screenings and workshops to rehearsals, readings and recordings, in an acoustically isolated space.

David Rockwell and the LAB at Rockwell Group are designing a 770-square-foot fully integrated environment that features a series of tools, including modular acting blocks, mobile work surfaces, a projection screen and high-tech design visualization equipment, embedded into the walls. Highlighting the Library’s resources, the entire TOFT collection will also be available at the touch of button, providing artist and educators with the ability to not only read the words of playwrights who have come before, but to step into the worlds they have created.

Theater students and makers of all ages will be invited to use these tools to transform the Lab into the ultimate scene partner—a responsive performance space accommodating multiple needs and uses.

The Library for the Performing Arts is dedicated to enhancing access to its rich archives of dance, theatre, music, and recorded sound—to amplify all voices and support the creative process. As one of The New York Public Library’s renowned research centers—and one of the world’s largest collections solely dedicated to the performing arts—our mission is to amplify all voices and all of our holdings. At present, the collection at the Library for the Performing Arts includes upwards of 8 million items, notable for their extraordinary range and diversity—from 11th-century music to 20th-century manuscripts to contemporary hip-hop dance. The Library also is well known for documenting live theatre, dance and music and is home to the Theatre on Film and Tape Archive, which houses over 8,000 recordings of live Broadway and Off-Broadway productions.