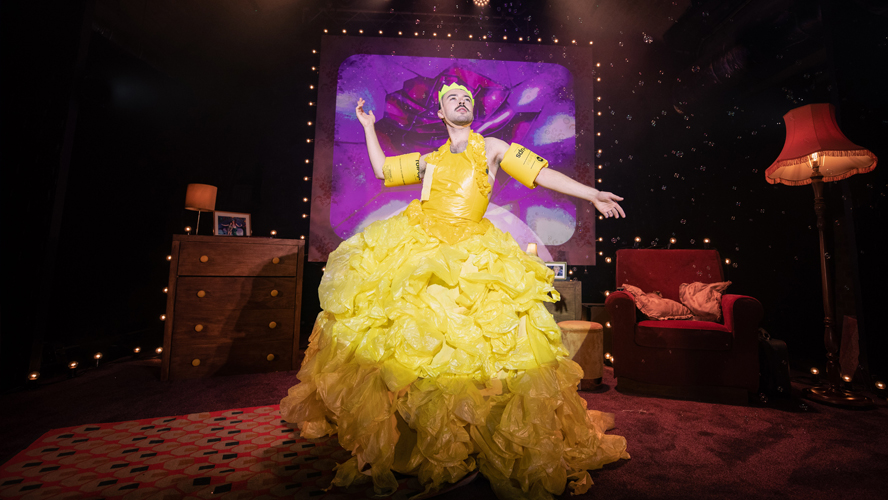 London’s theater scene is humming with activity this fall, with a thrilling slate of revivals, fresh new works and exciting original musicals. The Broadway Blog shares five shows you absolutely cannot miss both on and off the West End right now — so, if you don’t have a plane ticket booked, now might be the time.

My Son’s A Queer, (But What Can You Do?)
written & performed by Rob Madge; directed by Luke Shepphard
October 21 – November 6 at the Garrick Theatre

When Rob was twelve, they attempted a full-blown Disney parade in their house for their Grandma. As Rob donned wigs and played Mary Poppins, Ariel, Mickey Mouse and Belle, their Dad doubled as Stage Manager, Sound Technician and Goofy. Unfortunately, Dad missed all his cues and pushed all the floats in the wrong direction. Mum mistook Aladdin for Ursula. The costumes went awry. Grandma had a nice time, though. My Son’s a Queer (But What Can You Do?) is the joyous autobiographical story of social-media sensation Rob Madge as they set out to recreate that parade – and this time, nobody, no, nobody is gonna rain on it. 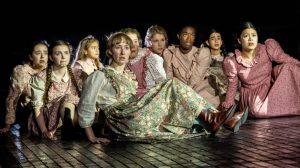 A scene from ‘The Crucible’ (photo: Johan Persson)

The Crucible
by Arthur Miller; directed by Lyndsey Turner
Thru November 5 at the National Theatre

A witch hunt is beginning in Salem. Raised to be seen and not heard, a group of young women suddenly find their words have a terrible power. As a climate of fear spreads through the community, private vendettas fuel public accusations and soon the truth itself is on trial.  Arthur Miller’s gripping parable of power and its abuse returns at the National in an urgent new staging by director Lyndsey Turner (Under Milk Wood, Top Girls).

From a studio in South Carolina, Tammy Faye and Jim Bakker revolutionized religion. Preaching to millions 24 hours a day, Tammy just wants to put the fun back into faith. But a new wave of ministers wants you not to just feel God in your heart, but in your homes, in your schools and in the law too.

How is it possible to be a ‘good’ person when things are falling apart? As the world faces a World War, John Halder, a decent, intelligent, music-loving German professor, finds himself swept along in a movement that crescendos towards an unthinkable finale. Good is a warning for our times.

Olivier Award-winning director Dominic Cooke reimagines one of Britain’s most powerful, political plays with David Tennant returning to the West End alongside Elliot Levey and Sharon Small, for 11 weeks only. 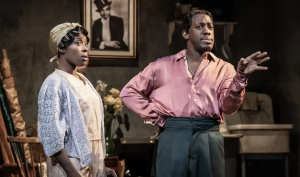 Blues for an Alabama Sky
by Pearl Cleage; directed by Lynette Linton
Thru November 5 at the National Theatre

New York, 1930. Following a decade of creative explosion, the Harlem Renaissance is starting to feel the bite of the Great Depression. In the face of hardship and dwindling opportunity, Angel and her friends battle to keep their artistic dreams alive. But, when Angel falls for a stranger from Alabama, their romance forces the group to make good on their ambitions, or give in to the reality of the time.