Top Posts
‘KPOP’ Cast Album Coming in 2023
‘The Phantom of the Opera’ Delays Broadway Closing...
A Christmas Guide to New York Theater
Ingrid Michaelson Rings in the Holidays for Two...
Review: ‘& Juliet’ Is A Daffy, Absurdly Joyous...
Jinkx Monsoon & BenDeLaCreme’s ‘The Jinkx & DeLa...
Review: Victoria Clark Shines in the Refreshingly Original...
Review: Mike Birbiglia Astounds in ‘The Old Man...
A Sondheim Stocking Stuffer: New Book Offers Insightful...
From ‘Tattooed Lady’ to ‘KPOP,’ Plus A Quick...
Home Beyond Broadway Four Women and a Funeral: ‘Out of the Mouths of Babes’
Beyond BroadwayReviews The cast of ‘Out of the Mouths of Babes.’ (Photo: Carol Rosegg via The Broadway Blog.)

Audiences desperate to escape the headlines about terrorism, Zika, presidential politics, Brexit, and the struggles of New York’s baseball teams are greeting Israel Horovitz’s Out of the Mouths of Babes, efficiently directed by Barnett Kellman at the Cherry Lane, with the rolling thunder of raucous laughter. The jokes may be flabby, the situations strained, the dialogue sit-comedic, and the ambience Neil Simon retro but they’re carried off with enough panache by a cast headed by Estelle Parsons and Judith Ivey for happy theatregoers to tell the critics to go take a hike.

In this latest example of a play created in The Big Chill mode of people assembled because of their mutual relationship to someone who’s just died, four women (fashionably costumed by Joseph G. Aulisi) assemble in the high-walled Paris loft-apartment (tastefully designed by Neil Patel) of a Sorbonne professor who’s passed on at 100. The place, dominated by two sets of tall French windows, is dressed with numerous paintings (you get a diagram when you leave identifying titles and artists, including celebrities like Joel Grey).

Three of the mourners are Americans, each one of the departed’s former wives or lovers, who’ve flown in for the funeral. They’re Evelyn (Parsons), 88; Evvie (Ivey), 68, a.k.a. Snookie (also the name of the late Lothario’s first wife, who leaped to her death out of one of those windows); and Janice (Angelina Fiordellisi), 58. The fourth is Marie-Belle (Francesca Choy-Kee), a Senegalese beauty, 38, with a Pepe Le Pew accent, who’s been the professor’s girlfriend for nearly two decades, even though she was 17 and he 79 when they first became lecher and lechee. It’s her hope she can get the others to live out their futures together. Judith Ivey, Angelina Fiordellisi and Estelle Parsons in ‘Out of the Mouths of Babes.’ (Photo: Carol Rosegg via The Broadway Blog.)

Thus the setup: four women, strangers to one another, share memories of the old man they all loved (and whose philandering charms remain a mystery) in a mélange of casual vulgarities, bitchy rejoinders, predictable jealousies, and generic backstories; threading it all together are elements of suicide and the supernatural, both treated as farcical devices.

Janice once tried killing herself by jumping out one of the windows only to land on a pile of laundry; her continuing readiness to go high diving into the Seine at the slightest provocation provides a running joke that garners big laughs. Horovitz’s playful attitude toward death goes even further when he allows the professor’s spirit to make romantic visits to the lovingly accepting Marie-Belle (warning: this play contains simulated invisible tickling and offstage orgasmic moaning).

Dramaturgic padding is provided with statistics about twins, chatter about Boston (where each of the Americans was raised), information about suicide, listings of pop singers, and so on. As the wisecrack-sprinkled dialogue slogs along we keep wondering where it’s all going. Despite a crowd-pleasing bit at the end (keep your eyes on those windows), some may still be wondering.

Neither the satisfactory Fiordellisi (the Cherry Lane’s artistic director) nor the souped-up Choy-Kee make you forget it is Parsons and Ivey you’re there to see. Parsons, two years from 90, is in remarkably tiptop form, her hair cutely short and spiky, enjoying herself with the pizzazz of a woman half her age. She and the delightfully spirited Ivey zing one another with 100 horsepower snarkiness, getting plenty of mileage out of Horovitz’s comic ripostes. Several of their biggest laughs come during the following exchange when Marie-Belle hears that the professor loved cunnilingus and asks for an explanation (a huge stretch given her fluency and education):

Marie-Belle: He did. C’est vrai.

Evelyn: He was totally cunnilingual.

Evvie: He spoke in many tongues.

Believe me, out of the mouths of these babes even these lines will exercise your rictus muscles. While Parsons and Ivey can’t make Out of the Mouths of Babes a better play, being in their presence for two hours is providing audiences a welcome summer respite from the headlines outside.

Out of the Mouths of Babes
Cherry Lane Theatre
38 Commerce Street, NYC
Through July 31 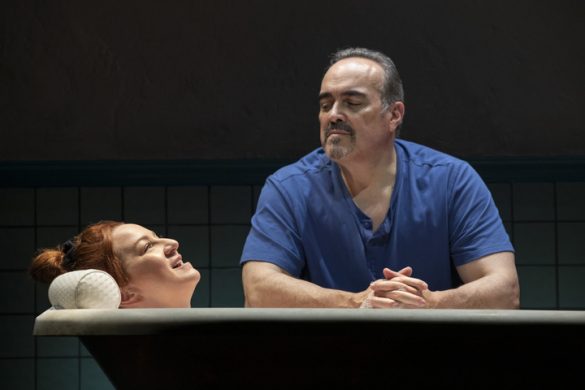