Top Posts
‘Company’ to Hit the Road on North American...
Meet the Full Cast of ‘Shucked,’ Coming to...
Full Cast for ‘Parade’ Announced
Stephen McKinley Henderson Gives the Performance of His...
The McKittrick Hotel Announces the Return of ‘The...
Broadway Stars Honored with Academy Award Nominations
Taylor Trensch, Danny Wolohan, and More Join the...
A Gay Road Trip Comes to The Brick...
Maude Apatow of ‘Euphoria’ is the Next Audrey...
Tony Award Winners to Star in ‘Hercules’ at...
Home Beyond Broadway FringeNYC Festival Unravels Unusual Theatrics
Beyond BroadwayReviews The 2013 FringeNYC Festival, now in its 17th year and featuring close to 200 shows performed at 18 different venues throughout lower Manhattan from August 10th-25th, kicks off tonight. The engine that drives the Fringe is emerging talent – approximately 2,000 artists from around the world descend on New York City to perform plays, poetry, solo shows, musicals and more. These are stars yet to be born, independent production companies crowd-sourcing to get make their dreams a reality, young playwrights achieving milestones and theatrical entrepreneurs who write, produce and perform their own new works.

How is a theatergoer to choose? The TomKat Project and Recipe For Success With Chef Michael Denardi are appearing on most buzz lists for very good reasons — they both successfully satirize celebrity culture to hilarious effect. If you like shows inspired by show business itself, also check out The ABC’s Guide To Getting Famous and for “The Godfather” lover in you, Horsehead. (No word yet on whether they reenact the epic, bloodcurdling scream.)

From Hollywood to Eastern seeking, look for Melting in Madras and Shyama: The Legend of Krishna, both of which use music to advance stories about spiritual quests and pilgrimages. Ndebele Funeral also uses music — and gumboot dancing! — in this case to tell the story of three characters living together in Soweto, South Africa.

Graphic novels more your thing? The Fringe has that, too, of course. Look for Manic Pixie Dream Girl: A Graphic Novel Play, a dark comedy about an artist and his muse. There is also the play about a Manhattan woman’s attempts at celibacy — check out See Jane Give Up Dick — which you might want to pair with Swedish import Fxxx Me before recovering with Carroll Gardens Aborning, a show about two Brooklyn couples dealing with secrets on the road to parenthood. For something a little sweeter, Australian import, I (honestly) Love You, a comedy about two people who find love after being inflicted with a disease that compels them to tell the truth.

If looking to get political, don’t miss Somewhere Safer, which tackles the dangers of extremism in the aftermath of a terrorist explosion in New York City. For sports enthusiasts (guilty!) you must check out Pep Talk, a fictionalized monologue play based on the wisdom of former FC Barcelona football coach, Pep Guardiola. There is even a play about the rain! Or, more specifically, Strange Rain, a “noir journey of conspiracy about a relentless rain and its link to the 1950s and a scientist building weather-control machines.” Are any Fringe shows appropriate for the whole family? Yes. The Young Olympians and The Most Amazingly Awesome Adventure Ever is described as “Part Goonies, part Scooby Doo and musical fun for all ages” as well as Bully, which chronicles the life of a boy who was bullied throughout childhood but triumphs to tell the tale.

And for that experimental, “I-have-no-idea-what-is-going-on here-but-I-think-I-like-it” performance art piece, I leave you with Morning to be Changed from the Morning to the Morning, or Belly of the Whale and its mind altering show blurb: A Portrait in 24 hours or 25 frames Fragments of a broken Self journey through the hours of a day. 5678910111212345678910111212345 But who are these people? What is it in their language that is so contagious? Don’t they recognize each other? 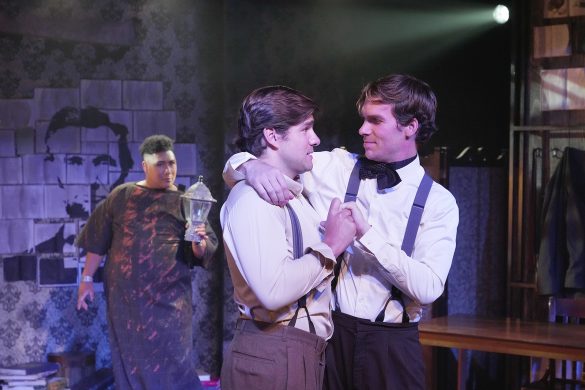