Top Posts
‘Company’ to Hit the Road on North American...
Meet the Full Cast of ‘Shucked,’ Coming to...
Full Cast for ‘Parade’ Announced
Stephen McKinley Henderson Gives the Performance of His...
The McKittrick Hotel Announces the Return of ‘The...
Broadway Stars Honored with Academy Award Nominations
Taylor Trensch, Danny Wolohan, and More Join the...
A Gay Road Trip Comes to The Brick...
Maude Apatow of ‘Euphoria’ is the Next Audrey...
Tony Award Winners to Star in ‘Hercules’ at...
Home Show Folk From ‘Tattooed Lady’ to ‘KPOP,’ Plus A Quick Wedding: Max Vernon Talks a Busy Year
Show Folk 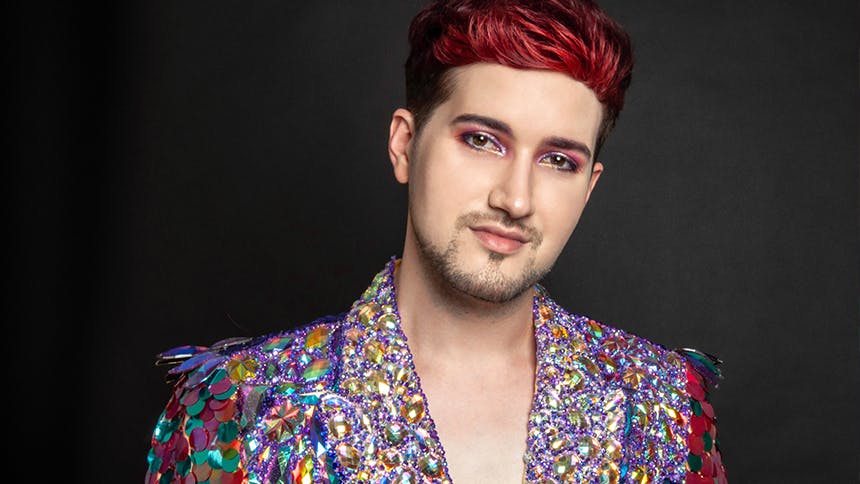 Max Vernon has been busy. The composer/lyricist’s new musical The Tattooed Lady is currently receiving its world premiere at Philadelphia Theatre Company through November 20, with an ensemble cast featuring theater icon Jackie Hoffman. Meanwhile the Broadway iteration of KPOP, for which Vernon collaborated with Helen Park on music and lyrics, opens this Sunday at Circle in the Square Theatre. Plus their breakout show The View UpStairs debuted in Japan earlier this year. And somewhere in there, Vernon also found time to get married.

The Broadway Blog spoke with Vernon about a packed year and their many exciting projects. 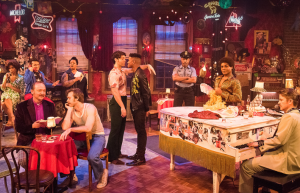 A scene from “The View UpStairs” (photo: Kurt Sneddon)

THE BROADWAY BLOG: You are really having a moment right now, with two musicals you’ve been developing for years, Tattooed Lady and KPOP, both getting major productions at the same moment. How has it all been going?

I have not been sleeping, obviously. Especially because on Tattooed Lady, in addition to being the co-book writer, composer and lyricist, I am also the orchestrator. It’s my first time fully orchestrating a score. So it has been a lot, but it’s also been really magical and cool to see so many different audiences experiencing my work at the same time.

BB: How many performances did The View UpStairs manage in Japan?

We managed to make it through all 18 performance in Tokyo. The show was supposed to go on to Kyoto and have another seven performances. Unfortunately, that part was canceled. But honestly it was a small miracle that we managed to get through the run in Tokyo, because that was when Covid was completely blowing up in Japan, really for the first time since the pandemic began.

BB: You’ve been developing The Tattooed Lady for five years. How has it been to finally see it fully staged, and is it still very much in development?

Oh yeah. This iteration, though it is technically the “World Premiere,” is basically the most glorified workshop production I’ve ever had. A very expensive workshop. But Tattooed Lady wants to be a huge Broadway show!

It’s gratifying to see it on its feet because there’s a lot about Tattooed Lady that, on the page, seems impossible. I describe it as Rocky Horror meets Angels in America: Perestroika. It takes place over 120 years in history. It tells the stories of all these different tattooed ladies, but also follows this imagined tattooed lady we created named Imagena Gibson, and her experience of hiding out in suburbia and then, hopefully, going back to the freak show. 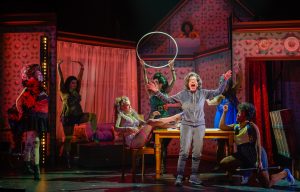 A scene from “The Tattooed Lady” (photo: Johanna Austin)

The goal was to create something that was wild and rock n’ roll and provocative, but also had a much deeper emotional message about inspiring people to feel like they have agency over their own bodies. The tattoos in our show are a metaphor for the choices you make in your life, both the ones that you’re proud of and the ones which cause you pain, and figuring out if you can put it all in the light, accept it and be okay with it.

There is a lyric in the last song which goes, “My body, my design.” And even though the show takes place both in 1880 and 1980, there’s so many ways in which the show is speaking to this moment, about women having agency over their bodies and making those choices. 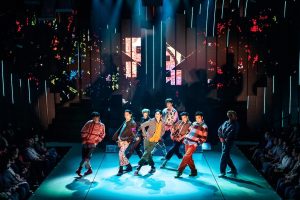 BB: Meanwhile you are also about to open KPOP on Broadway. You’ve also been involved with that one for many years, going back to its immersive 2017 Ars Nova production, but it has been completely reshaped as a proscenium experience for Broadway. How is that going?

It’s been really exciting in this time in which there’s a lot to be scared about, and depressed about, to have a show that feels so joyous, effervescent and exciting.

But also yes, it was a huge undertaking. Off-Broadway there were over 40 pieces of music, and we created scenes which spread over three floors of a building. In standardizing it for one space, a lot had to be changed and reshaped. We had to cull a lot of material, so it was a fair bit of “Kill Your Babies.”

The production design elements are insane, the costumes are insane, there’s something like 17 costume changes for every cast member; it is a full blown wild spectacle. I would say to people: do not expect KPOP 1.0. This is an almost entirely new show.