Top Posts
‘Company’ to Hit the Road on North American...
Meet the Full Cast of ‘Shucked,’ Coming to...
Full Cast for ‘Parade’ Announced
Stephen McKinley Henderson Gives the Performance of His...
The McKittrick Hotel Announces the Return of ‘The...
Broadway Stars Honored with Academy Award Nominations
Taylor Trensch, Danny Wolohan, and More Join the...
A Gay Road Trip Comes to The Brick...
Maude Apatow of ‘Euphoria’ is the Next Audrey...
Tony Award Winners to Star in ‘Hercules’ at...
Home Reviews Broadway’s Bawdy Bloodbath: ‘Gary: A Sequel to Titus Andronicus’
Reviews 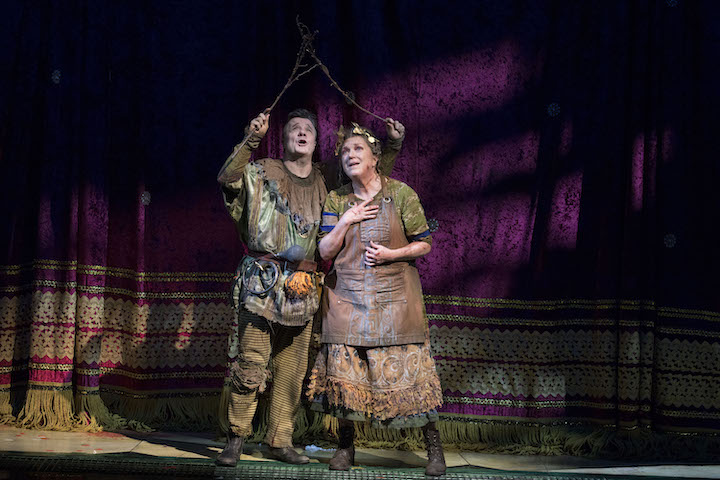 Gary is on Broadway, but it isn’t Marian the librarian’s hometown — that one arrives next year. Right now, we must deal with the carnage.

Downtown performance artist Taylor Mac (whose preferred pronoun is “Judy”) has christened Broadway’s Booth Theatre with a unique brand of quirk and activism, the likes of which have never been seen in such a commercial space. Bravo, Taylor Mac, Bravo! And kudos to the show’s producers for financing the irreverent and fracturing the status quo.

Audiences and critics have been (and will continue to be) deeply divided over Gary: A Sequel to Titus Andronicus, its style, and what it all means. At least we’ll get some full-blown belly laughs out of this one, thanks to Nathan Lane, Kristine Nielsen, and Julie White. Besides, even Lane isn’t one hundred percent sure of the significance. “It’s like Bert Lahr said when he read Waiting for Godot,” Lane recalled in a Playbill interview, “‘I don’t know if I understand it all, but I have the nagging suspicion this might be important.'”

Whether this will have the longevity and importance of the classic Beckett play remains to be seen. Yet while it’s still here, let’s rejoice in this bawdy bloodbath. 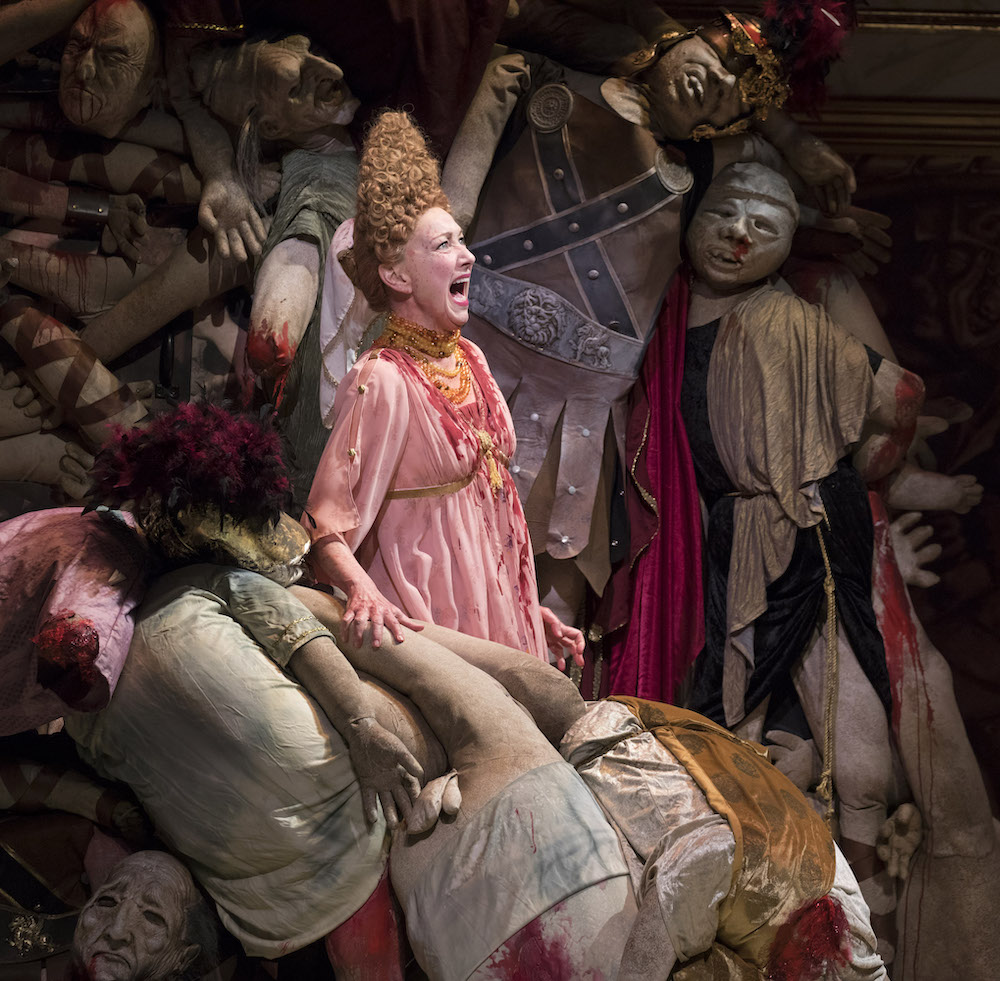 Carol (Julie White), a daffy midwife, opens the show, announcing some bad news in rhymed verse and spurting blood after a near decapitation. Moments later, the curtain rises on a stockpile of slaughtered bodies: The Roman Empire has been defeated. Gary (Lane) and Janice (Kristine Nielsen) are charged with cleaning up the corpses. Gary (who hails from a family of clowns) is an unsuccessful jester and, much to Janice’s disapproval entertains himself by posing with the stiffs and turning them into his own toys. A tough-as-nails Janice is fed up with his antics and just want to get the job done, which entails embalming the bodies and providing a proper burial. At the same time, she decries the wealth and status this dead bunch once had. Both rail against the system that has long oppressed them, but are resigned to their current lot in life.

It’s unclear entirely what Mac is trying to tell us through these whacky characters. Is this a commentary on our country’s current cultural landscape? Have we commoners been hijacked by brazen elitists who have gutted the soul of our nation and now, we’re left to clean up the wreckage? Or, does this trio serve as a prescient warning for the future? Oh, to be a fly on the wall in production meetings with Mac and director George C. Wolfe. Perhaps there is no making sense of it. Maybe we are just relegated to the tasks at hand — stuck in the mundane — allowing life to happen to us rather than proactively changing it. Such existential questions will linger long after the curtain falls.

That’s what makes Gary such a rare, hilarious, and thoughtful work. Though, in the hands of less talented actors, I’m not so sure it would work as well. Time and time again, the Tony Award-winning Lane has proven himself to be one of our country’s finest stage actors. This is no exception. For as outlandish as this piece is, there are moments of poignancy and subtlety that he embraces, creating an empathetic view of the Everyman simply doing his best. 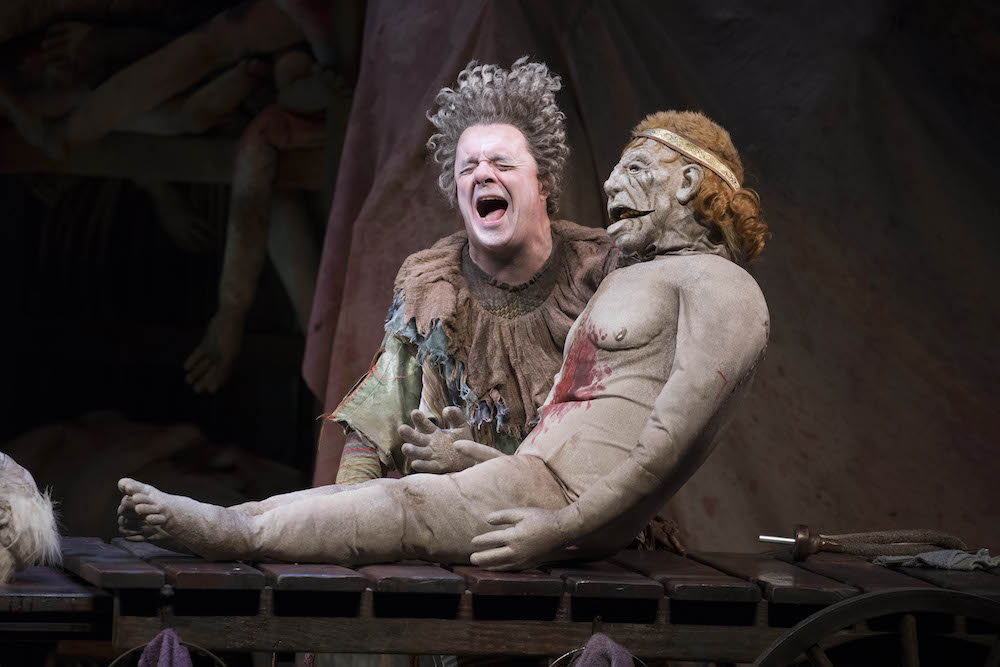 Nielsen is also terrific as she bosses around her underling and teaches him how to siphon body fluids.

Tony-winner White deserves the most praise here. Although she is onstage less than her counterparts, the backstage drama of how she landed the part is impressive. Initially, Nielsen was playing White’s role (Carol) and Andrea Martin was cast as Janice. At the beginning of March, Martin broke her ribs and had to bow out. Consequently, Nielsen stepped into the role of Janice and White had less than a week to prepare as Carol. It would be a difficult task under any circumstance, but given the comedy’s absurdist nature, it’s nothing short of miraculous.

There are several references to Shakespeare’s Titus Andronicus, but one need not have familiarity or knowledge to enjoy Gary. What you will need is an open mind and an iron stomach.