Top Posts
‘Company’ to Hit the Road on North American...
Meet the Full Cast of ‘Shucked,’ Coming to...
Full Cast for ‘Parade’ Announced
Stephen McKinley Henderson Gives the Performance of His...
The McKittrick Hotel Announces the Return of ‘The...
Broadway Stars Honored with Academy Award Nominations
Taylor Trensch, Danny Wolohan, and More Join the...
A Gay Road Trip Comes to The Brick...
Maude Apatow of ‘Euphoria’ is the Next Audrey...
Tony Award Winners to Star in ‘Hercules’ at...
Home Beyond Broadway Cloudy Vision: ‘The Girl with the Alkaline Eyes’
Beyond BroadwayReviews 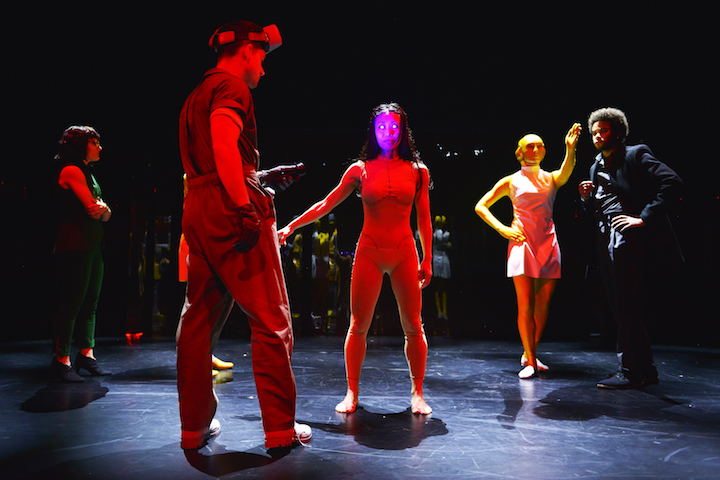 ‘The Girl with the Alkaline Eyes’ (Photo: Michael Kushner Photography)

Chase Brock has his eyes on the future.

The artistic director of the self-named Chase Brock Experience offers audiences the company’s first evening-length dance theater piece, The Girl with the Alkaline Eyes. Additionally, he’s choreographed the highly anticipated Broadway transfer of Be More Chill, the sci-fi teen musical with a tsunami-like Gen Z social media following. While the two works differ stylistically, they both nudge viewers into the not-so-distant future when AI (artificial intelligence) may give humankind a run for its money.

Mr. Brock has collaborated with Eric Dietz (credited for scenario and score, though the former attribution is a bit unclear) to create an expressionistic tale of technological evolution in which robots eventually take over society. It’s a cautionary tale that, in spite of its high-tech setting, doesn’t necessarily push boundaries regarding storytelling or execution.

The six-member ensemble receives a slick playground thanks to Jason Sherwood’s vinyl flap-framed set design, which provides the backdrop for undulating projections by Alex Basco Koch. At a recent preview performance, the smell alone was enough to offer a sense of post-apocalyptic toxicity. Brian Tovar’s lighting, Ryan Rumery’s sound, and Loren Shaw’s costumes all raise the bar on Mr. Brock’s work, with occasional nods to the 60s and other past-meets-future visual references. (This is a world where virtual reality is commonplace, but an investor still writes an old-fashioned check instead of using NFC technology.) 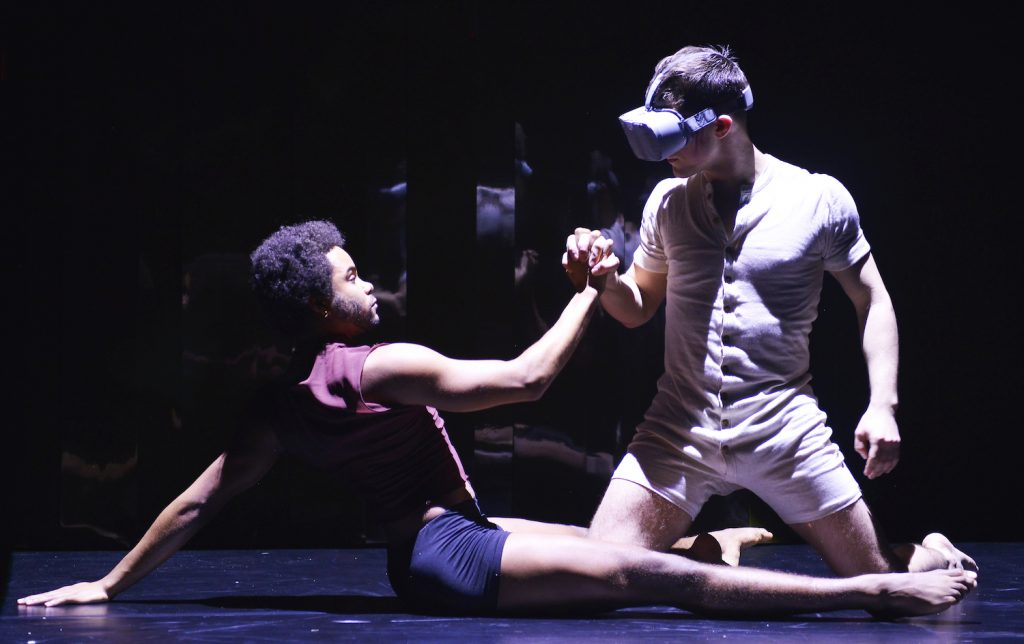 (l to r) Travante S. Baker and Spencer Ramirez in ‘The Girl with the Alkaline Eyes.’ (Photo: Michael Kushner Photography)

Mr. Brock’s choreography credits span genres from musical theater to concert dance, opera and television. Tasked here with delivering an arching narrative as well as movement, he’s more successful in the latter, while the story — one of emotional evolution and destruction — never manages to fully tug at the heartstrings. There are exquisite moments, such as a whimsical nightclub scene with hints of Fosse and Bollywood, or a modern pas de deux between Travante S. Baker and Yukiko Kashiki and its virtual reality re-do with Spencer Ramirez.

Unfortunately, those breathtaking moments succumb to cliché bits of pantomime and facial expressions that telegraph emotion rather than embody it. The young dance ensemble, while physically adept, can’t tap into Mr. Brock’s more profound vision.

Italian writer Carlo Collodi penned Pinocchio in 1883 and more than a century later, cultures continue to wrestle with the connection between the inanimate and the real. Andrew McCarthy and Kim Cattrall in Mannequin and director Paul Verhoeven’s RoboCop (both released in 1987) tackled the subject with romantic and dystopian perspectives.

The Girl with the Alkaline Eyes follows suit with a 21st-century sensibility, as we’re closer than ever to science fiction becoming a reality. At its core, though, the dance theater piece’s cloudy construct fails to address the million-dollar question: Why are we obsessed with engineering synthetic creations to produce human emotion when its creation often distances us from the intimacy we so desperately desire?