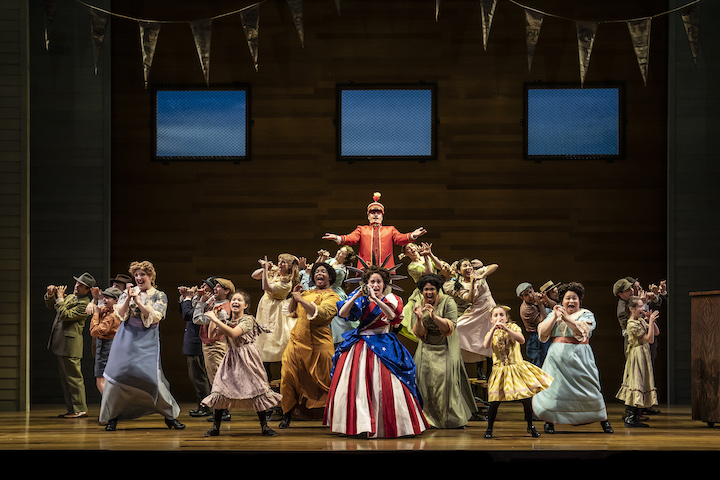 Whenever a high-profile theater undertakes the revival of a beloved, oft-staged musical classic, it assumes many risks. Among them is the possibility of the source material failing to connect with a modern audience, or that the given production will fail to say or add anything new. But if there’s one thing Chicago’s artistic community knows about the partnership between Goodman Theatre (Sweat, The Winter’s Tale, The Wolves) and Tony Award-winning director Mary Zimmerman, it’s this: neither party shirks a challenge.

Helming her 16th Goodman production, Ms. Zimmerman offers her visionary take on The Music Man, the timeless tale of a con artist who collectively romances a small town in Iowa – and gets the girl. The musical, with book, music and lyrics by Meredith Willson, won five Tony Awards during its original Broadway run in the late 1950s and continues to leave a significant imprint on American pop and musical culture. Broadway will be welcoming its own star-studded version with Hugh Jackman and Sutton Fuster in 2020).

Yet Goodman Theatre’s take on The Music Man is not the fusty fodder of 20th Century summer stock. Ms. Zimmerman, her cast and creative team make this abundantly clear in the production’s utterly magical first few minutes. The experience gave me goosebumps, and that’s no small feat considering the scene’s otherwise routine ubiquity in thousands of local productions.

Those who have seen any incarnation of the beloved musical will recall the opener well. It’s the summer of 1912, and a crew of traveling salespeople sits aboard a train leaving Rock Island, Illinois, discussing a known scam artist. They are unaware that Harold Hill is in their midst. Mr. Hill has earned a reputation for invading small towns and fleecing parents by promising to turn young children into band members, taking payments for instruments and uniforms, then skipping town with the money. Ever gleeful and perverse, Harold Hill announces his presence to the harassed sales folk before alighting at the train’s next stop — River City, Iowa. 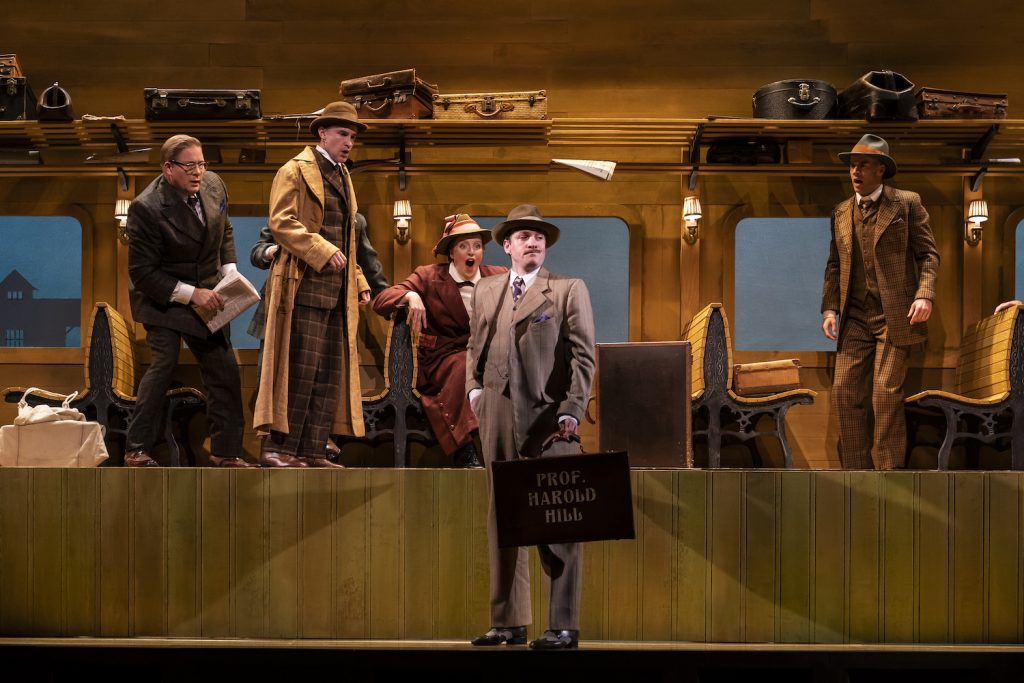 This plot summary does little justice to Ms. Zimmerman’s spellbinding rendering of the scene, which begins with set designer Dan Ostling’s peek-a-boo perspective. A window opens a view into the side of the train and the conversation, offering audience members the delicious experience of eavesdropping. Ray Nardelli’s percussive sound design reinforces the scene’s success, which evokes the audio sensation of riding the rails. Lastly, the marvelously talented and well-choreographed (thanks to Denis Jones) cast members move their bodies, and the dialogue, in time with the beat. In over a decade of reviewing Chicago theater, Mary Zimmerman’s The Music Man features the most well-done, exciting introduction to any work I have seen.

Geoff Packard is one hell of a Harold Hill, giving the legendarily rootless man-child a whole lot of authentic heart. His banter with Monica West as Marian Paroo crackles with sexual and intellectual chemistry, but it’s the touching bond he forms with Marian’s lisping younger brother Winthrop (Carter Graf) that will leave audiences swooning for the bad guy gone good.

The supporting cast members are as much of a knockout as the leads. Heidi Kettenring makes a huge comedic splash as Eulalie Mackecknie Shinn, the First lady of River City. On paper, the character of Eulalie reads like a silly throwaway, a glorified extra. In Ms. Kettenring’s hands, the Mayor’s wife is vain, untalented and completely lacking self-awareness in the most endearing fashion. She renders the character unforgettable.

The production sustains this quality and exuberance for two hours and 15 minutes (with one intermission). Almost impossibly, there is not one weak or throwaway scene and certainly no incidental performers. It’s a non-stop barrage of color, dance, humor and character that cannot fail to please. And just TRY to get the orchestra’s infectious, exuberant interpretation of “Seventy-Six Trombones” out of your head. Forty-eight hours removed from the experience, I’ve had no success.

Given Goodman Theatre’s announcement of a two-week extension before the show even debuted, it’s clear the company is well aware that it has struck theater gold. The Music Man is a must-see.