Top Posts
Review: ‘Stranger Sings! The Parody Musical’ Is Still...
Performances Have Begun for ‘The Piano Lesson’
‘Monet’s Garden, The Immersive Experience’ Comes to NYC...
‘The Phantom of the Opera’ Will Close on...
Watch: Little Amal Arrives at JFK, Beginning 17...
Lillias White Takes the Stage as Hermes in...
‘The Music Man’ Sets Broadway Closing Date
‘Heathers: The Musical’ Releases First Clip Ahead of...
‘Into the Woods’ Extends One Final Time
Josh Groban and Annaleigh Ashford ‘Sweeney Todd’ Coming...
Home Beyond Broadway In ‘The Green Room,’ Offstage Antics Don’t Steal the Show
Beyond BroadwayReviews 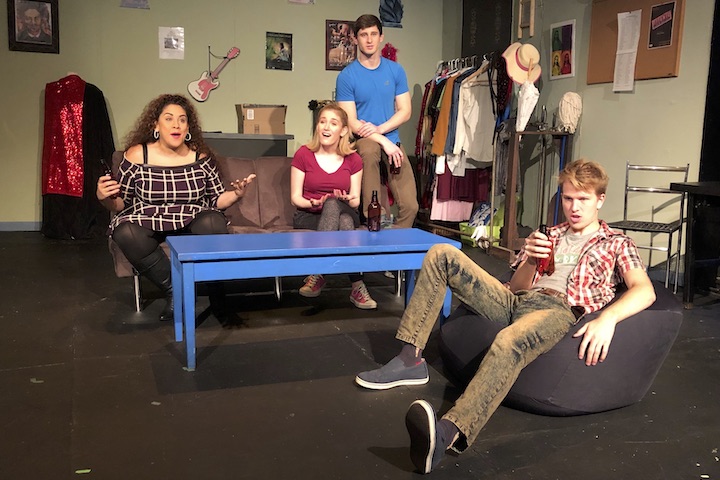 The Green Room, a cheesily produced, cliché-riddled, creakily written, and cartoonishly-performed “new” Off-Broadway musical, has been around at least since the making of a workshop-based CD in 2005. A blogger declares it’s had productions “from sunny California to the green shores of Ireland.”

Given that it’s about a group of four college students at a small midwestern college planning to produce their own Off-Broadway musical, and that this is its New York premiere, it would be nice to report that the highest hopes of both its characters and producers have been realized.

Unfortunately, that’s anything but the case, despite a few redeeming factors on which a better production might have capitalized. From the minute you see the chintzy, flimsily constructed, amateurish set on the Sargent Theatre stage, an insecurity blanket wraps itself around you. Alla Korenblyum is credited as “graphic artist,” whatever that means (the program cover?), but no one is named for the awful set and lighting, and somewhat better costumes, even though “additional costumes” and “additional set pieces” have credit lines. 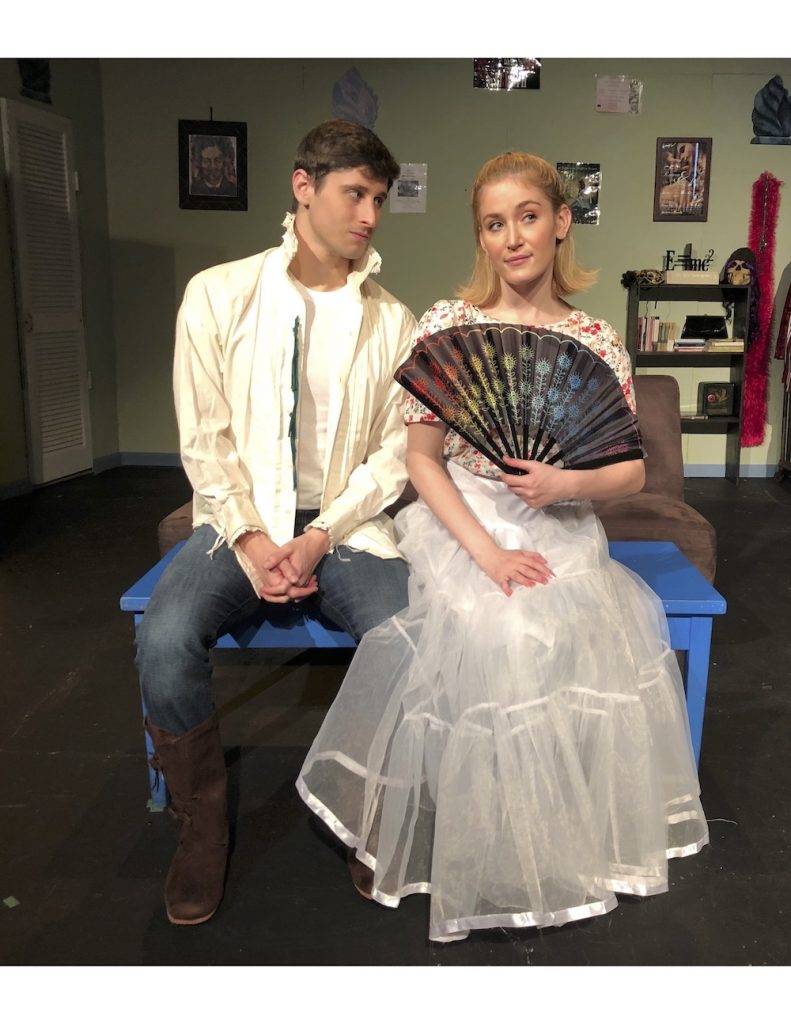 The blanket only gets itchier when you hear a preshow playlist of Broadway and pop tunes. Why put your show’s original score in competition with the classics? More such songs—like the Carpenters’ “Together” and A Chorus Line’s “What I Did for Love”—play through the intermission. And why an intermission, bloating a 75-minute show to 90? Without a break, some, like others the night I went, wouldn’t be tempted to make an early departure.

Director/choreographer Jessica Jennings does little to dispel the amateur-hour feeling, not only with her hammer-every-moment staging but with the weakest scene transitions you’ll find on a purportedly professional New York stage. A scene ends, the lights fade slightly, we wait a few seconds, and the next scene begins, sometimes with visually intrusive stagehands. Even the cue signaling the end of the show is badly muffled.

As per its title, The Green Room (klutzy book by C. Stephen Foster and Rod Damer) is set in a green room, the traditional hangout for theater students, although those in the show seem not just to occupy it but to live there, especially since no one else ever shows up. The show’s stage-struck wannabes spend the better parts of their lives in this emotional comfort station, bonding, working out their sexual issues, falling in love, rehearsing, studying (did I really hear someone call Molière Restoration comedy?), and planning their dubious show biz futures.

Anna Kearns (Sami Staitman), the wealthy-pretty-nice girl, shies from sex with her boyfriend and refuses (at first) to perform in revealing lingerie. Her boyfriend is the macho actor-dude, John Radford (Corbin Williams), whose dad wants him to give up acting and become an architect. Divonne (Ariana Valdes), is the comic character girl, bursting with attitude. Cliff Kearns (Eli Douglas LaCroix) is Anna’s cerebral, sexually ambiguous brother, who enters, scarf flowing, with a flamboyant flourish but prides himself on his bedroom prowess with Divonne.

The quartet’s mutual conflicts, aspirations, and dilemmas as they rehearse their Moses-based musical, Godsong, and prepare their Off-Broadway show, Don Juan: The College Years, are expressed in a series of songs, not always smoothly connected to the situations and dialogue. Worse, they’re performed to a prerecorded score, its tinny, overamped arrangements played through notably visible speakers at either side. While Charles Pelletier’s mostly generic score, with acknowledged nods to Stephen Sondheim and Jonathan Larson, is the show’s most promising element, this cast—okay when singing harmony—lacks the chops to do the tougher ones much justice.

Thus, a number like the cool, low-key “The All-You-Wanna-Do-is-Do-Me Blues” does the job, while those with the big notes, as in Divonne’s paean to theatrical narcissism, “It’s All About Me,” are often screamed or offkey. Even the most determined mugging and eager business do little to soften their blows to our eardrums.

Witty lines and truthful moments are rare, an idea of the show’s humor being Cliff’s blandly risqué response to Divonne’s costume as the biblical Burning Bush, “I’ve never seen a lovelier bush.” When she, for her part, wants to end her relationship with Cliff, all she can come up with is “I think I’m a lesbian.”

My advice: maybe architecture’s not so bad an idea.