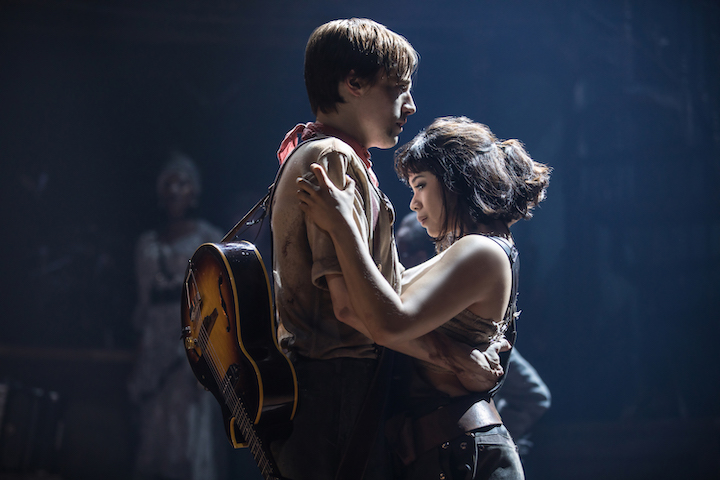 Confession: I cheated my way through Ancient Literature during my freshman year of college. My roommates and I divided and conquered the 9 a.m. class, each sleeping our way through lectures and oral recitations. Had Hadestown — the gut-punching musical mash-up of Orpheus and Eurydice, and King Hades and his wife Persephone — been a point of reference, who knows… I might have become a scholar. Or at the very least, stayed awake.

Anaïs Mitchell’s (music, lyrics and book) re-telling of the Greek myths offers a moody, thematically atmospheric take on love, jealousy, and self-worth. With director Rachel Chavkin at the helm, its visceral theatricality will likely linger in your psyche long after the cast raises their cups in a final toast to flowers that bloom in the bitter snow and birds that sing in the dead of night.

Narrated by Hermes (a charismatic André de Shields, Half Time) and reinforced by a trio of Fates (Jewelle Blackman, Yvette Gonalez-Nacer and Kay Trinidad) as well as a “workers chorus,” we meet the meek Orpheus (Reeve Carney), who falls in love with Eurydice (Eva Noblezada). Their journey takes them to the Underworld, where Hades (Patrick Page, Casa Valentina) and his wife Persephone (Amber Gray) reside.

Much of their journey flows like lava, enveloping the audience in its path as Eurydice accepts Hades’ promise for a struggle-free life, the Fates reminding us, “You can have your principles when you’ve got a bellyful, but hunger has a way with you.” 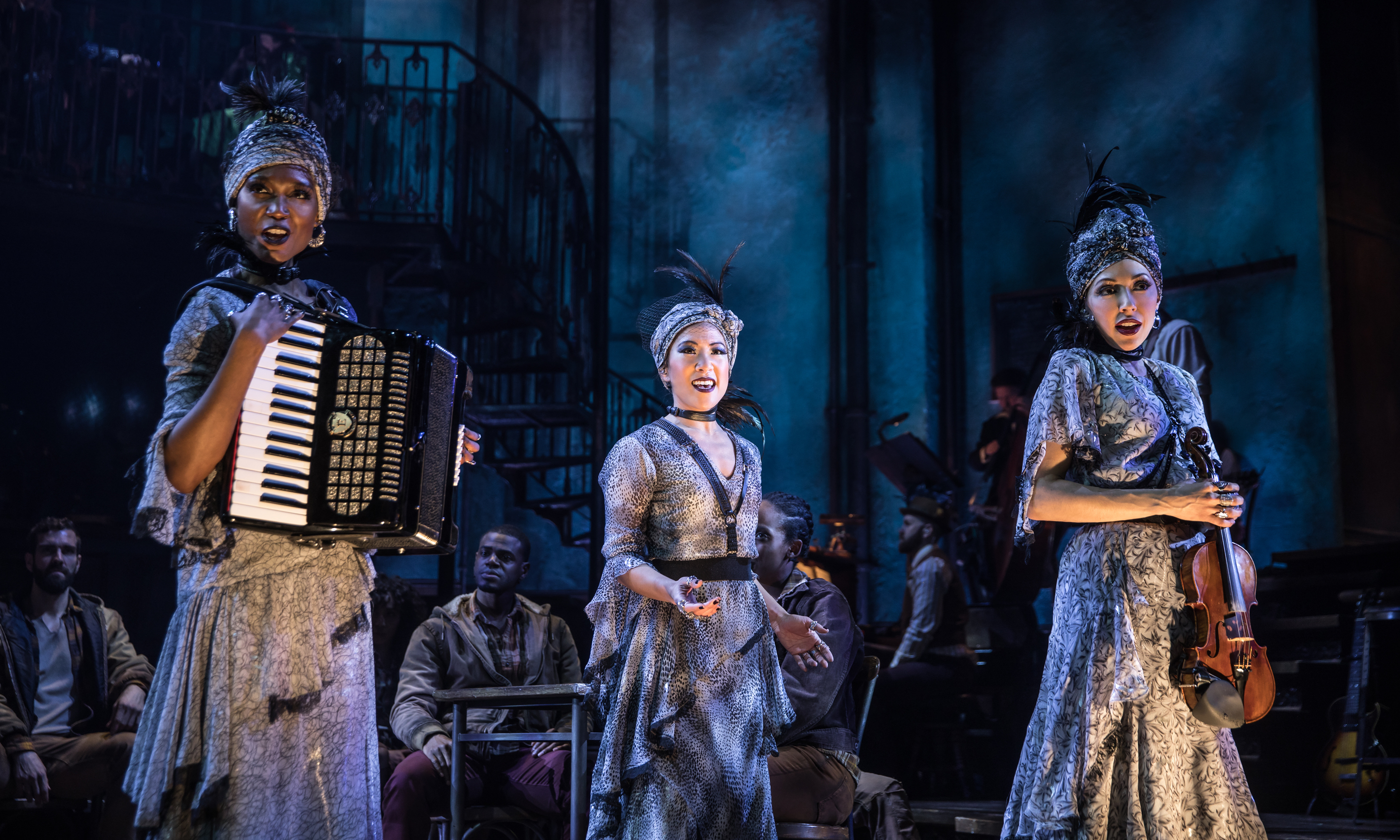 Mitchell’s score, punctuated with Depression-era trombone riffs and gorgeously arranged and orchestrated by Michael Chorney and Todd Sickafoose, relentlessly pulsates. It’s so captivating one might wish that the folk opera skipped the obligatory stop gaps at the end of some musical numbers, which inadvertently hiccup the action, though the engrossed audience may appreciate the reprieve to burst into applause and let off some steam.

The composer also swings big with certain vocal lines, crafting Orpheus as a folksy castrato, his melodies suspended in a nearly uncomfortable range for the charmingly awkward Carney. At the opposite end of the spectrum, Page’s Hades wallows in basso profundo, giving new meaning to “how low can you go?” Collectively, the juxtaposition provides texture and counterbalance.

Noblezada can still tap into the vulnerable innocence that snagged her a Tony nomination for her role of Kim in the 2017 Broadway revival of Miss Saigon, but the actress — thanks in large part to Mitchell’s writing — has matured. Here, she displays a weathered magnetism and is vocally unafraid to embrace the bluesy grit of a young woman at the crossroads of hell.

Gray, too, is a total knockout. Confined to the Underworld then periodically released above, her Persephone is what we might today call a centrist (with a flask at the ready), able to tap into compassion and empathy for Hades as well as the young lovers attempting an escape from his domain. With echoes of a young, unabashed Eartha Kitt it’s virtually impossible to take your eyes off her. 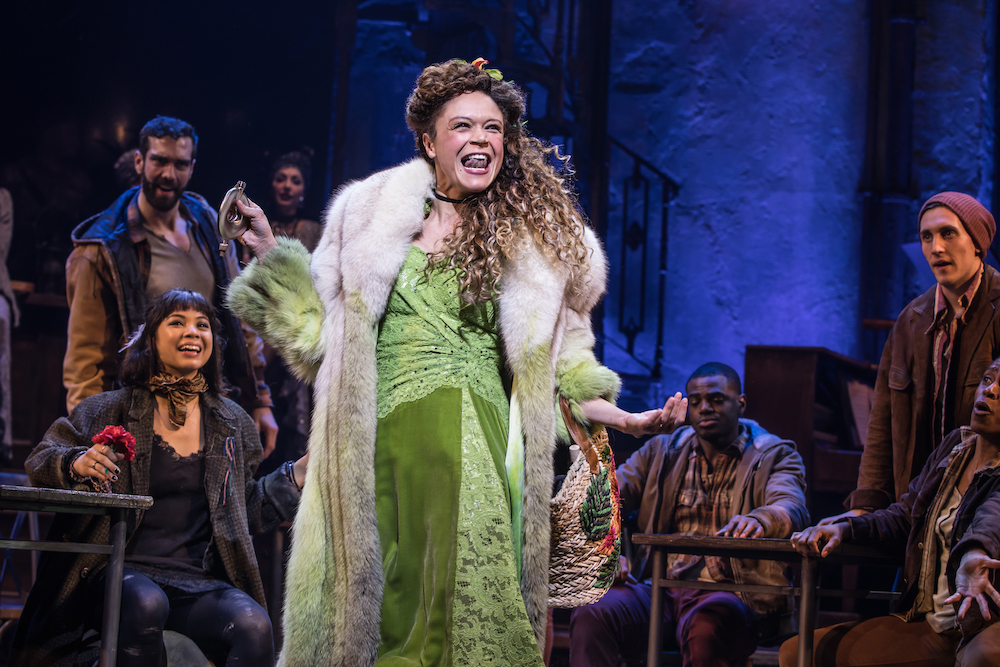 Our current domestic tribulations are but a drop of blood if you take a step back and look at the walls built throughout history: The Great Wall of China, The Walls of Constantinople, and The Berlin Wall, just to name a few. Yet Orpheus, with love so pure, breaches the barrier with “a song so beautiful the stones wept and they let me in.”

Rachel Hauck’s (What the Constitution Means to Me) scenic design brings those walls to fruition, delivering a gritty, Industrial Era saloon that fractures into Hade’s Underworld. Moodily lit in stark shadows and deeply saturated hues by Bradley King, the interlaid turntables may remind regular theatergoers of Hamilton, though Chavkin and choreographer David Neumann are a bit too frequent with their ever-revolving usage.

Walls take a form other than brick and mortar. Hades offers Orpheus and Eurydice the chance to escape the Underworld, but they must leave single file with Orpheus leading. If he looks back, the deal is null. “Make folks walk single file?” Hermes explains. “Divide and conquer’s what it’s called.”

The outcome befits a Greek tragedy.

Yet it’s a path we’ve all been on before, and one we’ll likely tread again. We will forget to trust those we love. We will look back, and the life we thought we knew will crumble. “And we will always raise ‘em up,” says Hermes, raising a cup. “To the world we dream about! And the one we live in now…”