Top Posts
‘Company’ to Hit the Road on North American...
Meet the Full Cast of ‘Shucked,’ Coming to...
Full Cast for ‘Parade’ Announced
Stephen McKinley Henderson Gives the Performance of His...
The McKittrick Hotel Announces the Return of ‘The...
Broadway Stars Honored with Academy Award Nominations
Taylor Trensch, Danny Wolohan, and More Join the...
A Gay Road Trip Comes to The Brick...
Maude Apatow of ‘Euphoria’ is the Next Audrey...
Tony Award Winners to Star in ‘Hercules’ at...
Home Hot Ticket ‘Hadestown’ Sets Record at Walter Kerr
Hot Ticket 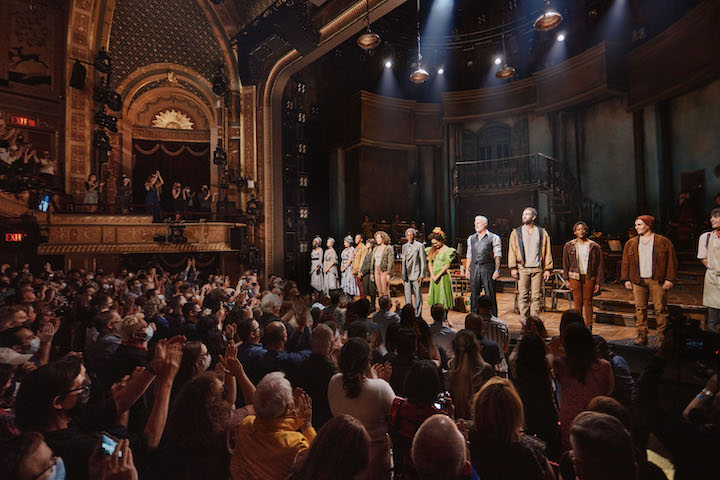 At today’s matinee, Hadestown will play its 918th performance making the Tony and Grammy Award winning musical the longest-running show in the 100-year history of the Walter Kerr Theatre (219 West 48th Street), surpassing previous record-holder Proof and other beloved productions such as A Gentleman’s Guide to Love and Murder, Doubt, Love! Valour! Compassion!, Angels in America, Springsteen on Broadway, Seven Guitars, My Sister Eileen, and many others.

Hadestown began preview performances at the Kerr on March 22, 2019 and opened April 17, 2019 to rave reviews. The production is the most honored show of that season winning Best Musical from the Tony Awards, the Outer Critics Circle Awards, and the Drama League Awards. The show also won the Grammy Award for Best Musical Theatre Album.

Hadestown originated as Anaïs Mitchell’s indie theater project that toured Vermont which she then turned into an acclaimed album. With Rachel Chavkin, her artistic collaborator, Hadestown has been transformed into a genre-defying new musical that blends modern American folk music with New Orleans-inspired jazz to reimagine a sweeping ancient tale.

Following two intertwining love stories — that of young dreamers Orpheus and Eurydice, and that of King Hades and his wife Persephone — Hadestown invites audiences on a hell-raising journey to the underworld and back. Mitchell’s beguiling melodies and Chavkin’s poetic imagination pit industry against nature, doubt against faith, and fear against love. Performed by a vibrant ensemble of actors, dancers, and singers, Hadestown delivers a deeply resonant and defiantly hopeful theatrical experience.

Hadestown marks the first time in over a decade that a woman has been the solo author of a musical: writing the music, lyrics, and book, and is the fourth time in Broadway history a woman has accomplished this creative feat. It also marks the first time in Broadway history that a show’s female composer and female director both won Tony Awards for their work.

The North American tour is currently playing West Palm Beach, FL’s Kravis Center through Sunday, January 8 before continuing to Atlanta’s Fox Theatre where it will start performances on Tuesday, January 10. The tour is celebrating its second year of sold-out performances with return engagements already announced for Washington DC, San Francisco, and a run at Toronto’s Royal Alexandra Theatre starting July 2023. For the latest tour route and other information, please visit: www.hadestown.com/tour