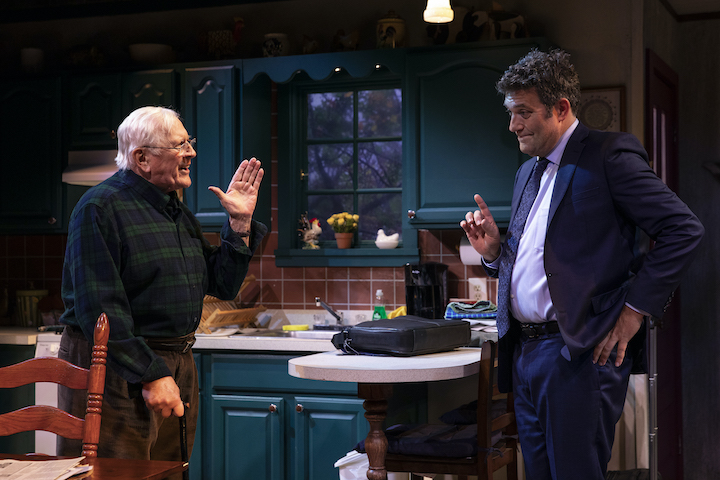 The play, originally seen in Palm Springs in 2015 as Happy Hour, deals in a recognizably human way with a universal problem of emotional relevance to a sizable demographic. It also offers abundant opportunities for a pair of charismatic actors.

The aforesaid “problem” is the familiar one of what to do with one’s elderly parents when they can no longer be trusted to live on their own. Harry Townsend’s Last Stand isn’t another Alzheimer’s play but, if it had a sequel, that would likely be its subject.

Eighty-five-year-old widower Harry Townsend, played by 80-year-old Len Cariou (Sweeney Todd), wearing a plaid, flannel shirt and corduroy pants, has been living in his Vermont, lakeside home (I did say, “formulaic”) for 35 years. He’s visited there by his business-suited (with white sneakers) middle-aged son, Alan (Craig Bierko, The Music Man).

Harry, once a local radio personality known as “The Voice of the Valley,” works hard at projecting an image of macho self-reliance, strength, and mental fortitude. But the reality is clear: he’s increasingly feeble, frequently falls (despite his cane), eats inadequately, burns himself, keeps forgetting and misplacing things, and is careless with his meds.

He boasts about his handshake, offers amusing life advice, tosses off fart jokes, mocks the aging process, enjoys his scotch, ogles a neighbor, and relishes randy recollections of his constantly- referenced late wife. You can practically hear the ice beneath him cracking.

Alan, however, has a plan, which is to sell the house and install his dad in an assisted-living facility. Harry, though, is the kind of prideful old grouch who refuses to accept his condition, lose his independence, leave his memory-infused environment (reminiscent of this season’s The Height of the Storm), and go gently into that good night. 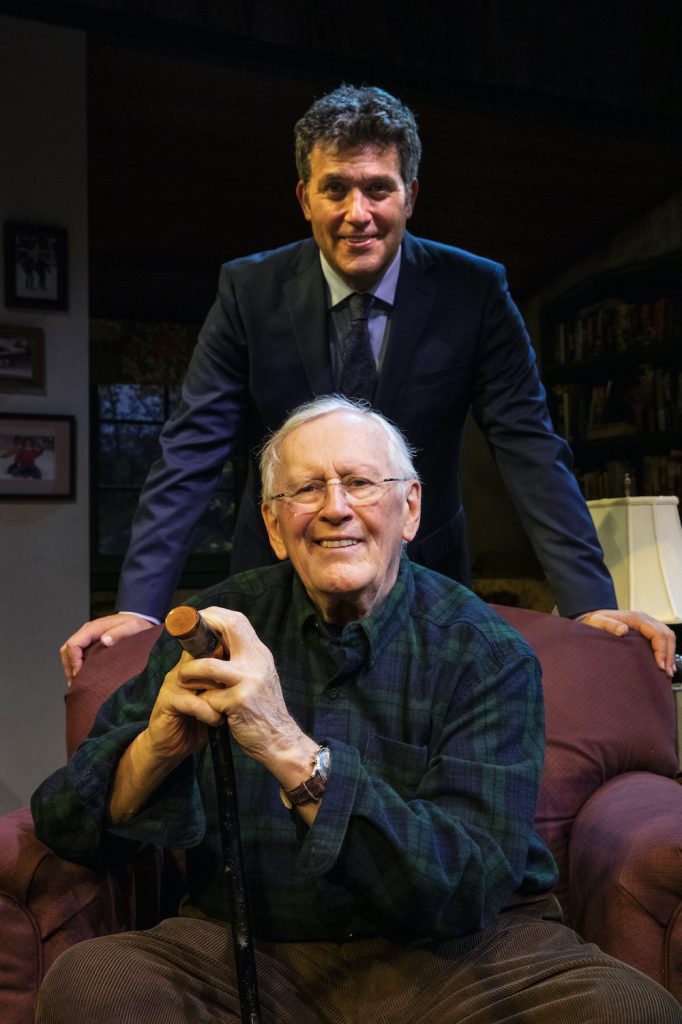 Thus is established the two-act play’s two hours-plus combat zone, in which, until the situation is resolved, father and son clash on multiple levels of anger and compassion. As they do so, buried grievances are unearthed, among them Alan’s feelings about having to pattern his own interests after those of his dad. (A strikingly similar father-son conflict is expressed in Horton Foote’s The Young Man from Atlanta, at the Signature.) As per the play’s well-made construction, it takes a withheld revelation to slice through its Gordian knot.

Cliché landmines dot the landscape and zingers abound, too many more dud than alive, but a few have the comic powder to detonate. The play is too long and can’t help slipping into sentimental tropes. Nevertheless, the treatment of its core issue will resonate with folks in Harry’s age niche. Conventional as the situation is, its enactment emphasizes its pertinence to many lives.

Cariou, as befits his thespian status, can be pridefully defensive, charmingly witty, convincingly confused, and sadly feeble. There are, however, more than a few shaky moments when it’s unclear who’s having difficulty, the actor or the character.

Bierko, in the less showy role, brings warmth and believable concern to Alan, his expressions revealing his struggle between deep love and respect and the towering frustration and worry of dealing with such a stubborn personality.

Karen Carpenter’s direction deftly orchestrates the play’s emotional variations within Lauren Helpern’s expansive, cluttered, well-worn living room/kitchen set. Jeff Davis’s lighting nicely differentiates the time of day in each of the four scenes. John Gromada’s sound score, using a piano rendition of “Autumn Leaves,” may be too obvious, but it adds a nicely bittersweet atmosphere to the events.

George Eastman’s Playbill bio notes that his first play, The Snow Job, “has been produced in community theatres throughout the country.” It’s not difficult to predict a similar fate for Harry Townsend’s Last Stand.