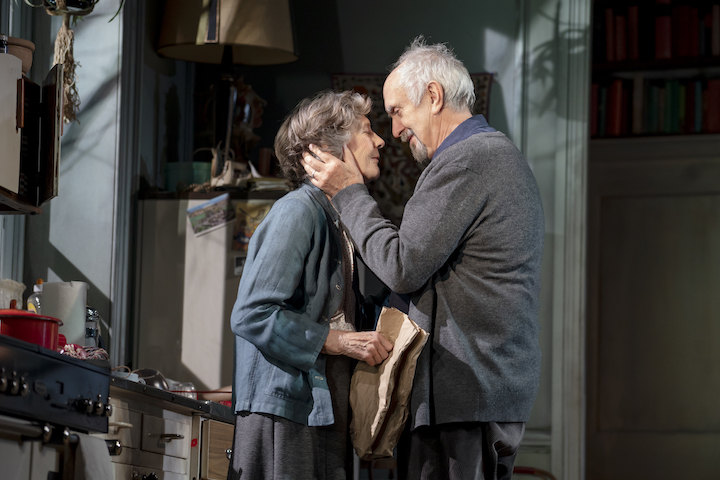 (l to r) Eileen Atkins and Jonathan Price in ‘The Height of the Storm.’ (Photo: Joan Marcus)

This tempest is very familiar to us. Some of us are frightened and overwhelmed watching and grasping for plans and decisions about a parent, grandparent or partner. Some of us find ourselves in the eye of the winds of dementia ourselves. The Height of the Storm is Florian Zeller’s (The Father, Samuel J. Friedman Theatre, The Mother, Atlantic Theater Company) third play to hit New York City in translation focusing on aging, dementia and family.

Zeller’s four plays, The Father, The Mother, and The Son and The Height of the Storm are all nestled deeply in family and mental illness and the effects they have on each other. In The Height of the Storm, we land in the middle of a family in crisis. André (Jonathan Pryce) and Madeleine (Eileen Atkins) are getting on in years and living in the French countryside. Their daughters, Anne (Amanda Drew) and Élise (Lisa O’Hare), visit for the weekend. A somewhat mysterious Woman (Lucy Cohu) also arrives. Élise’s boyfriend (James Hillier) comes to retrieve her. Or, perhaps, none of that happens. It may also be likely that André or Madeleine is dead, maybe both. The daughters’ presence, as well as the others also come into question.

And therein lies one of the struggles that could’ve been blessings in this production. Trying to decipher who is alive or dead, what scenes are actually happening, and what scenes or bits of scenes are memory or delusions of André’s deteriorating mind besiege the audience’s attention. Instead of diving into the unstructured consciousness of mental illness and the fear and nostalgia of a family dealing with it, The Height of the Storm becomes anxiety-inducing by way of plot instead of connection and compassion.

With no tether to our hearts or sculpting and only repeats of stale characters, so much that could be meaningful plays as rote and bland. We never get to know these actual characters and their struggles because we are kept at arm’s length by the story structure and incongruously cold and realistic dialog. 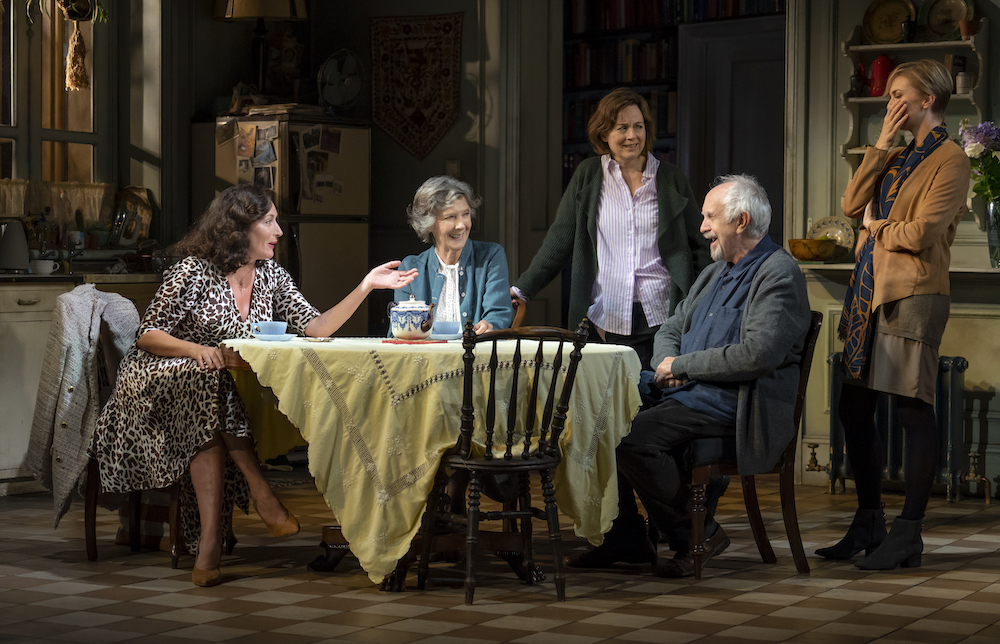 Johnathan Pryce throws every fiber of his being into André within the confines of what’s on the page. In many ways, this character feels like a slice of his gripping performance in The Wife, simply dropped in a different place and moment. As Madeleine, the clear, compassionate captain of this family, Eileen Atkins is subtle and authoritative but aloof. The two powerhouse performances rise above the material.

The rest of the six-person cast, however, can’t find their footing. Drew’s Anne lives in a world of banal awkwardness with fits of melodramatic breakdowns that jar and confuse, while O’Hare’s Élise and Cohu’s Woman/Mrs. Schwartz feels like pieces of furniture, not out of place particularly, but forgettable. It is Hillier’s portrayal of Man/Paul that stands out in a very confusing way. He gives a decidedly pointed robotic performance. With little to say and a lot of unexplained time on stage, he seems almost mime-like, exaggerated but inconsequential.

Painstakingly detailed and realistic, Anthony Ward’s towering set mirrors the obstacles facing this family, rooted in the every day while overwhelming and frightening. To find the missing piece in this production is to look not only at Zeller’s script but at both Christopher Hampton’s translation and Jonathan Kent’s direction. Both seem to work in tandem to remove almost all shreds of heart that could be on the stage. Hampton’s verbiage is plentiful but reads more like a maze to figure out than a story to be told of any kind of life.

The Height of the Storm benefits significantly from its two leading performances. But the plot mysteries are too heavy and connections too light to speak with gravity on a topic touching so many lives.