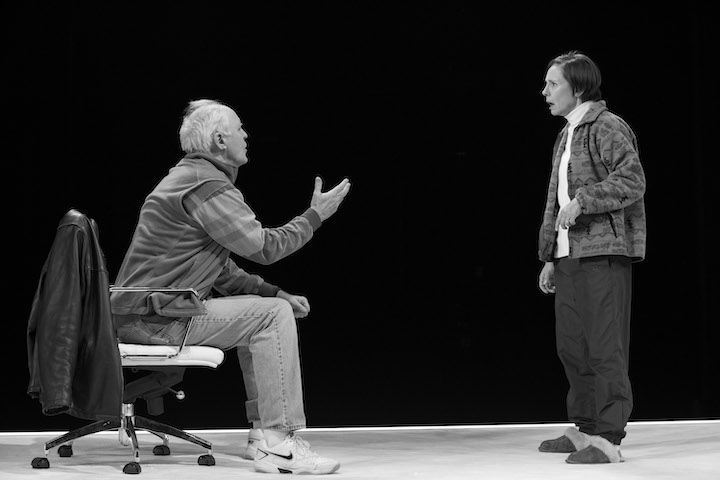 That’s playwright Lucas Hnath’s message regarding the instinct to play for familiarity in his new work, Hillary and Clinton. He encourages his actors to “play the text and not the persona.” Job well done by this first-rate ensemble on that account. The only problem — like the Clinton clan — there’s so much baggage that you can’t help feel weighted down by reality versus the alternative universe he’s created.

Hnath whisks us away to a hotel room (neutrally interpreted by scenic designer Chloe Lamford as a fluorescent light-framed white box with minimal furniture). It’s January 2008 and the Democratic primary is kicking into gear. Hillary (Laurie Metcalf), mystified after coming in third in the Iowa caucus, attempts to maneuver a rebound with campaign strategist Mark (meant to be Mark Penn, played by a slovenly and somewhat acrid Zak Orth). Though she’d like to resist, Hillary reaches out to husband and former president Bill (John Lithgow). Upon his arrival, the real power play begins. 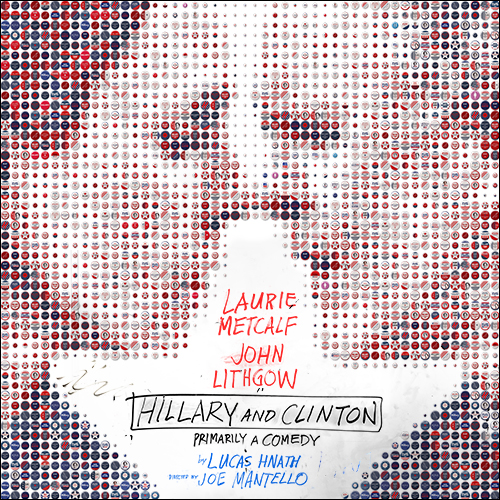 Most (unless one has been dragged to the play as an apprehensive guest by an “In to Win” fan) will likely watch Hnath’s play through Hillary-tinted glasses. Even those with modest political interests will recall her slow and steady tumble from frontrunner to maybe next time. It’s not Hnath’s regurgitation of the primary’s touchpoints that engage, but rather, the psychological and societal exploration of how we, as a country, view women in power.

Metcalf, Tony Award winner for Hnath’s A Doll’s House, Part 2, proves herself once again as a formidable presence, relishing Hnath’s sharply shifting dialogue that repeatedly circles back to the theme of feelings — or the perceived lack thereof when it comes to Hillary. “Feelings are a terrible reason for doing anything — there’s too much doing because of feelings,” she says early on, later pontificating about the public’s response to her husband’s infidelity, commenting, “Everyone seemed to have something to say about how I reacted… about how the feelings I was expressing weren’t real feelings — It was as if the way I was feeling it wasn’t how other people thought I should feel.”

Not so ironically, a rare crack in the armor at a primary event in which Hillary almost shed a tear boosts her numbers to win the New Hampshire primary. Voters wanted to see her as human. Or what they considered to be human. But as much as she rallied, Barack (here portrayed without the real president’s unique vocal cadence but with equal charisma and warmth by Peter Francis James) possessed the unbeatable “it” factor.

As did her husband, even though it wasn’t his election to win. Bill’s controversial campaign financing caused another pothole on Hillary’s road to the White House, but as he glibly tells Barack, “Just about any money — if you look at it from the wrong angle — can look bad.”

Director Joe Mantello keeps the action moving at a brisk pace, but the real the winner here is Metcalf, who deftly navigates Broadway Hillary with precise timing, judicious physicality, intellectual prowess, and — yes — feeling. Had the real-life candidate been able to concoct such a magic recipe, this play would have never been written. Bad for Broadway, but better for the country? We’ll never know. At least in this universe.

Matthew Wexler is The Broadway Blog’s editor and chief critic. Read more of his theater writing at wexlerwrites.com.