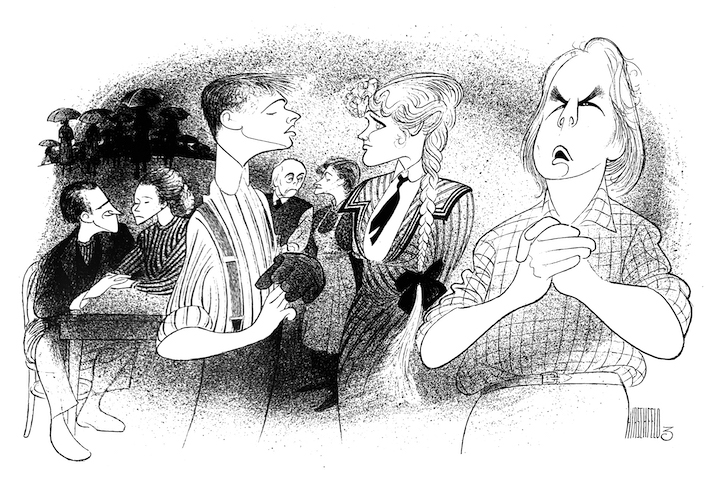 The 1988 production of ‘Our Town.’ (Image provided by the Al Hirschfeld Foundation.)

No other artist captured the world of theater as uniquely and whimsically as Al Hirschfeld. Now fans have a chance to view even more of the legendary illustrator’s work in the new online exhibition, “It Goes So Fast: Our Town by Hirschfeld.” Now live at AlHirschfeldFoundation.org/exhibitions through May 15, the exhibition features Hirschfeld’s reflections of the legendary Thornton Wilder drama featuring artists including Frances Conroy, Henry Fonda, Spalding Gray, Helen Hayes, Penelope Ann Miller, Paul Newman, Eva Marie Saint, Frank Sinatra, Eric Stoltz and more.

“It Goes So Fast: Our Town by Hirschfeld” is guest-curated by Howard Sherman, in conjunction with the publication of his book, Another Day’s Begun: Thornton Wilder’s Our Town in the 21st Century. This is the first exhibition from the Al Hirschfeld Foundation concentrated on a single play. Through Hirschfeld’s pen, we see how Wilder’s landmark drama resonated with both audiences and performers over eight decades. Hirschfeld drew Our Town productions on stage, on television, and even a musical version. Howard Sherman brings many of these productions to life in his engaging commentary throughout the exhibition. 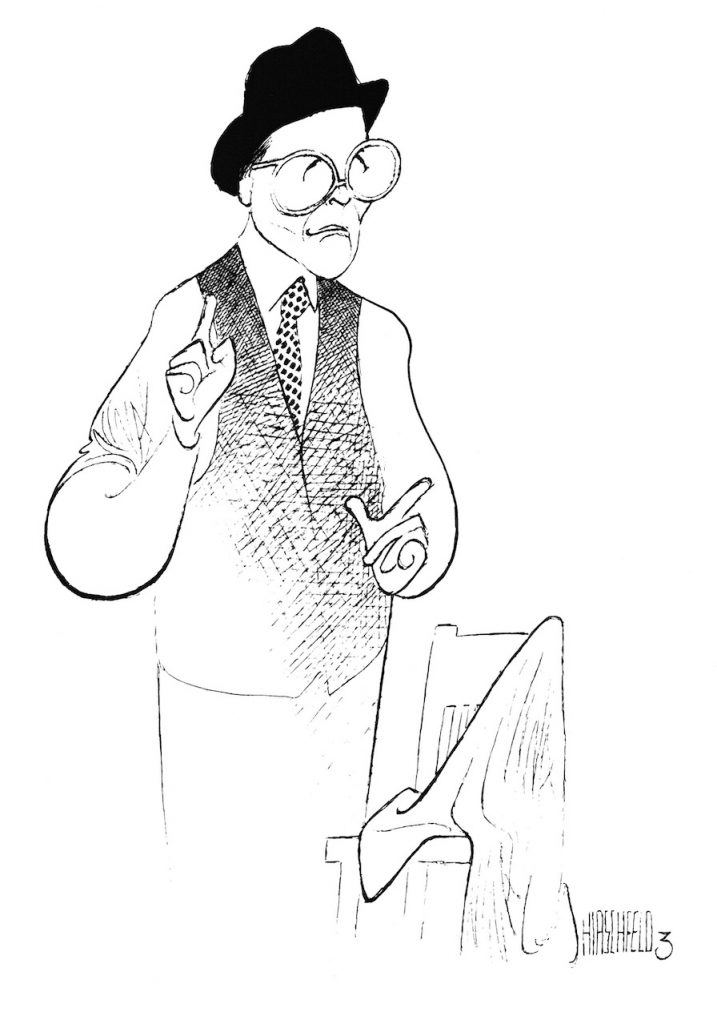 Paul Newman in the 2002 revival of ‘Our Town.’ (Photo provided by the Al Hirschfeld Foundation.)

“Given the breadth of his career, it’s no surprise that Al Hirschfeld had occasion to draw actors from productions of Our Town, in light of the enduring popularity of Thornton Wilder’s play,” says Howard Sherman. “In only 10 drawings, Hirschfeld managed to commemorate all four productions that have played on Broadway to date, ranging from the original in 1938 to the most recent revival in 2002. He also captured all of the men who played the Stage Manager on Broadway, an estimable quartet made up of Frank Craven, Henry Fonda, Spalding Gray, and Paul Newman, as well as various other members of the companies.”

“Howard’s book shows how Our Town, like Hirschfeld’s drawing, continues to engage audiences long after it was first created,” says David Leopold, Creative Director of The Al Hirschfeld Foundation. “The Al Hirschfeld Foundation appreciates what Howard Sherman does in his book. He takes something we all know and sees it in a fresh light. That is a hallmark of Hirschfeld’s work, and one could say Thornton Wilder’s as well. Of course, Our Town uses simplicity to make its point, which again echoes Hirschfeld.”

Go behind the lines of Hirschfeld’s art with “The Hirschfeld Century Podcast,” nominated as “Best NYC podcast” by the 2020 Apple Awards.  A special episode featuring Howard Sherman, guest-curator of “It Goes So Fast: Our Town by Hirschfeld” and author of Another Day’s Begun: Thornton Wilder’s Our Town in the 21st Century, will be available starting April 5, 2021, from  AlHirschfeldFoundation.org/podcasts, iTunes and other podcast sites.