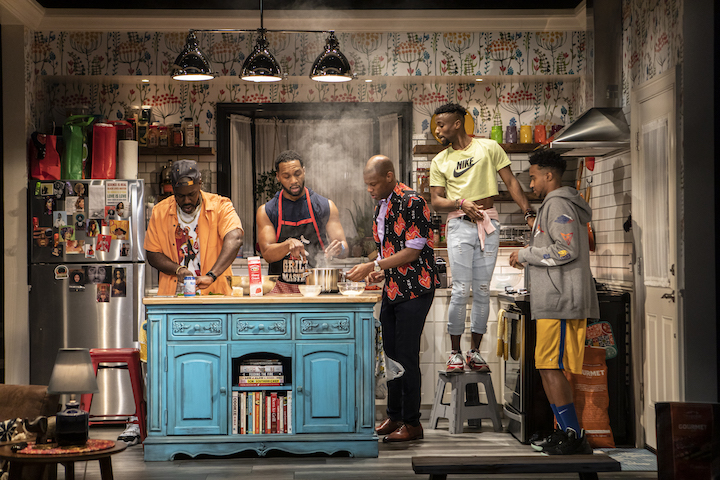 The cast of ‘The Hot Wing King.’ (Photo: Monique Carboni)

Katori Hall was recently asked how she wrote her recent play, about a group of gay black men in Memphis, Tennessee. Her response was simple and profound. “I’m a human being. That’s how I did it.” The work in reference is The Hot Wing King, Hall’s excellent world premiere, which opened Off-Broadway tonight at Signature Theatre.

The story follows the New Wing Order, a tight-knit group of friends and lovers on the eve of a hot wing competition. Cordell (Touissant Jeanlouis) keeps a close watch on his kitchen. At the same time, his boyfriend Dwayne (Korey Jackson), Big Charles (Nico Annan), and Isom (Sheldon Best ) form an assembly line to create what is sure to be the prize-winning wing: Cajun alfredo with bourbon-infused crumbled bacon.

While the recipe provides the backdrop for Hall’s comedic drama (pro-tip: don’t see this show on an empty stomach because these gents are actually cooking onstage), there is much more boiling in the pot than wings. Hall’s human touch is the secret ingredient that makes this play so delicious.

Hall was inspired to write what she calls a “love letter” based on the 12-year relationship between her brother and his partner. She had seen the ups and downs that they’ve experienced and was also aware that few theater stories have focused on or celebrated the lives of gay, black men. 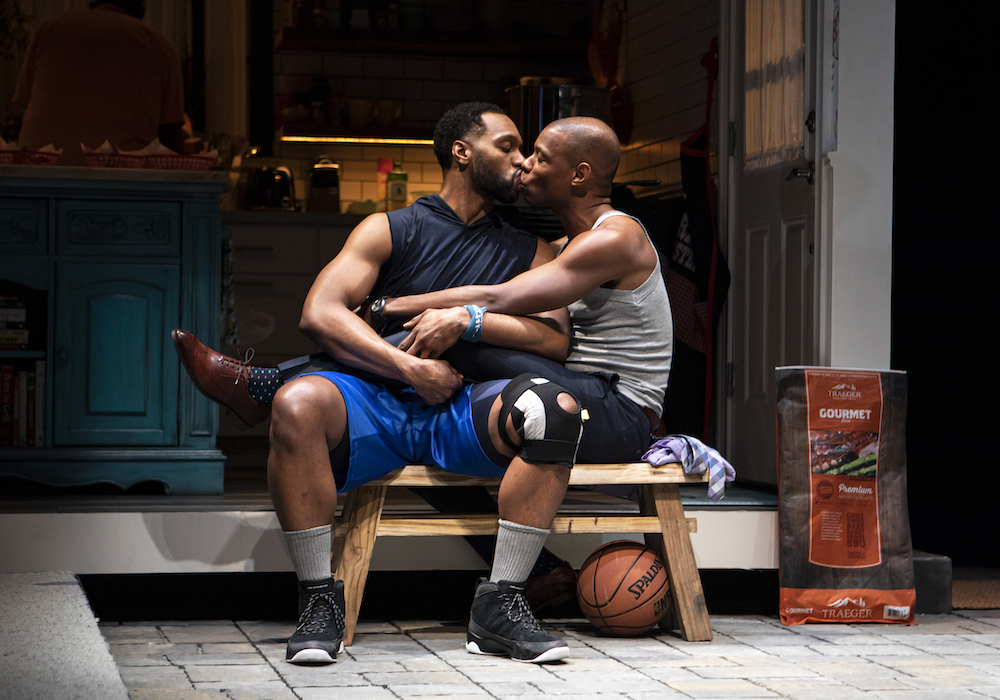 On the surface, her work is akin to that of a quality sitcom. Yet this smart playwright has much to say. In doing so, she wisely avoids the pitfalls of didactic writing and proselytizing that often befalls other writers. She addresses issues of community, police brutality, fatherhood and sexuality in a way that is seamless, touching, and often hilarious.

Director Steve H. Broadnax III fully realizes Hall’s work with a sharp cast that is finely tuned to each other. Jeanlouis and Jackson make an incredibly sexy couple and deliver the material with sheer authenticity, never overly dramatic nor excessively sentimental.

Best is also a stand-out as the stereotypical, but enormously entertaining flamboyant gay friend fixated on designer labels.

Back to the food: On Fridays and Saturdays during the run of The Hot Wing King, audiences can pre-order Memphis-style wings for pick-up at the snack bar. Eat 20 of them and get your picture displayed in the lobby.

As it turns out, the real winners of The Hot Wing King are neither the cooking contestants nor the consumers of actual wings. Hall’s messages of second chances and redemption are deeply encouraging for anyone who has ever felt less than adequate in the game of life. The crown belongs to everyone who scores a ticket to this sumptuous play.