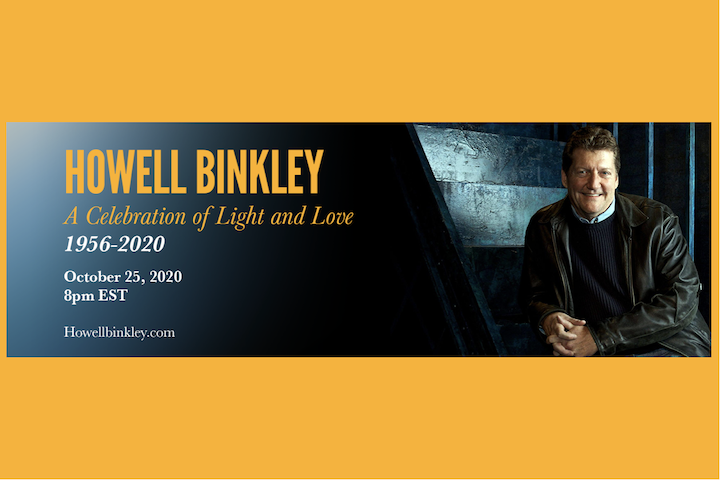 Parsons Dance and Friends and Family of Howell Binkley have announced that Howell Binkley: A Celebration of Light and Love, a video tribute in memory of lighting designer Howell Binkley created by Suspension Productions, will be available for viewing on howellbinkley.com beginning Sunday, October 25 at 8 p.m. ET.

The 60-minute tribute, honoring Binkley’s award-winning career, beginning in 1978 until his death on August 14, 2020, features dance and Broadway luminaries discussing his impact on their lives and their professional communities.

Binkley designed the lighting for an astounding 52 Broadway shows. He received nine Tony Award nominations and won two Tony Awards (Hamilton, Jersey Boys). His immense success in theatrical lighting is explored throughout A Celebration of Light and Love by those who worked with him and cherished his friendship. Among these are Broadway and West End producers Cameron Macintosh, Jeffrey Seller, and Richard Winkler; directors Thomas Kail and Des McAnuff; choreographers David Parsons and Sergio Trujillo; actors Ariana DeBose, Chita Rivera and Paul Nolan; and creators Bob Gaudio and Lin-Manuel Miranda. Joining them and others in remembrances of this remarkably talented man are his former assistants, his family, and his friends.

Binkley began his career with the Paul Taylor Dance Company, where he met choreographer David Parsons, then a dancer with the company. “It was an incredible journey, Howell Binkley and I had together,” says Parsons. “I was there to learn from Paul, and he was there to learn from lighting designer Jennifer Tipton. Over the next four decades, we traveled the world, worked extremely hard, and truly experienced the wonders of life.” Binkley and Parsons co-founded Parsons Dance in 1985, and, as its resident lighting designer, Binkley went on to light more than 70 pieces for the company.

Binkley once acknowledged that lighting dance helped him develop the skills necessary for lighting theater. “In dance, you are sculpting the body from all sides in order to give definition to the body as it turns, as it’s lifted, as it rolls on the ground,” he said. “I try in my lighting of plays and musicals to use that same carving tool.” His expertise in using this tool was acknowledged by revered Broadway community members, including director Des McAnuff (Ain’t Too Proud, Jersey Boys), with whom Binkley worked on over thirty productions. Lin-Manuel Miranda, who worked with him on In The Heights and later on Hamilton, for which Binkley received the 2016 Tony Award, stated in tribute to his passing, “Thank you for sculpting in light and elevating every moment you touched.” Appropriately so, A Celebration of Light and Love captures the elevating moments in the life of this gifted man.

Here’s a look at some of Binkley’s work:

Javier Muñoz and the cast of ‘Hamilton.’ (Photo: Joan Marcus via The Broadway Blog.) Ariana DeBose and the company of ‘Summer.’ (Photo: Joan Marcus)