Top Posts
‘Company’ to Hit the Road on North American...
Meet the Full Cast of ‘Shucked,’ Coming to...
Full Cast for ‘Parade’ Announced
Stephen McKinley Henderson Gives the Performance of His...
The McKittrick Hotel Announces the Return of ‘The...
Broadway Stars Honored with Academy Award Nominations
Taylor Trensch, Danny Wolohan, and More Join the...
A Gay Road Trip Comes to The Brick...
Maude Apatow of ‘Euphoria’ is the Next Audrey...
Tony Award Winners to Star in ‘Hercules’ at...
Home Beyond Broadway What a Not-So-Wonderful World: 2 Plays Put Human Rights Issues in the Spotlight
Beyond BroadwayReviews As the scent of roasting turkeys and marshmallow-topped sweet potato casseroles waft through our homes, many of us will sit around the Thanksgiving table, teary-eyed and grateful for the loved ones in our lives and all that is good in the world. But take one look at the headlines, and it may be hard to swallow such gratitude.

This week a federal trial pits attorneys for Kentucky’s Republican Governor Matt Bevin attempting to ban second-trimester abortions against those representing EMW Clinic (the last abortion clinic left in the state.) Overseas, Russia continues to see an increase in anti-LGBTQ violence and rhetoric. A recent report by NBC News revealed that “two-thirds of Russians believe gays are conspiring to subvert the country’s traditional values.”

Two theater companies — one in Chicago and the other in New York City — have stepped into the fire of these hot topics, producing timely and disturbing works that are a fry cry from your typical holiday fare.

In The Canyon, Jackalope Theatre Company
Jackalope Theatre Company, now celebrating its 11th season, continues to push boundaries in its mission to “expand the American Identity by engaging with our communities to produce works that celebrate diverse perspectives.” That narrative begins from the moment one walks into their home at Broadway Armory Park.

The venue is the Chicago Park District’s largest recreational facility, officially purchased in 1998 after it was no longer of use to the National Guard. In addition to the theatre, you’ll find the Abbott Fund Wellness Center, the Trapeze School of NY in Chicago, a gymnastics center, and ongoing cultural and community programming. It’s through this lens that makes In the Canyon, a dystopian exploration of what happens when we abolish women’s reproductive rights all the more powerful. Playwright Calamity West smartly places the action over a period of 60 years, beginning in 2007 as a young couple (Liz Sharpe and Andrew Burden Swanson) deal with the emotional, financial, and societal ramifications of an unwanted pregnancy. Characters loosely connect from one decade to the next as we witness the slow, steady decline of women’s rights, culminating in the arrest and incarceration those who have had an abortion. In its final scene, In the Canyon, almost feels like a Mad Max-styled spaghetti western, complete with a carton of Marlboro Reds and final shootout.

Director Elly Green utilizes a multicultural cast of eight actors, each portraying various roles throughout the play’s five parts. Scenic designer William Boles’ grim set has a transformative quality thanks to a shifting palette by lighting designer John Kelly. The oppressive space, with its dirty walls and low ceiling, effectively boxes in the action, and in its final incarnation, gives hope that a world worth living in exists beyond its four walls.

In spite of its pit-in-your-stomach foreshadowing of what the world might look like if Roe v. Wade was ever appealed, Jackalope’s artistic director Gus Menary considers the play a call to action in “an all too foreseeable future in a country that legislates women’s bodies, denies our citizens votes, and distorts our realities.”

Jackalope represents a robust part of Chicago’s Off-Loop theater scene, mostly comprised of non-union theater companies that take over storefronts, warehouses, and community spaces to create provocative works such as In the Canyon. Mayor Rahm Emanual has dubbed 2019 as The Year of Chicago Theatre. The branding campaign hopes to increase visibility, and with works like this, it will also illuminate stories and issues that are at the forefront of our public conscience. Lured, Theater for the New City
Playwright Frank J. Avella wrote Lured in response to human rights violations against the LGBTQ community in Russia (he states that the play is based on true accounts) and around the world. There have been harrowing reports of men and women fleeing Chechnya’s purge, and even on home soil, the increase in violence against the LGBTQ community — especially transgender individuals — is chilling.

Mr. Avella’s play takes place in 2014 St. Petersburg throughout three scenes that portray the entrapment and torture of a young gay man and the subsequent outcome of his attackers. Co-directed by Mr. Avella and Carlotta Brentan (who also appears in a minor role), Lured faces an almost insurmountable challenge of trying to maintain a high level of intensity through a series of beatings, tortures, and rapes. The audience is exposed to all of this in an appropriately dilapidated apartment designed by Steven Medina, but the overwhelming amount of violence actually diminishes its impact. Instead of empowering the audience to imagine the horrific torture bestowed upon Sergei (a serviceable Kalen J. Hall) and Dmitry (a compelling and desperate John Dimino) by placing some of this action offstage, we’re forced to sit through multiple rapes and a literal bloodbath. The effect becomes desensitizing rather than impactful.

What does land like a sucker punch (there are plenty of those, too) is the grotesque and all-too-real vitriol spewed by anti-LGBTQ Occupy Pedophilia leader Tatiana (a terrifically bone-chilling Cali Gilman), who describes homosexuals as “unstable animals that dwell in debauchery and bring damnation on us all.” And if you think that’s Putin speak, think again. “No,” she responds, “this I learned from American Evangelical Conference in Florida, United States on YouTube.”

Lured may be heavy-handed, but its straight-from-the-headlines message is one that deserves to be heard. And thanks to spot-on dialect coaching by Dayle Towarnicky, this ensemble of young actors delivers a portrayal of modern-day Russia that hits close to home in spite of its far-off locale.

Lured will then travel to Europe to be featured in the OnStage! American Theater Festival in Rome, Italy, in January 2019. 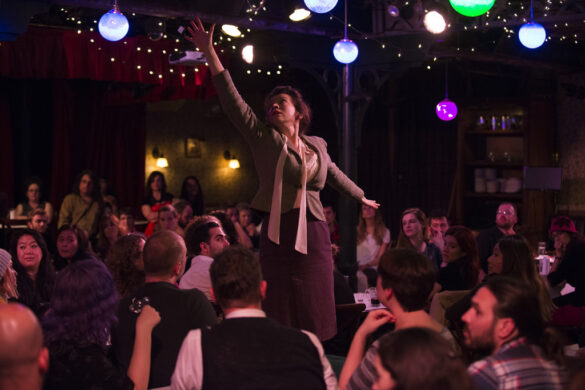