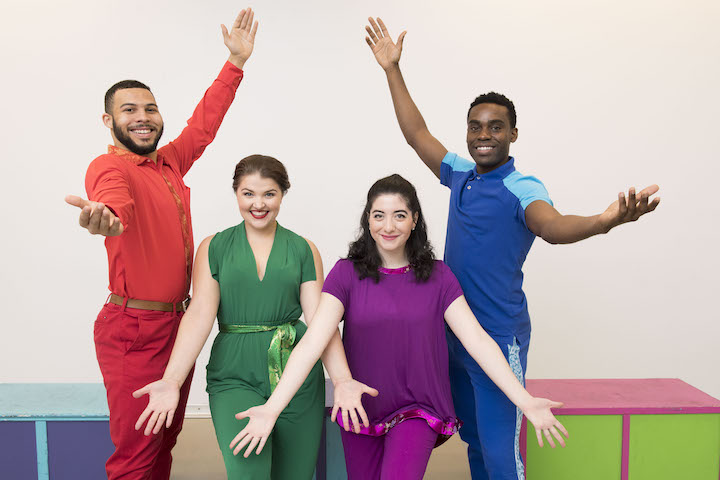 The cast of ‘All Kinds of People.’ (Photo: Inside Broadway)

Celebrating its 40th anniversary season in 2022, Inside Broadway announces the return of its professional touring production this year – the first time since COVID-19, bringing classic Broadway musicals directly into New York City school’s auditorium to give the students, teachers, and staff a fun, educational, and safe live theatre experience.

The 45-minute productions are designed to fit into a class period and connect to the curriculum. Inside Broadway’s shows are created by theater professionals and utilize professional actors of Actors’ Equity Association and live musicians who are members of Local 802. Inside Broadway is working directly with each NYC public school on following all COVID-19 protocols per NYC Guidelines.

“We are thrilled to mark our 40th anniversary in 2022 and continue to be committed to producing Broadway’s classic musicals in a contemporary format for young audiences in New York City, many of whom have never seen or attended a Broadway show,” said Michael Presser, Executive Director of Inside Broadway. “It’s important now more than ever to have our kids back in school and we commend the Mayor and Governor to their commitment to keeping schools open and their understanding of the importance and impact of in-person learning. Over the past four decades, we have created individual workshops, residencies, and performances at hundreds of public schools throughout the five boroughs, reaching nearly three million students who may not have access to live entertainment and introducing them to the magic of Broadway, ultimately passing down the rich legacy of America’s musical theatre to future generations.”

The cast includes Brian Klimowski as George M. Cohan, who has appeared in West Side Story and Cabaret; Paola Robles-Vazquez as Mary, who has been in Bring It On: The Musical and Pippin; as well as Gabriella Green and Nick Manna. The Creative Team includes Director & Writer Marc Tumminelli, who is also Founder and Director of Broadway Workshop and Host of Little Me: Growing Up Broadway Podcast; Music Director Robbie Torres; Choreographer Danielle Marie Gonzalez of Rock of Ages; Costume Design Karl Ruckdeschel; Scenic Designer Carl Tallent; Production Stage Manager Emily Huber; COVID-19 Safety Manager Bri Kolozsvary; Associate Producer & Company Manager Nicholas Sala of Inside Broadway.

In MY TOWN, Mary is a 13-year-old eighth-grader on her class field trip to New York City. When Mary’s classmates leave her behind in Times Square, the famed statue of George M. Cohan comes to life to take her on a magical tour of New York City. Mary and George entertain the tourists of Times Square before heading to the Lower East Side, Battery Park and 42nd Street. The pair meet interesting people along the way, including tourists, shop keepers, an Instagram star, and her photographer. Mary learns about the history of New York and the life and career of George M. Cohan while finding inspiration to write her own story.

Before COVID-19, the most recent Inside Broadway tour production was Oscar Hammerstein II’s All Kinds of People, which focused on the theme of tolerance and ran from January to March 2020. Throughout the remainder of 2020 and 2021, Inside Broadway created online YouTube videos and virtual challenges featuring Broadway performers and industry specialists for NYC public school kids.