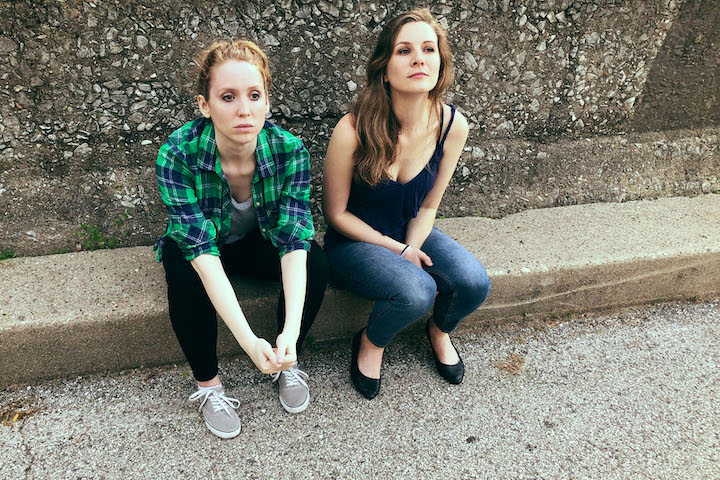 Grace (Laura Berner Taylor) and Lorna (Sarah Gise) are childhood friends from a small, dull, English town. Both girls are smart, but one is beautiful. Both girls have family troubles, but one family has more resources. They go through girlhood and adolescence with many of the same hopes and dreams; do well in school, get out of their small town, head to London and see the world. But when plain Grace’s life takes a hard turn, it’s what pulls the friends apart rather than keeps them together that propels the drama forward. In spite of its breakneck pace and non-linear storytelling, Elinor Cook’s decade-spanning Out of Love dives into the women’s friendship with an emotional fervor that’s hard to resist.

Cook’s writing is lyrical and understated but also captures the rhythms of how women talk to each other. Taylor, in particular, has incisive comedic timing and adds ironic levity to the friends’ conversations. A third actor, Peter Gertas, plays all the men in the friends’ lives from step-dads, brothers, and lovers to school friends, but the whiplash transitions from, for example, an emotionally manipulative step-father to a nare-do-well high school lothario, don’t offer enough breathing room for the audience to recalibrate in between scenes.

These quick transitions are effective in relation to the cause and effect in the women’s lives. The pair delivers a solid smackdown of emotional whiplash, making it all the more difficult for the audience to stay present when asked to switch tone, time and allegiance. I longed for scenes to last just a minute longer, thereby enabling the actors to fully realize the dramatic shifts. But at a lean 80 minutes, the production propels forward without a wasted breath.

Sotirios Lavaditis’ expressionistic set, with its white curves and flats set at various, off-kilter angles, supports the lightening-fast changes in scene and mood. Under Georgette Verdin’s direction, Taylor and Gise both deliver strong, fluid, vulnerable performances, bringing character and empathy to their roles while keeping inside the socioeconomic, gender and attractive-privilege framework.

Another strong production from Interrobang Theatre Project, Out of Love reminds theatergoers why the company won the 2019 Broadway in Chicago Emerging Theatre Award and continues to raise the bar in their tenth-anniversary season.