The Broadway Blog’s editor Matthew Wexler sits down with Jerick Hoffer (aka Jinkx Monsoon) to discuss Darkwing Duck, RuPaul’s Drag Race, and what’s next for this rising star.

Jinkx Monsoon, winner of RuPaul’s Drag Race season five, has blown into New York City with the power of a superstorm. But instead of mass destruction, this alter ego of actor Jerick Hoffer arrives at the epicenter of an effervescent cabaret act called The Vaudevillians co-starring Major Scales (aka Richard Andriessen).

The Broaday Blog caught up with Hoffer in the lobby of the Out Hotel before another two-performance evening at the Laurie Beechman Theatre, where we talked about his creative inspiration and what’s ahead for this diva-in-the-making.

Hoffer has spoken openly about the challenges of growing up in Portland, Oregon with a young mother and turning to movies and television as an escape. One of his earliest inspirations was Darkwing Duck, a syndicated cartoon by Disney that Hoffer describes as “a crime fighting duck with a witch girlfriend (Morgana McCawber) — a duck version of Elvira. God, how I loved that duck lady.”

Later inspired by the real Elvira and Morticia Addams, Hoffer would run home from school and don a red afghan and saw his first glimpses of drag on daytime talk shows like The Ricki Lake Show and The Sally Jessy Raphael Show. And there was no turning back.

While studying theater at Cornish College of the Arts, Hoffer put drag on the back burner and instead concentrated on the core curriculum of Shakespeare, musical theater and Commedia dell’arte. When summer came, he’d be back in lipstick and leggings to earn a living. Upon graduation, Hoffer stayed in Seattle and continued to cultivate his drag persona of Jinkx Monsoon, but it was only this past season that he felt ready to audition.

“If you thought they were giving me a hard time then about styling and grooming, you should have seen me the year before,” says Hoffer. “I always wanted to focus on the performative aspects. My character was decidedly tacky and disheveled and I was 100 percent committed to telling it that way. RuPaul taught me that I can still be true to that but be the most glamorous version of tacky.

While Hoffer’s friends thought he could win, he wasn’t convinced that a comedy actor could take the title, so he entered the competition with the goal of making the top five, focusing on individual challenges. He had accomplished what he had set out to do, having had the opportunity to sing and act on the show and portraying one of his favorite characters, Little Edie from Grey Gardens. Then he met his drag muse Dave, a U.S. military veteran living with HIV, for the “Super Troopers” episode.

One of the most compelling episodes of the season, it was obvious that something shifted in Hoffer during this episode as he and Dave created a draglicious spectacle that honored and embraced the pair’s new found friendship.

“I was raised to be nice to people. A lot of people in my family suffered with various illnesses and I was taught to be respectful to older people and put that before selfish needs,” says with no pretense. “Growing up in Portland, I spent my teen years at a youth recreation center and met a lot of people with HIV/AIDS. It was easy to have that interaction [with Dave]. It wasn’t about overcoming the obstacles. To try to force him or make him do something beyond his capabilities didn’t make sense. He’s done so much in his lifetime for the gay rights movement. He’s been around for a while – everything you can think of, he’s been through.” And with that in mind, Jinkx Monsoon was going to settle for nothing less than the crown.

Tune in tomorrow for Hoffer’s inspiration to create The Vaudevillians, a rollicking cabaret act currently playing to sold-out houses at the Laurie Beechman Theatre in New York City. 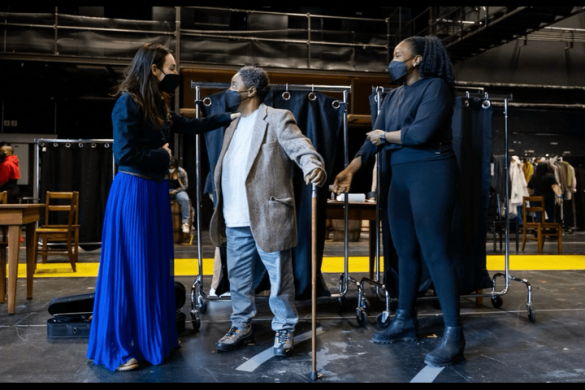