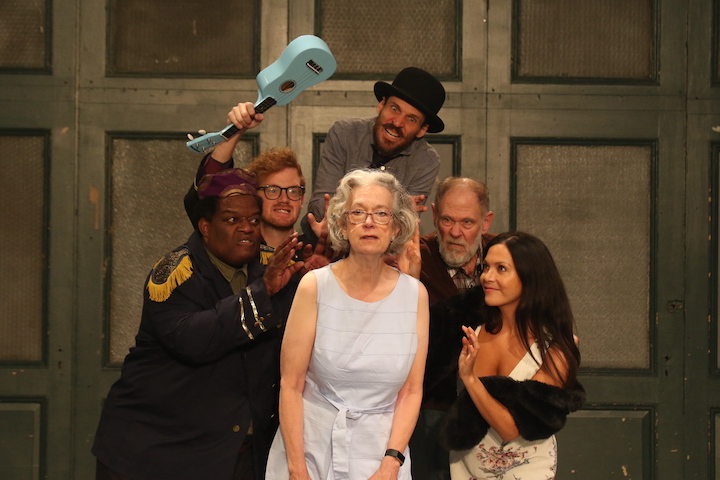 Vicky Gilmore (center) and the cast of Irondale’s ‘alice…Alice…ALICE!’ (Photo provided by The PR Social)

Tucked away around the back of Fort Greene’s uber-welcoming Lafayette Church, the Irondale Center for Theater, Education and Outreach has since 2008 presented risk-taking plays in their ample 3,700-square-feet of performance space, surrounded on three sides by high balconies. It’s an ideal setting for the restaging of their 2010 absurdist Alice in Wonderland redux, alice…Alice…ALICE!.

As a child in the ‘70s, I attended a thoroughly enjoyable immersive theater presentation of the then quite avant-garde play, Jesus Christ, Superstar. It was performed in one of that era’s ubiquitous roller rinks, with berobed cast members on skates, the audience following them from one area to another as the action unfolded. It was transforming!

Although Irondale’s production of alice…Alice…ALICE! was patterned on this same immersive model (minus the skates), it is markedly less enjoyable. The play is unnecessarily confusing and peripatetic, dragging an audience replete with senior citizens up and down the theatre’s many flights of steps in the near-dark. It’s an insurance nightmare waiting to happen.

Always one to celebrate something new and exciting, I wanted to give this show the benefit of my doubt. But there are too many missteps to ignore. One big confusion comes in the form of their gray-haired Alice, Vicky Gilmore. Age-blind casting should be championed (consider the brilliant Dance Nation by Clare Barron), but there seems no rational reason to have such a veteran Alice, and it’s never explained, leaving her to look like a doddering dementia patient, compounded by the fact that Alice doesn’t seem to know her lines.

I honestly wondered if, right before curtain, she switched roles with Rivka Rivera, the beautiful 20-something woman who plays the Dormouse, who also didn’t seem to know her lines. Although there were a few actorly standouts in the production—including Irondale co-founder Terry Greiss and the mustachioed Joey Collins—the collective muddling through was disheartening to witness.

The company of Irondale’s ‘alice…Alice…ALICE!’ (Photo provided by The PR Social)

There are clever bits of inventive stage magic, as when Alice grows or shrinks during the “Drink Me” and “Eat Me” segments, and stagehands swap out a tiny door for a full-size facsimile. But they are too few and far between. By the time we tramped down yet another flight of stairs to stand around (because not enough chairs) and watch the beer-swilling ‘tea party’ scene, I wanted nothing more than to grab one of the set-piece beers and swill it down.

The best bits of the action happen when the actors pick up ukuleles and play a spot of music, like The Ramones “I Wanna Be Your Boyfriend.” But while Cheshire Cat Michael-David Gordon sings well and plays a mean ukulele, he isn’t as great at climbing stairs and was sweating so hard at several points in the production he looked like he might collapse. Maybe five roles are too many for one man to play.

The press release describes the show as “part naivety for children of all ages, part political farce and sophisticated social contemporary, the evening-length work is seasoned with pure silliness, and a serious message, examining the problems of the world through the lens of a fast-past chase in an upside world of mayhem and madness.” But this audience member could not discern any social message or political farce examining any world problems, apart from the “Stalinesque show trial in a haunting tableau spotlighting a hooded, helpless defendant,” as described by director Jim Niesen. Instead, all that comes through is ample mayhem and madness.

One problematic scene is set in the lobby as a confused old man has an “accident,” then emerges from the toilets with his shirttail tucked through his flies. When Gordon gets on his knees and paws to fix the scrap of shirt, the Rubicon has been crossed. Moments later, when the old white man smacked the Black man in the face three times, that was a bridge too far. I don’t care what kind of restaging it is: if there’s a scene where a white person assaults a person of color, that shit needs to be rewritten. C’mon, people. Black Lives Matter.

I should also remark that the lobby scene requires the entire audience and actors to gather into much too small a space for pandemic safety. Although everyone’s being vaccinated, it was a risk I was uneager to take. Not to mention the full band crammed into the Ladies Room, rendering it unusable despite my urgent need to jettison my pre-show cocktail. Talk about torture upon torture.

Still, every successful Sleep No More must begin somewhere, and perhaps we are witnessing the ground floor of a future McKittrick Hotel classic. I, for one, certainly hope the show improves over time. Those who remain undaunted may be interested in attending Irondale’s special Halloween performance, which begins at 11:55 p.m. on October 31.