Top Posts
‘Company’ to Hit the Road on North American...
Meet the Full Cast of ‘Shucked,’ Coming to...
Full Cast for ‘Parade’ Announced
Stephen McKinley Henderson Gives the Performance of His...
The McKittrick Hotel Announces the Return of ‘The...
Broadway Stars Honored with Academy Award Nominations
Taylor Trensch, Danny Wolohan, and More Join the...
A Gay Road Trip Comes to The Brick...
Maude Apatow of ‘Euphoria’ is the Next Audrey...
Tony Award Winners to Star in ‘Hercules’ at...
Home Beyond Broadway Review: ‘Is This A Room’? Better Question, Is This A Play?
Beyond BroadwayReviews 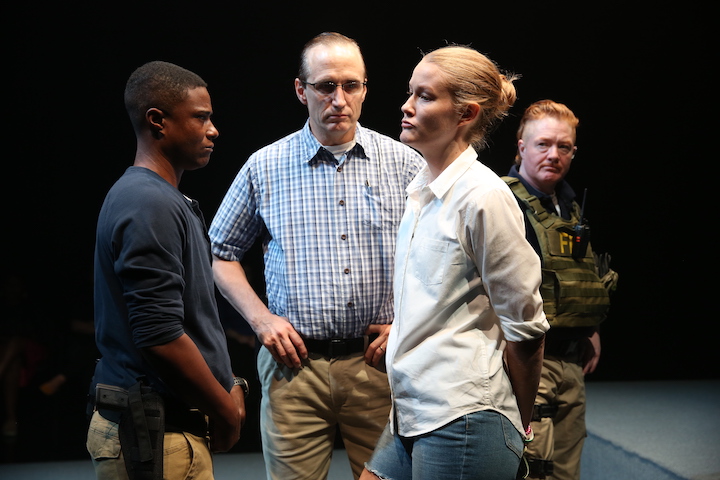 (l to r) TL Thompson, Peter Simpson, Emily Davis and Becca Blackwell in ‘Is This A Room.’
(Photo: Carol Rosegg)

If you’re looking for escapism, best head to the St. James Theatre for Frozen, but if you’d rather see the consequences of our crumbling democracy play out on stage, the Vineyard Theatre’s Is This A Room offers a captivating, if not entirely dynamic, 70 minutes of character study.

And by character, I don’t only mean the complex psychological world of Reality Winner, an air force vet accused and convicted of leaking top-secret documents concerning Russian interference in the 2016 presidential election. Emily Davis delivers a rooted performance as the former N.S.A. translator-turned-whistleblower. So, too, do Pete Simpson, TL Thompson and Becca Blackwell as the trio of FBI agents who arrive unannounced at her Augusta, Georgia, home to interrogate her.

Conceived and directed by Tina Satter, the verbatim FBI transcript serves as the script, and while it certainly delivers moments of suspense, it lacks an arc that could springboard what is now a compelling theatrical exercise into an actual play.

Satter stages the work in a stark playing area designed by Parker Lutz, with audience members on two sides, but it is the addition of brooding sound design (Lee Kinney and Sanae Yamada), original music (Sanae Yamada) and lighting (Thomas Dunn) effects that elevate the work’s more compelling moments from cerebral to emotional, particularly in redacted passages of the document, which leave the audience to fill in the blanks by employing black-outs, and pops of light and sound.

Those familiar with the case will already know the outcome. (It’s no spoiler that Winner is serving a five-year, three-month sentence for her actions.) Until now, though, few have had insight into how her world imploded on that fateful June day. Satter uses the material to expose themes of intimidation, corruption and patriotism. What also emerges, though, are commonalities among suspect and investigators. Winner speaks of her pets, the local yoga studio, a trip to Belize. Simpson, as Agent Garrick, seems most sympathetic to Winner’s situation, but skeptics—or those versed in interrogation tactics—might perceive his friendliness as a means to an end: a confession that he ultimately coaxes out of Winner.

When a crime is committed, the public wants to know the “why,” as if that answer can help us gauge whether or not we believe the act was justified. “I just figured… that this report was just going to be like a-one drop in the bucket,” says Winner. “I felt really hopeless… with everything else that keeps getting released and keeps getting leaked — why isn’t this getting — why isn’t this out there?”

Since Winner’s conviction, others have come forward to expose the treacherous acts aimed at undermining our country’s democracy. They are of Shakespearean proportion, yet all too real. The theater exists, in part, as a public forum to explore, express and react to the world around us. To that extent, Is This A Room, is an important part of the current creative discourse. But does it satisfy as a fully developed theatergoing experience? The jury’s still out.

Is This A Room
Vineyard Theatre
108 East 15th Street, NYC
Through November 10