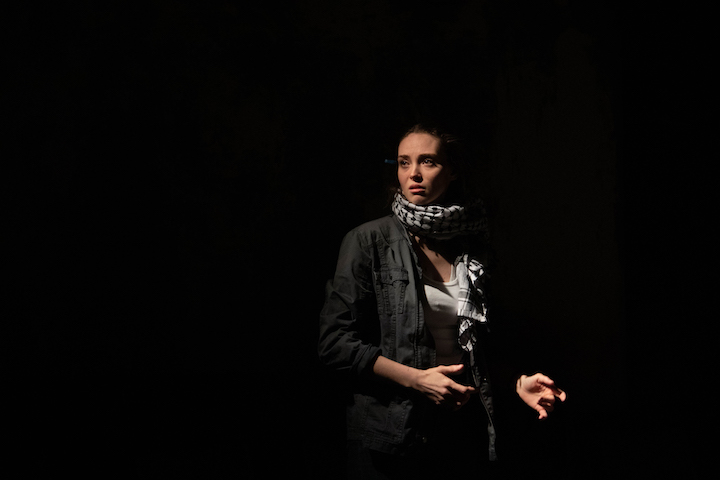 Jacaranda Collective leaves a good first impression on the Chicago theater community with the company’s debut production of My Name is Rachel Corrie, currently onstage at The Den Theatre.

Directed by Sam Bianchini, who also serves as Jacaranda’s Artistic Director, it’s immediately apparent that the company and its work are devoted to intimacy, passion and truth. Ms. Bianchini herself seated audience members in The Den Theatre’s third-floor studio space during last weekend’s press opening and graciously thanked all for coming.

It was not, however, Ms. Bianchini’s excellent manners and hospitality that left an indelible impression on this critic and her companion. Rather it was the material and the one-woman tour de force that is Hailie Robinson, playing the titular Rachel. With minimalist staging and few props except scattered books, journals and articles of clothing, Ms. Robinson tells the true, transcontinental story of a creative young woman from the West Coast who sacrifices herself in service of broader social justice and human dignity.

Adapted by Alan Rickman (per press materials, “yes, that Alan Rickman”) and Katharine Viner, My Name is Rachel Corrie tells the biographical story of a young, Gen X hipster who experiences navel gazing interruptus after the 9/11 terrorist attacks. No longer satisfied with the relatively shallow life of a confused undergrad, Ms. Corrie accepts an invitation to join other “internationals” in non-violent action to mitigate the long-running Israel-Palestine conflict.

We first meet Rachel Corrie as she awakens in her dumpy student apartment, wearing nothing but a tank top and underwear, wrestling with daylight and the larger meaning of her existence. Ms. Robinson quickly takes audiences through Rachel’s Olympia, Washington, backstory: a busy father with a corporate job, an overly involved mother, chain smoker, serial dater, and a list-maker with a limited worldview. She recounts just one early experience outside the borders of her home state, yet the return flight from a teenage excursion to post-USSR Europe left a marked impression.

We don’t have to guess at the impact exposure to a different nation and its culture had upon Ms. Corrie. It’s all there in her scribbled journal entries, lists and plans. Rachel’s own words, brought to life by Mr. Rickman and Ms. Viner, combine with a director’s passion and a performer’s commitment to create an experience of this young woman that is bigger and more complicated than the headlines surrounding her tragic 2003 death. 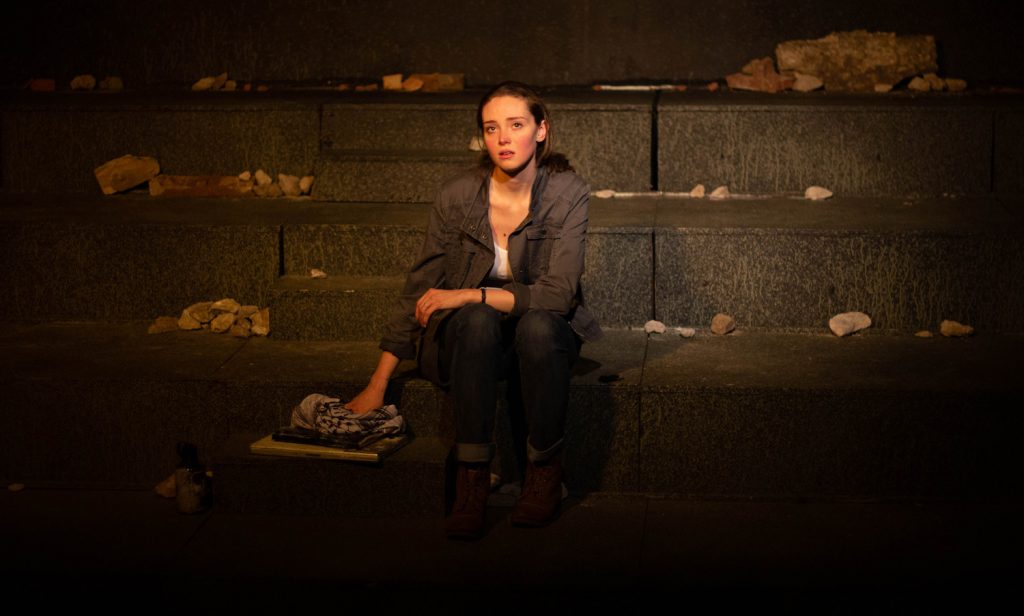 I give away no spoilers by sharing information readily available on the Internet. On March 16, 2003, an Israeli bulldozer crushed Rachel Corrie to death as she stood in front of a Palestinian’s home in an effort to protect it. Just 23 years old at the time, Ms. Corrie’s parents waged a symbolic lawsuit against the state of Israel and its investigators, seeking one dollar in damages in exchange for an admission of responsibility. In 2015, legal action came to an end when the Supreme Court of Israel rejected the Corries’ final appeal.

As such, Rachel’s story lives on through this play, a collection of her own writings, as well as emails sent to her mother and father while the young woman lived in Gaza. As someone who never had a living opportunity to share her art, Ms. Corrie’s legacy is this play, a book of her collected messages entitled Let Me Stand Alone, and a cantata based on her letters, “The Skies Are Weeping.”

As directed by Ms. Bianchini and played by Ms. Robinson, Jacaranda Collective’s team demonstrates that Rachel Corrie was and is imperfectly worthy of artistic tribute. Breathless, funny, self-aware and full of awakening political questions, the dialogue is stuffed with passion and commitment, holding up a modern mirror and offering a challenge to a continuous stalemate that continues to root among the tenuous borders between Israel and Palestine. Decades, nay centuries of lost lives, infrastructure and dignity plague a region and people for whom there are no easy answers.

If this first offering is any indication, Jacaranda Collective arrives as an important addition to Chicago’s theater scene.

My Name is Rachel Corrie
Jacaranda Collective at The Den Theatre
1331 N Milwaukee, Chicago
Through April 6