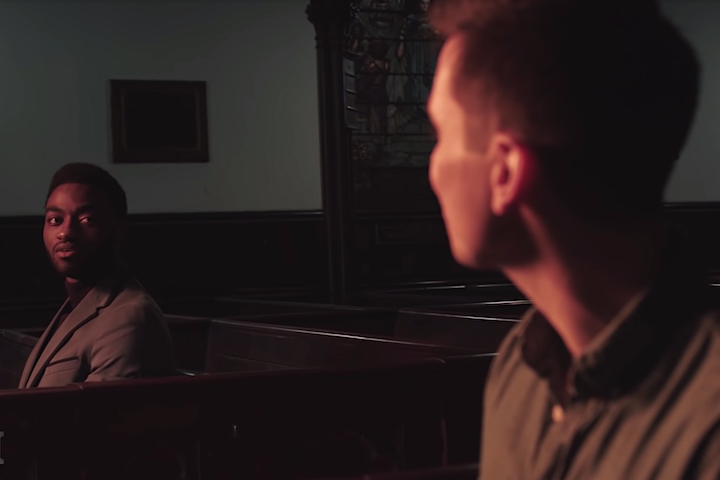 Jelani Alladin and Matt Doyle sing “We Kiss in a Shadow” as part of R&H Goes Pop!
(Video still courtesy of The Rodgers & Hammerstein Organization.)

First, we got some morning glory, and now we have some evening shadows: the new installation in the R&H Goes Pop! series features Jelani Alladin (Frozen) and Matt Doyle (The Book of Mormon) in “We Kiss In A Shadow,” the lovely duet from The King and I about forbidden love.

In The King and I, the characters Tuptim and Lun Tha sing the intimate duet, declaring their love for one another while acknowledging that they ultimately cannot be together publicly, and must hide their relationship from the King of Siam.

Featuring music direction and arrangements by Will Van Dyke, the jazzy, soul-imbued rendition accompanies a music video with Alladin and Doyle. The video demonstrates how, even in contemporary culture, society treats certain loving relationships with prejudice and stigma. “Unfortunately, we are living in a world, in a space, that doesn’t value love of all kinds,” Alladin said in a statement. “This song is our way of understanding how we can begin to accept love of all kinds, to embrace the ugliness, the beautifulness of all of it and understand that we are all human.”

“One of the reasons I was so excited about doing this song, in this context, is how universal these words are,” Doyle added. “Anyone who has felt like they weren’t able to express who they are or how they love can listen to this song and find a connection.”

R&H Goes Pop! began its series with Jeremy Jordan (American Son) singing a new take on “Oh What A Beautiful Mornin’” from Oklahoma!, and continued with a mashup of “Ten Minutes Ago” from Rodgers + Hammerstein’s Cinderella and “The Next Ten Minutes” from Jason Robert Brown’s The Last Five Years with arrangements by Benjamin Rauhala and Kurt Crowley, sung by Laura Osnes (Bandstand) and Jordan. Osnes also hosts the series, which coincides with the 75th anniversary of the first collaboration between Rodgers and Hammerstein.