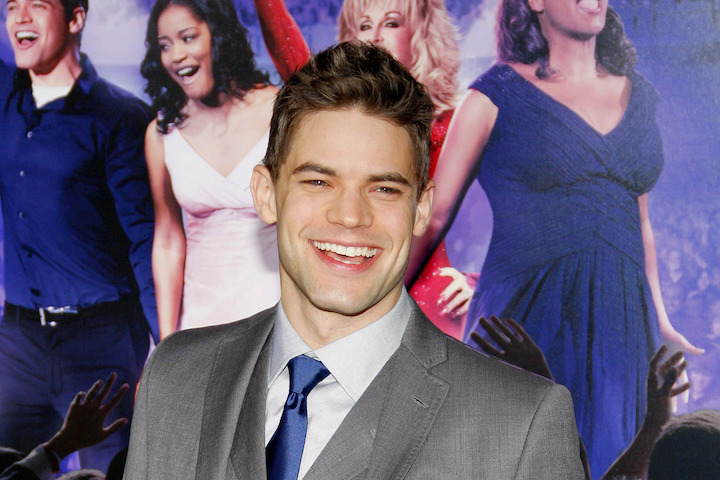 He’s a Tony and Grammy-nominated artist, a television actor from Supergirl and Smash, and a movie star who has appeared with Dolly Parton and Queen Latifah (Joyful Noise) and Anna Kendrick (The Last Five Years). Despite the impressive resume, Jeremy Jordan doesn’t think of himself as successful. The Texas native sat down Monday night with Broadway impresario Seth Rudetsky to explain. “Sure, I’ve had success in my life, but being successful is something that goes away. I always want to be growing as a performer. There are so many things that I still want to do,” Jordan said.

Jordan opened the two-hour show with a parody of Gypsy‘s “Everything’s Coming Up Roses,” followed by an impromptu duet between Jordan and Rudetsky of “Summer Nights” from Grease.

The two then sat stage left and talked about Jordan’s early days in New York. With no prior waiter experience, the would-be Broadway star fabricated his resume with businesses that had closed in order to secure a job at the restaurant 44th and 10th. It lasted for a mere six months before he was cast simultaneously as a swing Rock of Ages and the alternate for Tony in West Side Story.

Jordan relayed a gutsy story about how he stood up to the late Arthur Laurents, book writer and director of the 2009 revival. Laurents, known in the business for being difficult and crotchety, would assemble the cast on a weekly basis and single out one actor who would be his punching bag. Eventually, Jordan’s number was up. “You gave a terrible performance today. I don’t know why you’re even in this show!” Laurents snapped. Jordan, who is self-critical of every performance, defended himself. “Actually, I felt like I had a very good show and the person you picked on last time… they also had a good show!”

Apparently standing up to a Broadway legend didn’t stall his career.

The Newsies star followed the tale with “Something’s Coming” from West Side Story, “Broadway, Here I Come” from Smash, and composer Jason Robert Brown’s “Movin’ Too Fast” from the musical and movie The Last Five Years.

Again, Jordan believed in himself to land the role in The Last Five Years. The director was unsure that he could handle the job, but Jordan bravely penned an email stating that he could be trusted and would do it well. “I really think you have to advocate for yourself,” he said. Inspiring advice.

The night also brought “Santa Fe” from Newsies, a love song from Bonnie and Clyde (which amusingly involved audience participation from a giggly, gushing teen named Keira), a mash-up of the standards “I’ll Be Seeing You” and “Smile,” and the show-stopping “She Used to be Mine,” which Jordan revived the Sara Bareilles tune from Waitress after performing it at last year’s MCC Miscast Gala.

The night ended with an acoustic rendition of “Bring Him Home” from Les Miserables.

Rudetsky, who has toured the country with A-Listers such as Jessie Mueller and Kelli O’Hara, had great chemistry with Jordan. When asked if he was coming back to Broadway, Jordan hinted that he probably will — and it will be a musical. “That’s good,” Rudestky said. “Because that whole straight play stuff… not interested!” Jordan recently closed the Broadway drama, An American Son, which will soon stream on Netflix.

The performance and conversation was the third in a series that Rudetsky has hosted since November, which raises funds for Sandy Hook Promise, a non-profit organization that helps prevent gun violence.