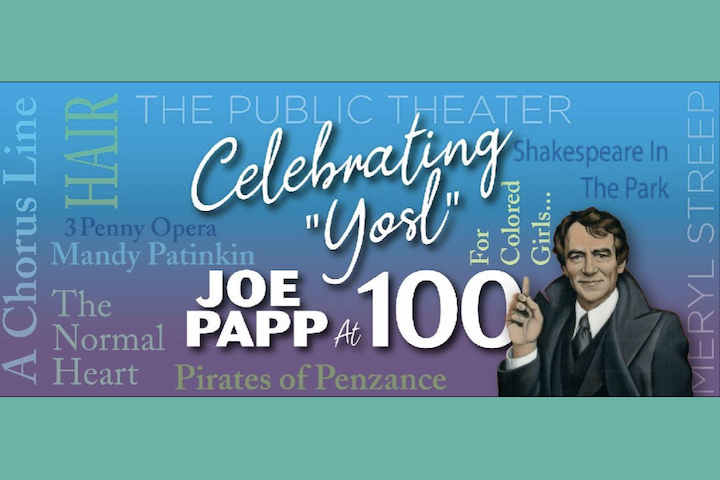 He revolutionized theater as we know it today. Now, Joe Papp, born ‘Yosl Papirofsky,’ will be the subject of a major memorial commemoration on what would have been his centennial birthday on June 22, 2021. This tribute will be presented by YI Love Jewish (a division of Yiddishkayt Initiative).

“Celebrating Yosl – Joe Papp at 100” will be hosted by YI Founder and CEO, renowned actor and Jewish cultural activist Avi Hoffman, who was mentored by Joe Papp in the 1980s. This full day of events will feature live, virtual and pre-recorded performances starting at 11 a.m. and continuing into the evening.

In the spirit of Papp’s visionary FREE Shakespeare in the Park, most of the day’s events will be free of charge except for an exclusive, celebrity-filled LIVE and VIRTUAL Gala and Reception, starting at 7 p.m.

“Joe Papp did more to revolutionize the world of theater than any impresario in the world,” said Hoffman, founder of YI, a global provider of Jewish cultural programming. Hoffman and his mother, retired author, journalist and Columbia University Professor Miriam Hoffman, became friends and colleagues of Papp in NYC in the 1980s, when they launched the Joseph Papp Yiddish Theatre.

After Papp’s death, they continued a close association with Joe’s widow, Gail Merrifield-Papp, and his daughter Susan Papp-Lippman, who will serve as Honorary Chairs of the Centennial commemoration.

Papp’s vision led him in 1957 to establish free Shakespeare in Central Park. Ten years later, he created The Public Theater in the building that was formerly the Hebrew Immigrant Aid Society (HIAS), a haven for newly arrived refugees. The building was saved from demolition through Mr. Papp’s efforts after a long negotiation with the City of New York. It became the permanent home of the New York Shakespeare Festival/Joseph Papp Public Theatre (The Public) and is currently designated as a New York City Historic Landmark.

At the Public, an innovative model was used for creating a new dynamic way of producing plays in a workshop-style manner that had never been tried before. The concept involved bringing writers, directors, designers and actors together in one place to brainstorm and create the foundations for new and groundbreaking productions.

The most famous Broadway shows to evolve from these workshops include the original productions of Hair, A Chorus Line, and Runaways, among the over 700 shows that Joe Papp produced and developed, as well as modern blockbusters like Hamilton. He championed the cause of multi-ethnic casting and socially relevant topics. Papp was a social activist who also helped to develop other off-Broadway experimental theaters, worked to preserve the historic Broadway Theatre District, and was considered one of the most philanthropic providers of inner-city access to the arts, believing that “if public libraries were free, public theatre should be free as well. “

The Hoffmans became affiliated with Papp when Miriam Hoffman, a journalist for The Jewish Daily Forward, did an interview with the theatre icon in 1985. Both she and Joe quickly bonded over their mutual love for Jewish culture and the Yiddish language, an identity that Papp kept private for much of his career.

During the 1980s, the Hoffmans were working on several Jewish and Yiddish productions in NYC. At one point, a conversation between Hoffman, his mother and Papp occurred, where they said, “Joe, we want to do Yiddish theater, and we want to create it with you.” Papp‘s response was, “Let’s create a Joseph Papp Yiddish Theatre and transform the Yiddish theatre world.” Avi and his mother were able to do a small production of a groundbreaking Yiddish/English musical at the Riverdale Y in The Bronx called Songs of Paradise (Lieder fun Gan Eydn). Papp came to opening night, loved the show, and opened it a month later at his theater in Manhattan. That production became one of the longest-running shows in the history of the Public Theater.

Fast forward to 2016, when Joe’s daughter Susan shared with Avi an audio recording of her father’s 1978 concert series at a venue in SoHo titled Joe Papp at the Ballroom.

“I was blown away because I never knew that Joe had a flair for singing. Included in the one-man show were personal stories of his life and career interspersed with his favorite tunes of the day.  It was the only concert series that Joe had ever performed,” said Avi Hoffman.

One of the signature events will feature Avi’s re-creation of the Joe Papp at the Ballroom performance, based on the transcript, including added dialogue, quotes, and additional material from the Papp Archives. He will also be sharing personal recollections of his relationship with Papp.

3 p.m. EST — An Interview with Tracie Holder Producer/Director of the acclaimed documentary “Joe Papp in 5 Acts”