Top Posts
‘Company’ to Hit the Road on North American...
Meet the Full Cast of ‘Shucked,’ Coming to...
Full Cast for ‘Parade’ Announced
Stephen McKinley Henderson Gives the Performance of His...
The McKittrick Hotel Announces the Return of ‘The...
Broadway Stars Honored with Academy Award Nominations
Taylor Trensch, Danny Wolohan, and More Join the...
A Gay Road Trip Comes to The Brick...
Maude Apatow of ‘Euphoria’ is the Next Audrey...
Tony Award Winners to Star in ‘Hercules’ at...
Home Beyond Broadway Her Favorite Things: ‘Julie Madly Deeply’
Beyond BroadwayReviews 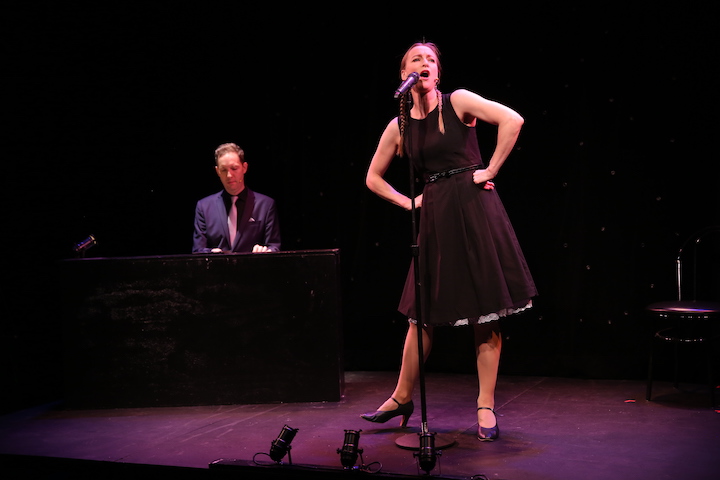 In the opening moments of Julie Madly Deeply, a cabaret show about Julie Andrews that needs more than a spoonful of sugar to make it go down, musical director/accompanist Michael Roulston says, “This isn’t a show with Julie Andrews. No one here is Julie Andrews. But tonight we have the next best thing.” He then introduces Sarah-Louise Young, the British singer-actress who wrote the show and stars in it. Young is lively, fast-talking, attractive, and hardworking but “next best thing” to Julie Andrews is not what comes to mind.

Julie Madly Deeply (reported to have played to sold-out houses in London and Toronto) is part of this year’s Brits Off Broadway festival at 59E59 Theaters. Young, a rabid fan of Andrews, devised it in 2013 as homage to the beloved stage and screen star, who introduced such iconic characters as Eliza in My Fair Lady, Guenevere in Camelot, Cinderella in the TV production of Cinderella, Maria von Trapp in The Sound of Music, Mary Poppins, Millie in Thoroughly Modern Millie, and Victoria in Victor/Victoria.

As standard in such shows, Young fills the two acts of her hour and 55 minutes with familiar biographical facts, anecdotes, and songs. Occasionally, Young is joined in duets with Roulston, a fine baritone who stays on key more consistently than she. While Young does well enough in the lower registers, she struggles in the higher, where she comes close to shrieking. Julie Andrews, who had a four-octave range before the setback of having non-cancerous nodules removed from her throat, deserves someone better equipped to embody her popular numbers. 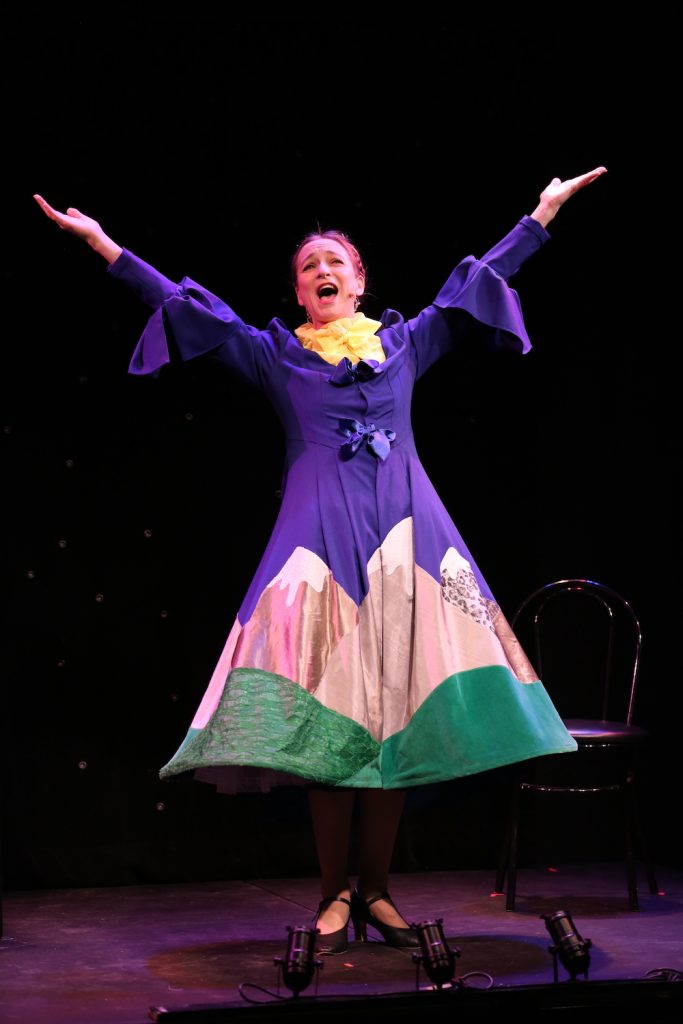 Theater B, 59E59’S mid-sized venue, has been converted into a cabaret space, with most of the audience seated on uncomfortable folding chairs around tiny cocktail tables. The stage is little more than a functional platform, with a black backdrop; regrettably, there are no projections. Most of the time, Young wears a black dress with jumper-type bodice and a silver sequined lower hem; in the second act, she appears in a bizarre gown (later removed) with mountains (“the hills are alive”) adorning its lower half. (Anna Braithwaite is the designer.)

Julie Madly Deeply is as much about Young’s adoration of her idol as it is about Andrews herself. She interacts considerably with the audience, even asking people about when they first saw Andrews in person. One man when I went recalled seeing her as far back as The Boy Friend, which would have been 1954. Whenever someone mentioned seeing Andrews in something that Young missed, she oohed and ahhed with envy. A middle-aged woman’s astonishing confession that she’d never seen nor heard Andrews energized Young into enthusiastically encouraging the woman about what to look for on the Internet.

And, for those who know the lyrics, audience members get a sing-along moment at the end when they’re asked to join in on such songs as “A Spoonful of Sugar,” “Wouldn’t it Be Loverly?,” and “Supercalifragilisticexpialidocious.”

As she saunters through Andrews’s life, dropping once-famous names in every breath, Young also impersonates a few. We get, for example, a fairly good Liza Minelli and a quite good Audrey Hepburn. We also get, however, New Yorker Moss Hart speaking in a pronounced Russian-Yiddish dialect as he directs Andrews in My Fair Lady, and, because she never heard Oscar Hammerstein II, another New Yorker, she imagines him drawling like a cowboy in Oklahoma! These choices are D.O.A, as is a lot else meant to be funny.

As directed, by Russell Lucas, Young, who moves well, overdoes her physical business and gestures. Still, for fans of Andrews and the songs from first-class musicals she made part of our everyday experience for so many years, even less than perfectly performed versions of “Perfect Young Ladies,” “The Sound of Music,” “I Could Have Danced All Night,” “Feed the Birds,” “Do-Re-Mi,” “You and Me,” “Could I Leave You,” “Le Jazz Hot,” “Edelweiss,” and others, are entertaining enough to help paste over the show’s obvious cracks.