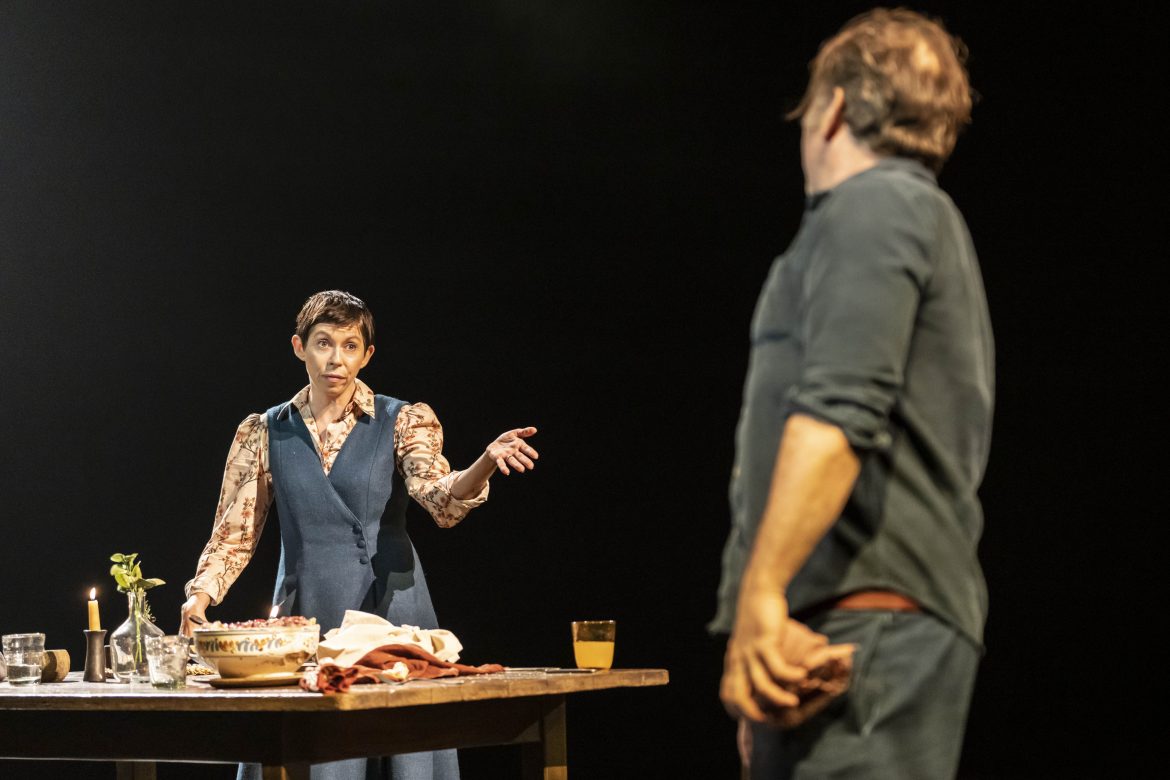 Eileen Walsh (Elizabeth Proctor) and Brendan Cowell (John Proctor) in ‘The Crucible’ at the National Theatre. Photo by Johan Persson.

Just in time for Halloween, witches come to England.

Or do they? That’s the question at the core of Arthur Miller’s classic allegory, The Crucible, now playing at The National Theatre in London. The production may only be running until November 5, but it will broadcast in cinemas via NT Live shortly thereafter: on January 26 in the UK and March 2 in the US. Given the spooky elements at play, it’s a perfect rainy day activity.

Speaking of rain, Lyndsey Turner’s lean, assured, and spare production employs water effects to mark scene transitions: a perimeter of rain pours down on the stage bringing doom and gloom to the town of Salem, Massachusetts where, one by one, citizens of the Christian, colonial New England town are named as being sighted or instilled with the devil.

John Proctor is the play’s moral and narrative center, and Brendan Cowell takes on the meaty role with the grace it demands. His is a refreshing, restrained, and fully realized performance. As his wife Elizabeth, named a witch, Eileen Walsh effectively conveys the fragility of her family’s web of lies, a house of cards poised to fall at any moment.

Most potent is Tim Lutkin’s haunting lighting design, which plunges the upstage portion of the Olivier Theatre into darkness; when characters appear, it seems they’ve popped out of a shadow. Occasionally, however, the upstage area does alight to reveal a chorus of teenage girls. They practice witchcraft and are led by the adolescent Abigail (Erin Doherty). In that pivotal role, Doherty shows a clear trajectory of Abigail, who is having an affair with John Proctor, understanding the gravity of her words, which she uses to turn her community upside down. Her icy performance is warmly contrasted by some other standout performances, including Karl Johnson as town elder Giles Corey and Rachelle Diedericks as the meak Proctor maid Mary Warren.

Another celebrated European director, Ivo van Hove, recently staged a revival of The Crucible, which appeared on Broadway. While it had theatrical flourishes expected of van Hove, not all of them worked; one showed a girl flying like a witch despite the cold truth that there is no sorcery alive in this town. It is with great sturdiness that, in her production, Turner abides by the text while still adding in a brief prologue and epilogue, spoken by the chorus of girls, that merely help further contextualize instead of distract from the piece.