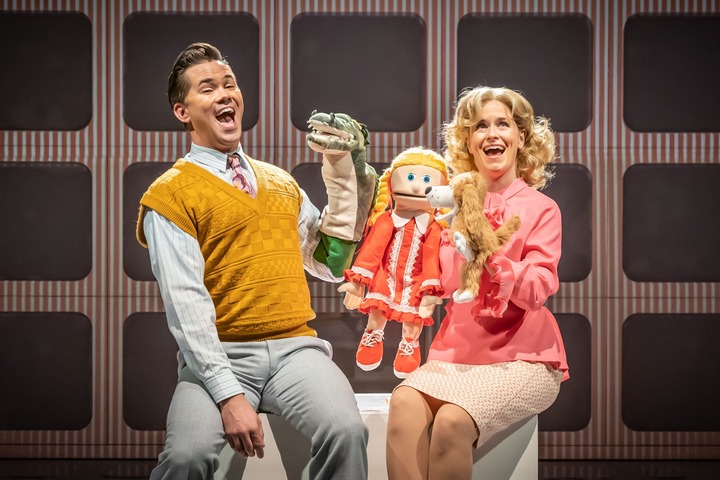 31
Andrew Rannells and Katie Brayben in ‘Tammy Faye,’ photo by Marc Brenner.
by Billy McEntee
If Tammy Faye succeeds at one thing, it scores in affirming its titular character is indeed a gay icon. When cancer invades her colon, she jests with her homosexual doctor about him, too, being familiar with blood coming out his butt; she cozies up with the queer staff on her hit network Praise the Lord; and she thanks “you know who” for forwarding her career. God? No: the gays.
Believe it or not, all of this is handled with great grace and wry wit. It should be no surprise the musical’s agenda is this clear: the direction is by Rupert Goold (who exalted another legend in his film Judy), and king of queers Elton John provides the music. Plus, Faye, the famed American televangelist who enjoyed a meteoric rise to and catastrophic fall from fame, certainly lived a life that welcomed the LGBTQ+ community when so many other people of faith preferred it did not exist.
Tammy Faye, now playing at London’s Almeida Theatre Company, traces this late-twentieth century trajectory in a rather straightforward autobiographical musical while still offering Katie Brayben a blazing star vehicle. Brayben shines as Faye and imbues her with rich three dimensionality. The same cannot be said for the other roles, including her husband, Jim Bakker, played by Andrew Rannells, who does his best with thin material. The premiere talks (and sings) a lot about heaven, but it still feels like it’s in purgatory.
Spanning four decades, the musical covers Bakker securing a network, Tammy becoming its surprise star, the marital strifes between the two, and how greed and corruption led to their marriage and career’s demise. It’s a lot to package into two and a half hours, and John’s score could lose and gain some songs: Rannells, for one, hardly gets a number to himself, even though the musical touches on Bakker’s suppressed queerness and difficulty accepting Tammy’s fame. Both felt like opportunities to further flesh out Bakker in song. Tammy’s numbers, and those she shares with Bakker, are gospel-infused, poppy, and quite memorable; when tertiary characters get songs, however, it only makes you crave Tammy’s next big one.
John Graham’s book and Jake Shears’ lyrics waffle between great one liners (“It’ll be like Disney World, but for good people,” Bakker says of the Praise the Lord vacationland) and low-hanging fruit (Faye’s Christian albums offer “the sound of God coming in your ears,” and there are a few heavy-handed MAGA references forecasting how theocracy still holds a tight grip on American politics).
Nonetheless, Goold’s tight production and Brayben’s central performance mostly hold the show together, fluidly showing Faye’s rise in Act I but too quickly rushing her fall in Act II. Bunny Christie’s set design effectively features a five by five standing grid of televisions, onto which live footage of Tammy and Jim are projected, and Katrina Lindsay’s costumes ground Faye while also showing off her fabulousness as wealth and celebrity corrupt her career. There’s no shortage of sparkly jackets and rainbow lights.
Gay jokes aside, the musical is most affecting when it lets Faye do what she does best: connect with an audience. In her first solo appearance on live television, Brayben is tremendous in showing Faye’s vulnerability and tender openness, deftly moving from discussing her family to breaking into song. The audience here plays its most active role: we become the camera that first held its gaze on a star mid-bloom all those decades ago. She really is a wonder to behold.
Tammy Faye
Music by Elton John
Lyrics by Jake Shears
Book by James Graham
Directed by Rupert Goold
Playing at Almeida Theatre Company through December 3
Katie Brayben is Divine in ‘Tammy Faye’ Musical at Almeida was last modified: October 30th, 2022 by Billy McEntee
31
almeidatammy faye
0
Facebook Twitter Google + Pinterest
previous post